The book had led me to believe that the town of Sarria might reward a few extra hours of exploration, so, despite the ridiculously short walk from Triacastela, I decided to spend the night there. But the book was wrong. Sarria has a few old buildings, but they were neither old enough nor interesting enough to tempt me to pause over them, particularly when I have spent the last month doing little else but walking and admiring old buildings.

By the time I realized that I didn’t really want to linger in Sarria, it was too late; I had already checked into an albergue. Since I had some unexpected time, I pulled out my guidebook and did a little figuring. The book divides the distance between Sarria and Santiago, roughly 120 km, into five stages; if I were able to do this in four stages, instead, that would buy me an extra day to spend at the end of the world, Finisterre. It would also knock me off the Brierly schedule, which might ameliorate the surge in pilgrims that supposedly crowds the Camino between Sarria and Santiago – Sarria being the last place of any consequence where a pilgrim can start walking and still receive a “Compostela,” which used to be a ticket out of Purgatory and now is simply a souvenir (unless I’m missing something).

So that’s what I’m doing. I’ll be in Santiago in two days.

The walking is lovely. The countryside here in Galicia is lush, even by the standards of my first day, when I crossed the Pyrenees. The oaks and chestnuts bend under the weight of their own history, the cows and chickens busy themselves with no concern for history at all, and the stone walls mutely and obstinately decline the opportunity to reveal anything to me. I can’t tell how old they are, I can’t tell what purpose the original buildings might have served, I can’t tell why or when the ruined buildings fell to pieces.

I spent last night in Gonzar, a town that appears to have been named after a Star Trek villain. I remembered that the town’s only private albergue was “Casa (some common Spanish surname)”, so when I saw a building with Casa Gonzales in wrought iron over the door, I walked right in. “Hola?” I called. Perhaps recepción was at the end of this hallway. As I approached the far side of the house that, it was quickly becoming apparent even to a fool like me, was a private residence through which I was traipsing unannounced and uninvited, I heard someone at the top of the stairs. The Spanish woman was very nice as she shooed me out of her home. Casa Garcia was right around the corner.

Tonight I’m in Melide, which I have hardly seen, because I’ve been busy with my laundry and other chores since I arrived. The narrow streets through which I walked on the way here may be worth visiting as the city comes to life after the siesta, and the old church may be pretty, and I may be able to find a good place to eat – all I know for sure is that the crowded room into which I was placed smells like eight or ten people who have just walked 500 miles. The windows are wide open, but that hasn’t helped.

I have taken a shower and done my laundry, so I can take some comfort in the knowledge that I am not to blame while I suffocate in the monkey-house reek.

At the suggestion of my brother, John, I have made an effort to take a few pictures of some of the people who have appeared in these posts. This has taught me that the people to whom you hand your camera when they offer to take your picture do not, as a general rule, have the slightest idea what they’re doing. 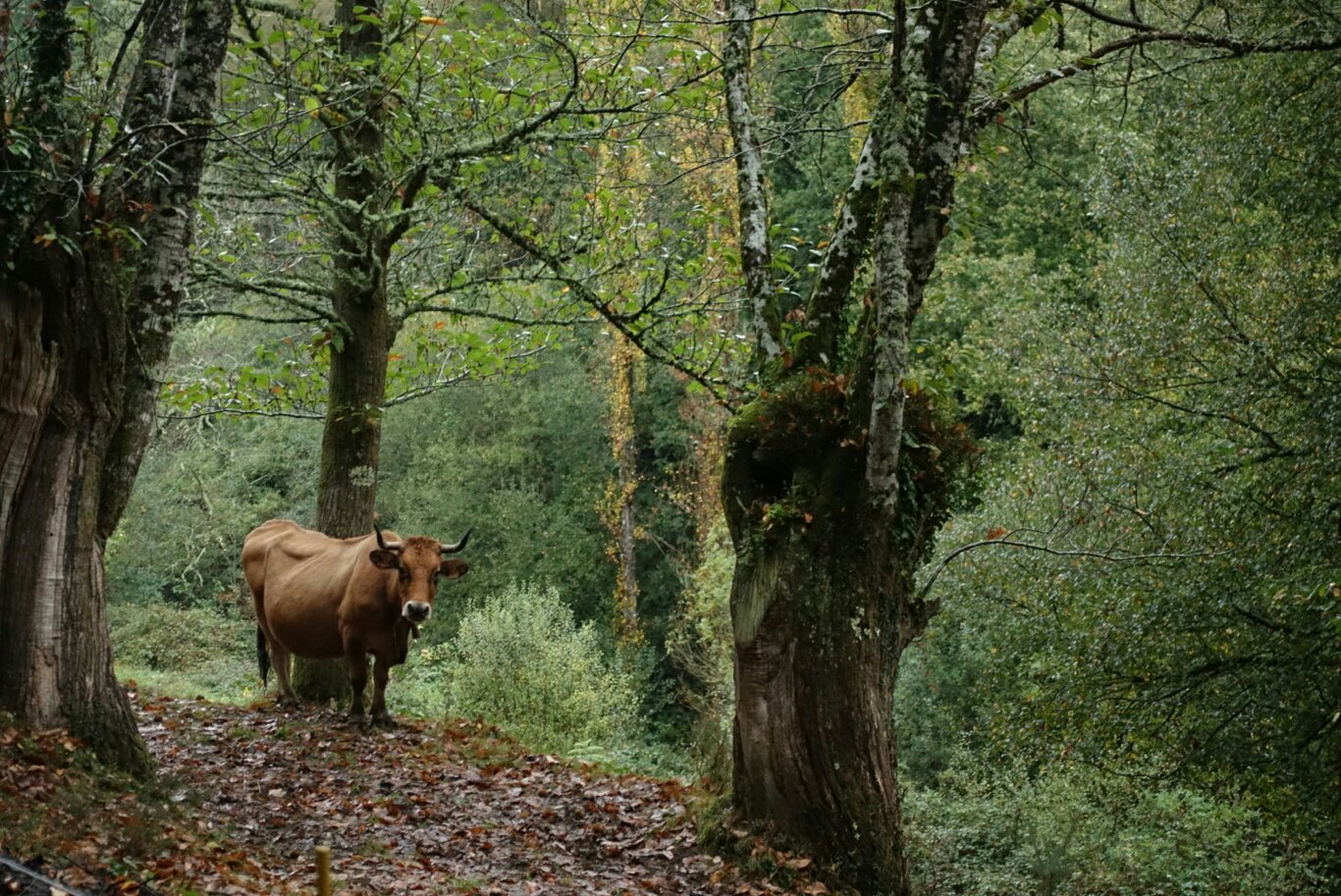 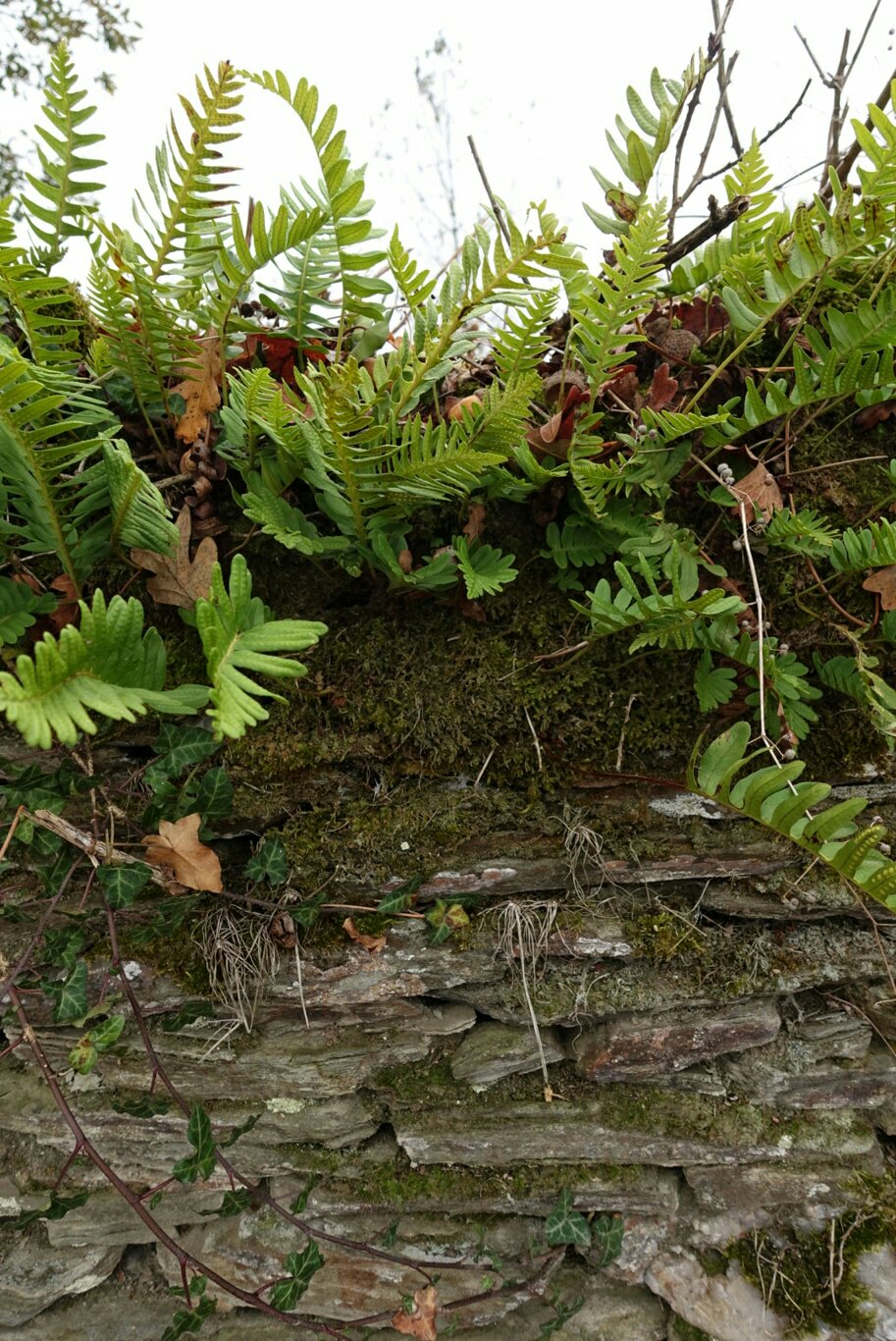 Acorns and ferns atop an old wall. 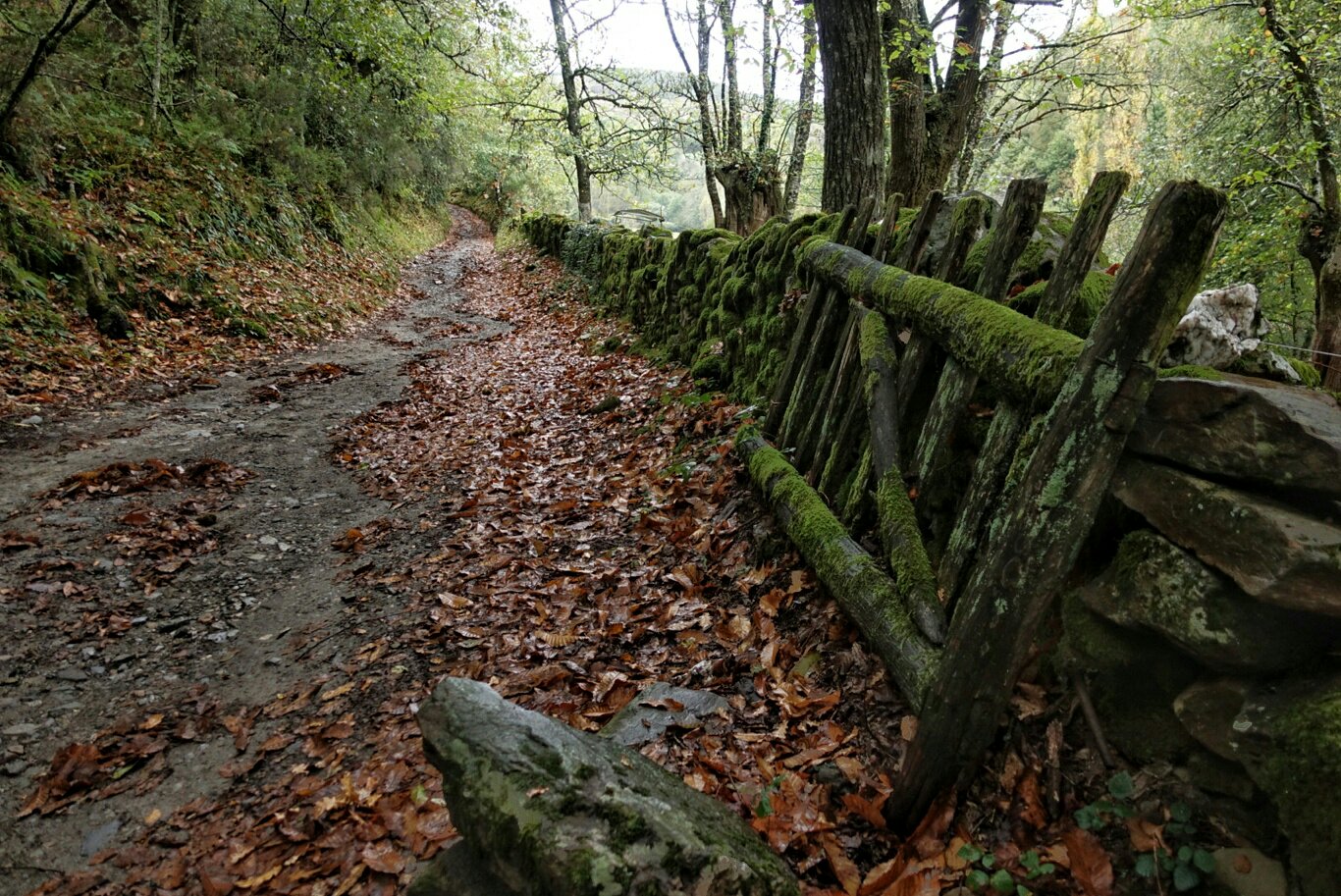 The Camino in Galicia. 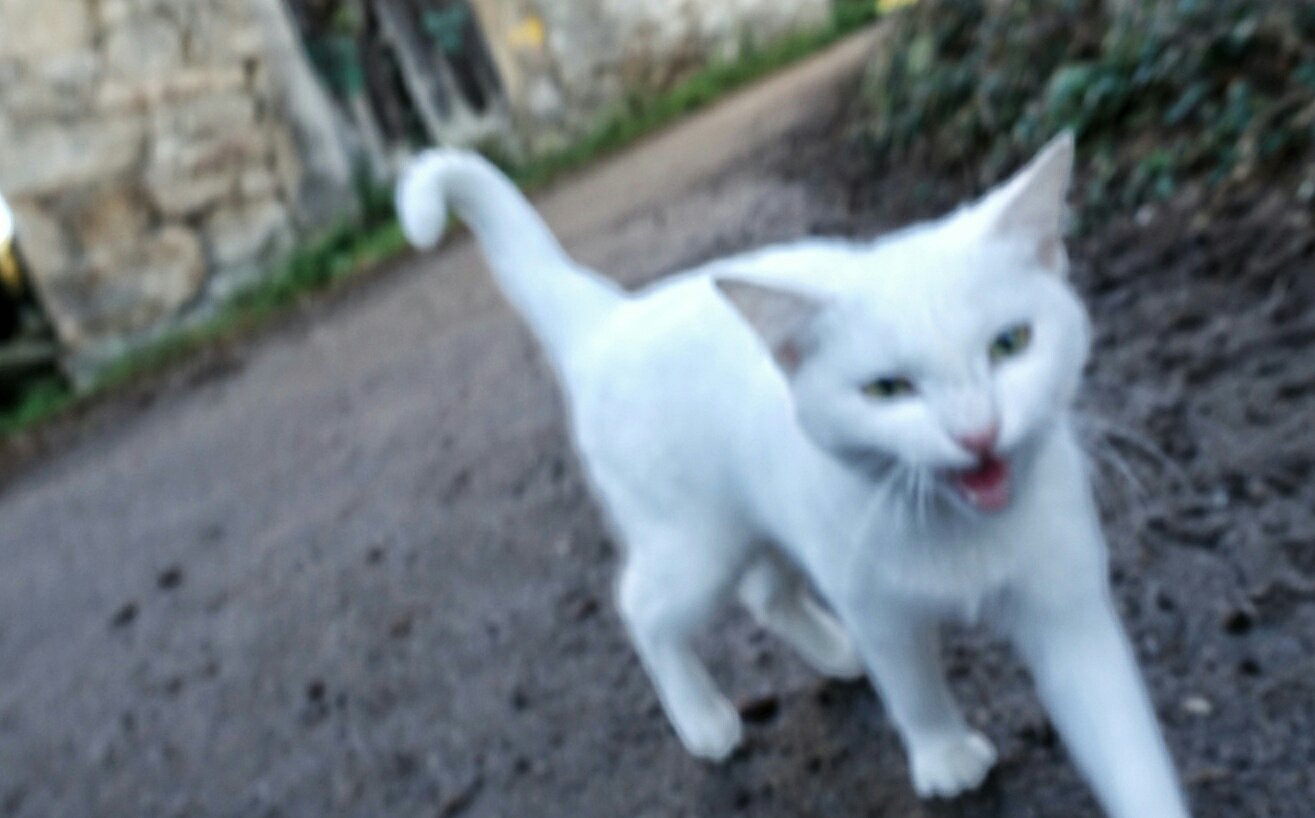 The friendliest cat in Spain. I couldn’t get far enough away from him to get a decent picture. 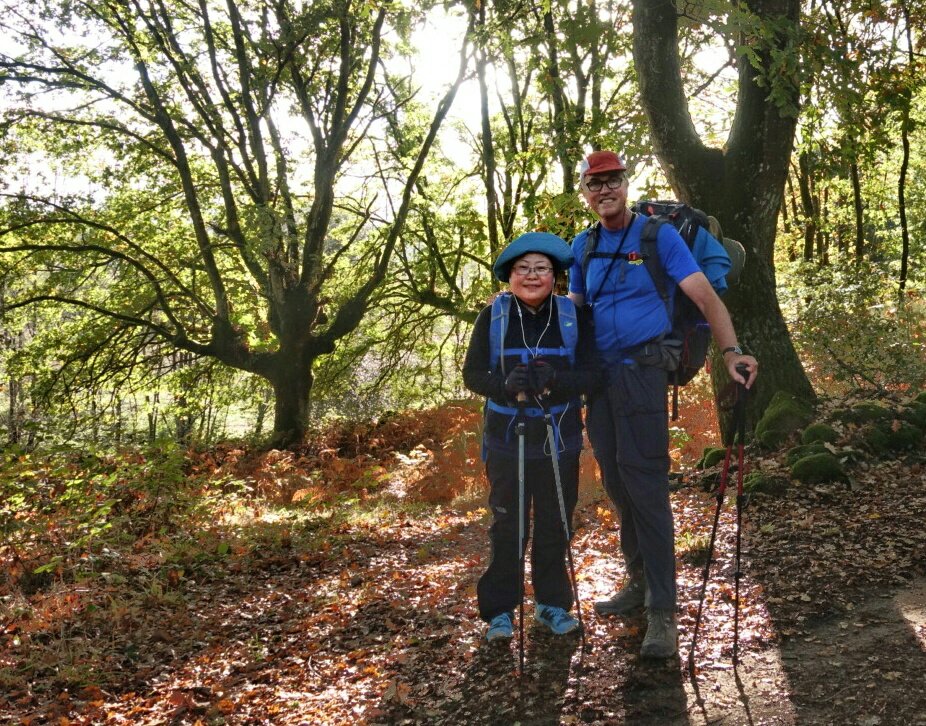 This is the intelligent young woman who showed me her new pack in Leon. Her name is Xiang Hua. I have spent more time walking and talking with her than with anyone else I’ve met on this trip. 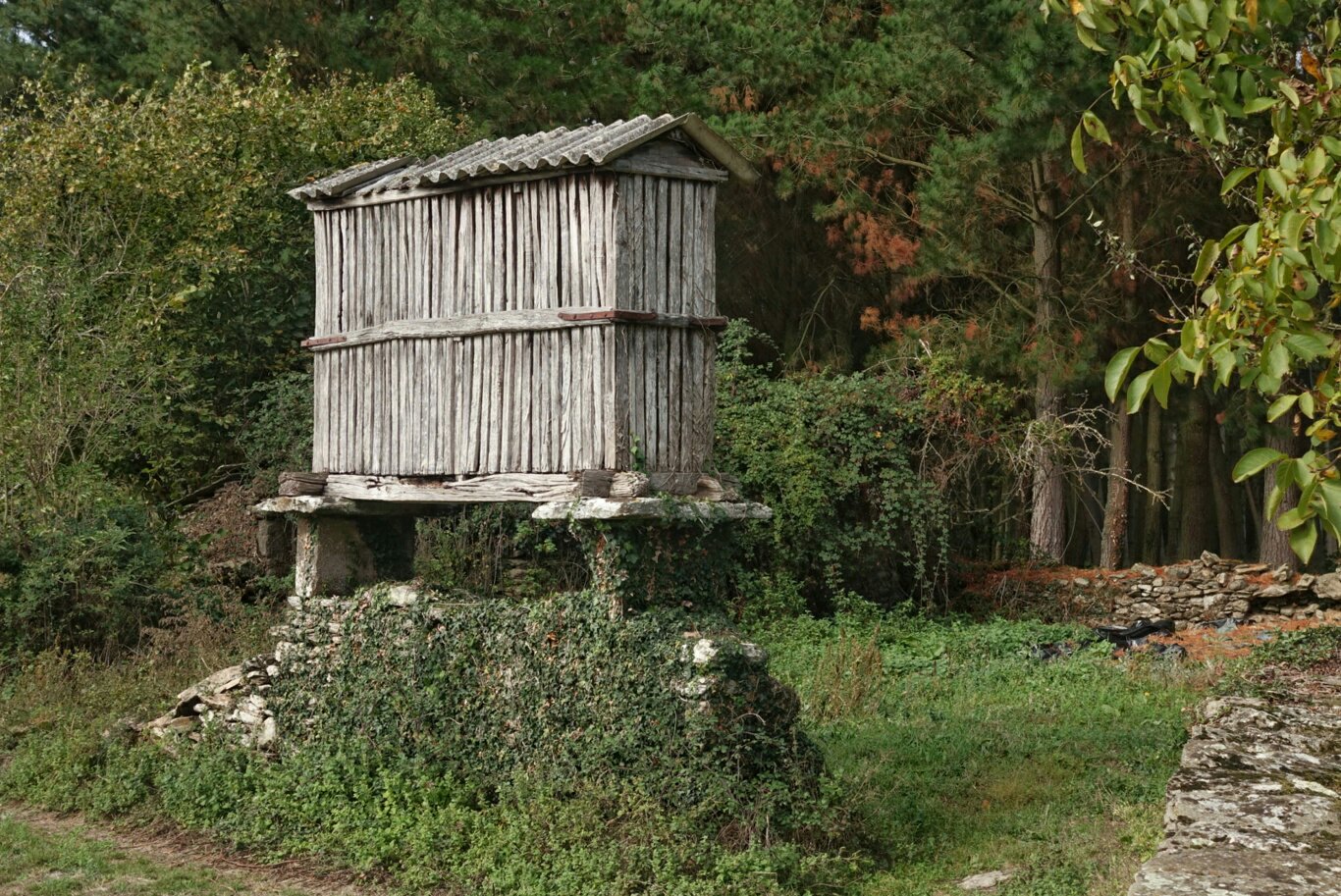 This is an hórreo, a way of storing corn away from water and rodents. They are everywhere in Galicia. 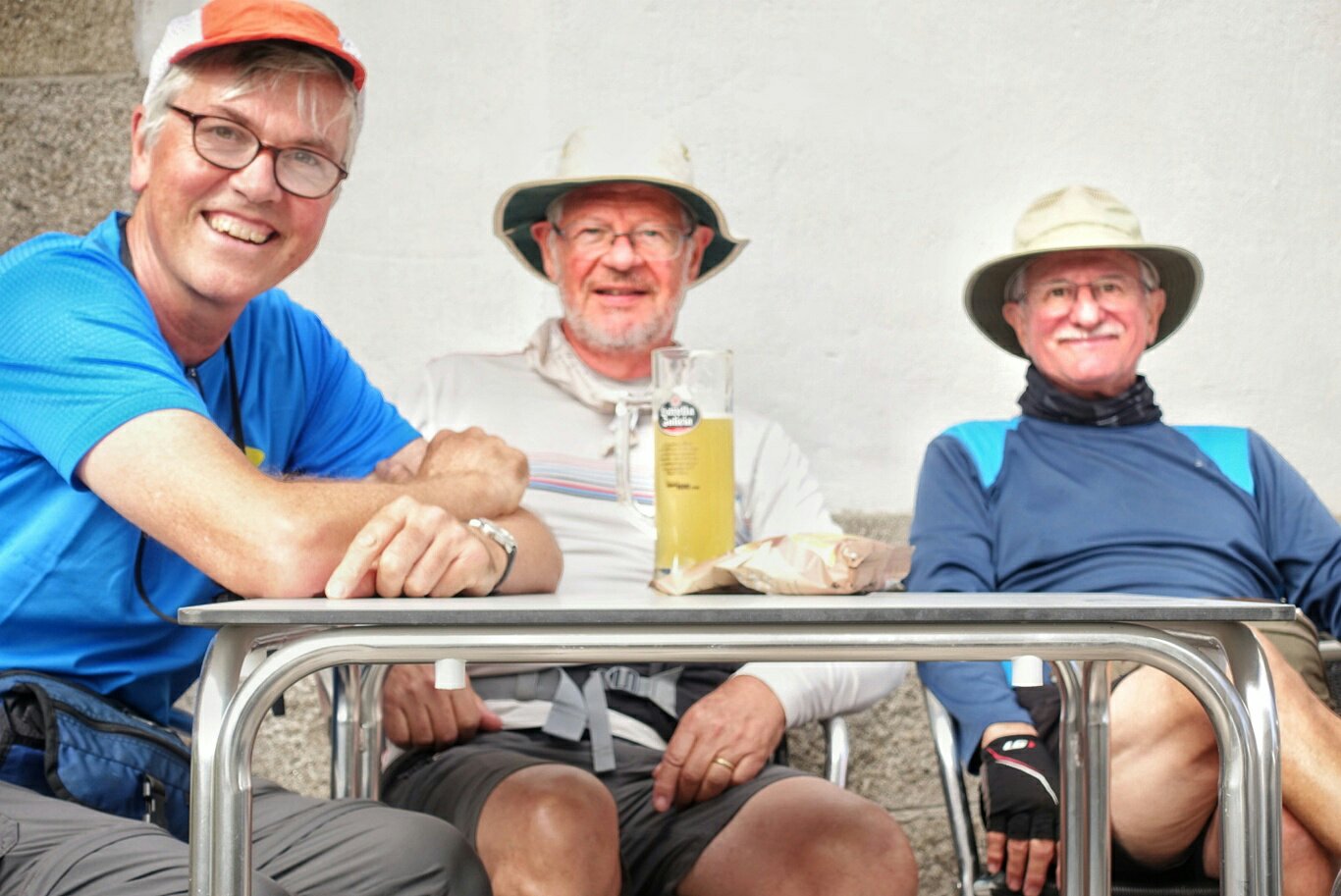 Here I am with the two “Jimmy Stewart” guys, John and Dave. 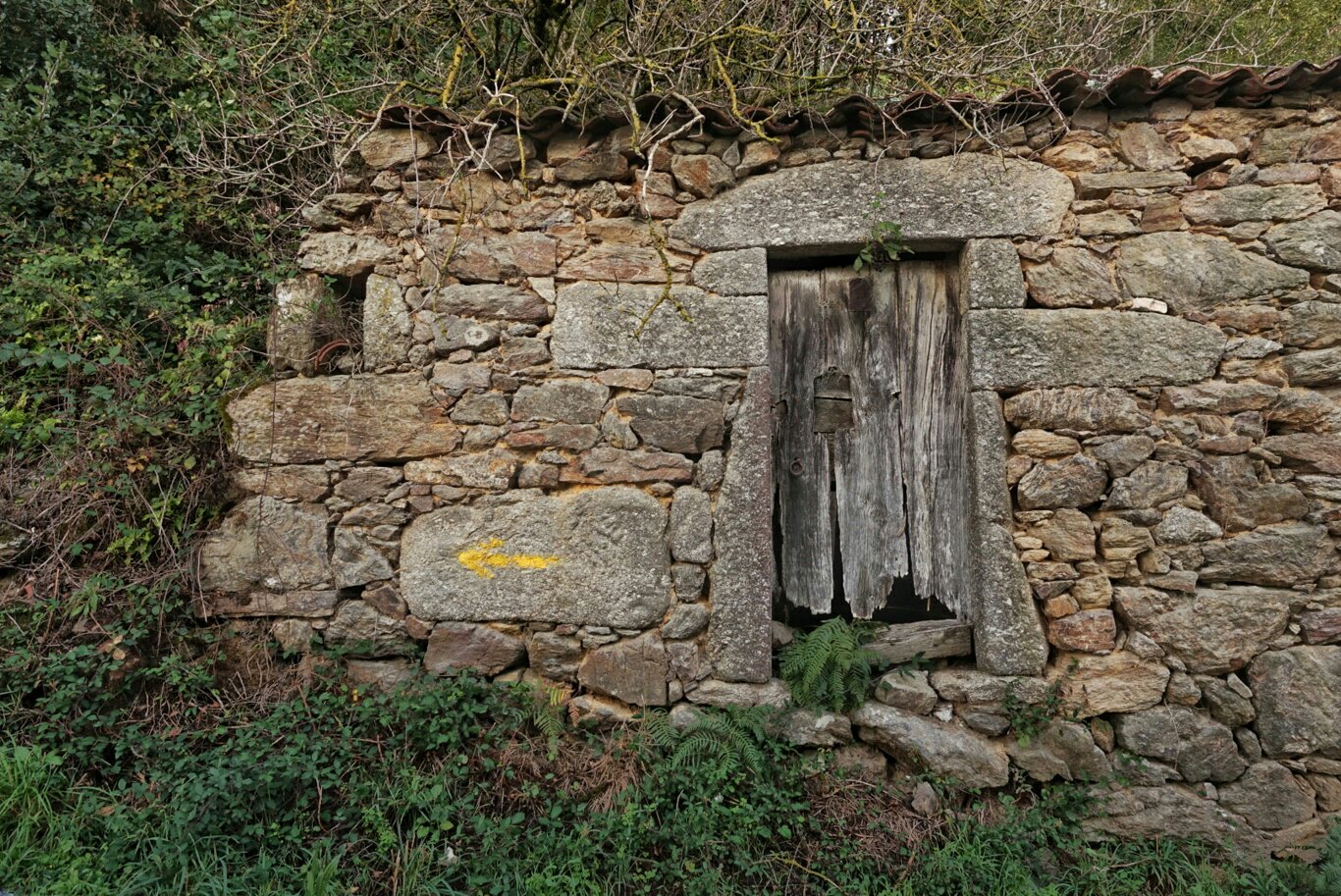 The priest whose bust I included in a recent post came up with the simple idea of marking the Camino with yellow arrows, whenever there is any doubt about which way to turn.