The meseta has a bad reputation among pilgrims. The word means “plateau” – it is a high, arid region where agriculture is often reduced to barley, oats, and rueful countenances*, and where the sun can be unforgiving at the height of summer. The name of the village where I spent last night, for example, translates to “Little Furnace of the Camino.” I had heard that there is little shade and little to look at, for the entire trek between Burgos and Astorga – perhaps ten days of hiking. One American I met told me that he had heard it was “like walking across Kansas.”

After having spent two days on the meseta, it seems to me that the warnings and complaints I’ve heard have probably been coming from that large class of people who cherish their opportunities to warn and complain. It is true that there is little to look at, I suppose, but every time a ruin or a town, or even a tree, heaves itself up onto the horizon, it appears to have been framed there on the skyline by the entire universe, just to help us remember to admire it. And I’m sure the heat is terrible in August – but it’s October. I’m enjoying myself.

Yesterday, for the first time, people started asking me how many times I’ve done the Camino. It’s possible that we have started to leave behind the people who were unable, through training or luck, to reach the 200-mile mark**, or maybe those of us who have elected to walk across the meseta (instead of taking a bus, as so many pilgrims do) are the type to have done this multiple times. We are the people who laugh when we see the graffito that is scratched into an underpass, back by Logroño: “WHY ARE YOU DOING THIS? WHY?”

I have seen a few people who have been taken off the Camino by injuries. One woman was led out of the albergue by medical professionals at San Juan de Ortega because she was no longer able to put any weight on one of her ankles, and yesterday an American woman started the day feeling fine but, by the end, had developed a knee problem that left her hardly able to manage a flight of stairs. On the other hand, some people whose sphericity would never allow you to mistake them for athletes are still chugging along uncomplainingly. A woman I met in Roncesvalles had had knee surgery relatively recently, but there she was, at the Museum of Human Evolution in Burgos. A woman of 79 or 80 is walking the Camino for what I believe she said is her 18th time; yesterday she took a hard fall, but tonight she is here at my albergue, chatting happily with her fellow pilgrims about the dinner they’re serving us tonight. People are inspirational.

The best thing about the last few days has been the people I’ve met, who have always been friendly and, unsurprisingly, committed to muscle-powered entertainment. I’ve been making an effort to hang onto people’s names – never an easy thing for me – and the effort is paying off. Just this afternoon, while resting in the shade in the courtyard of a lovely old church, a young woman in a floppy hat appeared around a corner and said, “Hi, Jim!” “Hi, Anna-Marie,” I was able to triumphantly reply.

Other people seem to have a much better idea of their schedules than I. More than once, I’ve been forced to admit that I had no idea where I was going to spend the night, even though I’d already been hiking for hours. Just yesterday I was shocked to discover that I was arriving at the destination I had been shamed into establishing, Hornillos del Camino, at noon, having covered my 20 kilometers since breakfast without really noticing. The next reasonable stopping point was another 10 km down the road, though, and the town seemed nice, so I called it a day. I had an excellent communal dinner at the albergue, and met people from Seattle, Tasmania, Florida, the Netherlands, Australia, and Ottawa; it’s hard to believe that I lost anything by spending the afternoon there.

Another communal dinner is scheduled for 7:00 tonight, at the albergue here in Castrojeriz. I plan to devote the next couple of hours to visiting the ruined castle on the hill above the town; if I leave at 5:00, I should have left the worst of the day’s heat behind me, and I should have no trouble getting back in time for dinner. I have asked two people about how to get up there, and both of them have told me to walk along the road. My map shows a trail network, though, and the aerial photographs show trails, too, so to hell with their stupid “local knowledge.” What could go wrong?

I would close by telling you where I’ll be spending the night tomorrow, and how distant it is, but honestly I have no idea.

* I am reading Don Quixote for the first time. Don Quixote has been dubbed “The Knight of the Rueful Countenance” by Sancho Panza.

** Having just done the math, I have learned that Castrojeriz is 203 miles from St. Jean Pied de Port, where I started the Camino. Passing 200 miles feels like an achievement. 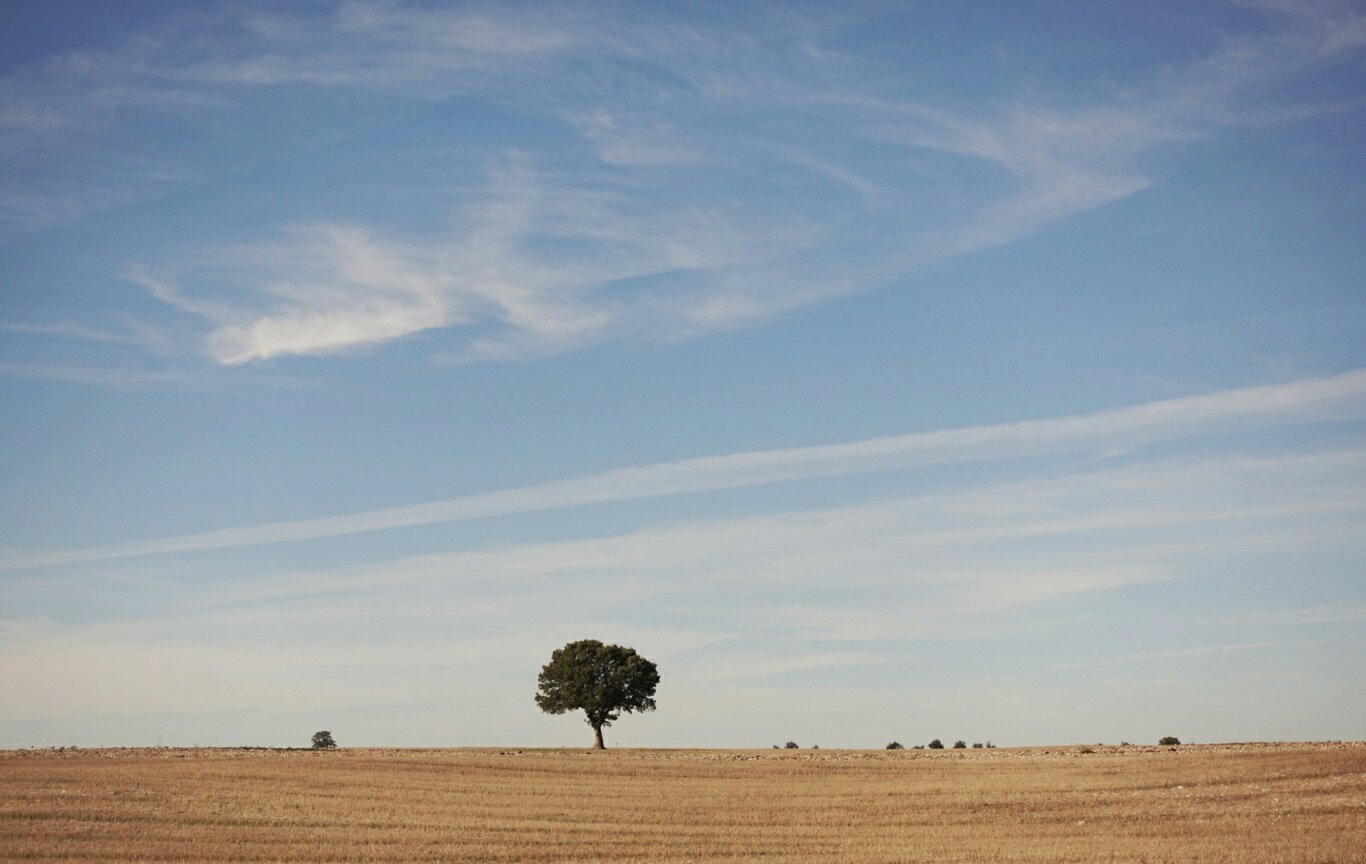 A tree, framed by the universe on the meseta. 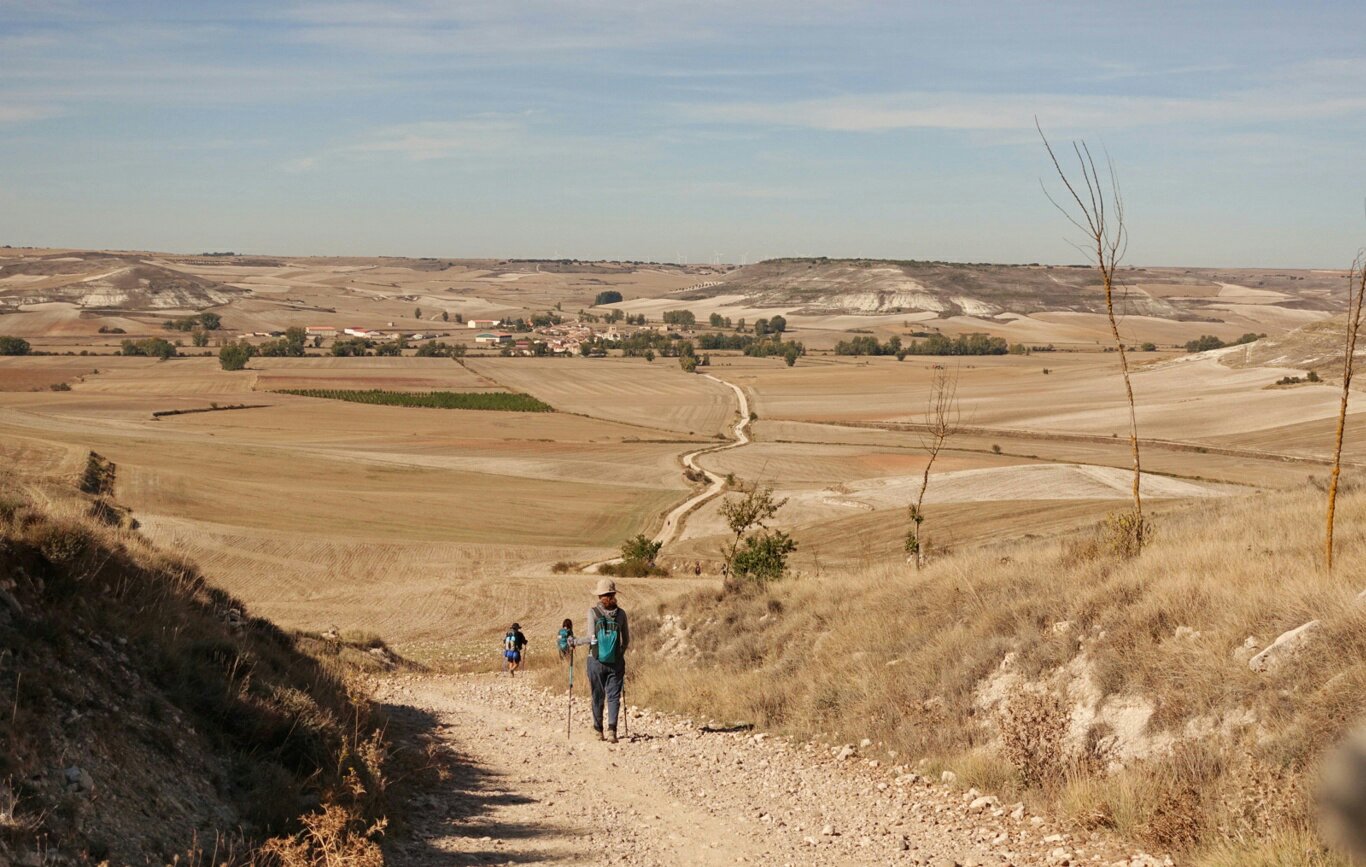 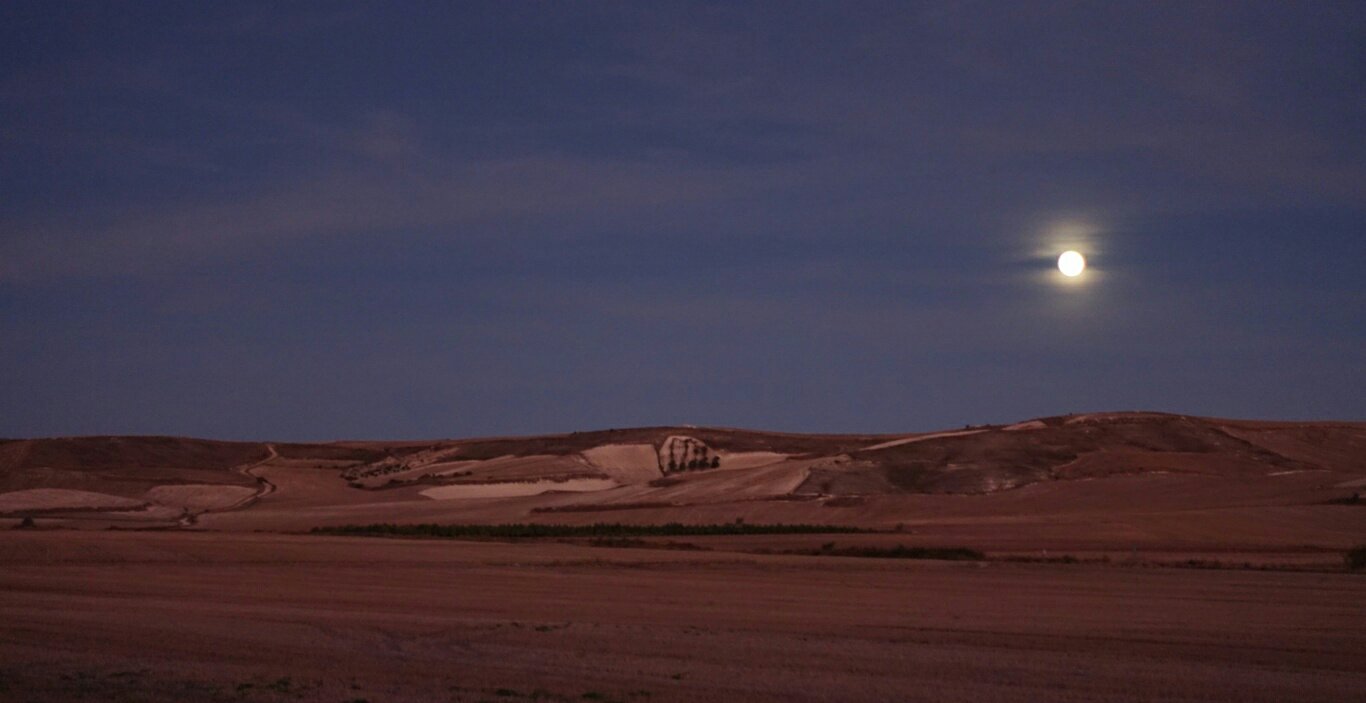 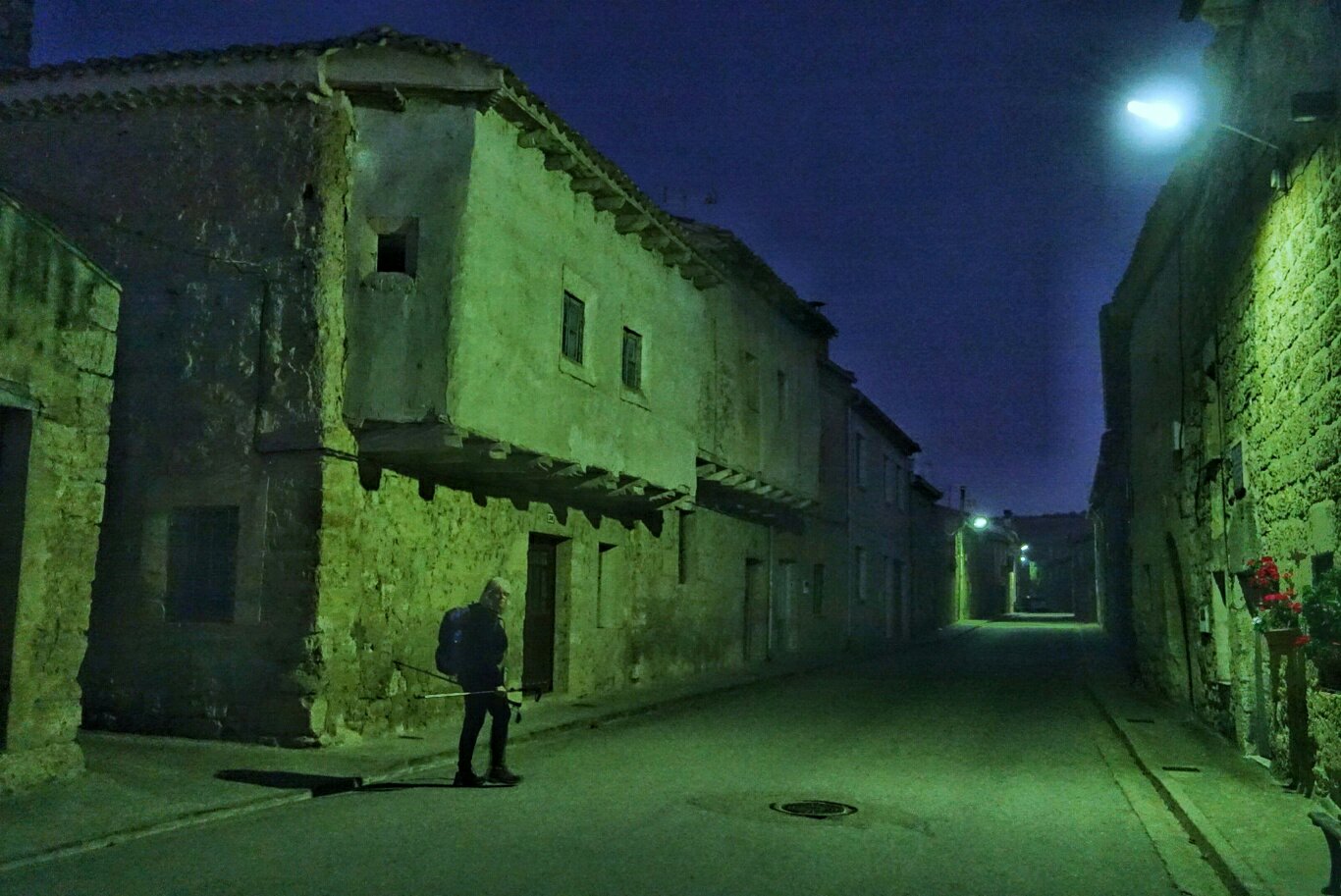 Leaving Hornillos del Camino early this morning. I met the pilgrim on the left moments after taking this photo; her name is Astrid, she has four daughters, she was born four meters below sea level, in Haarlem, she has retired from the Canadian diplomatic service, and she, by her own account, “cannot lose an argument about health care policy that is based on facts.” 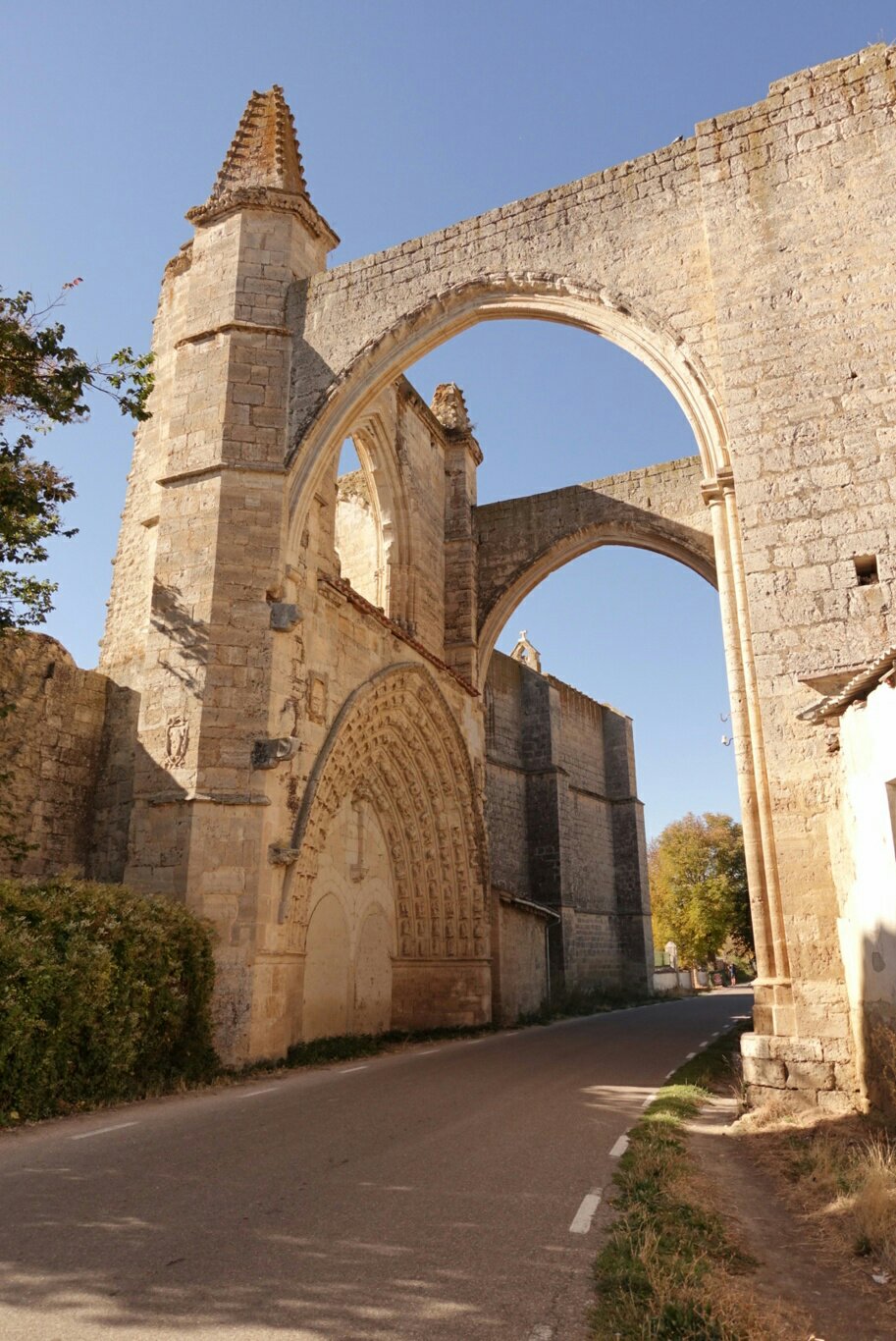 The road goes through the ruins of this 15th-century convent. Approaching Castrojeriz. That’s the hilltop castle I’m planning to visit as soon as I finish up here. 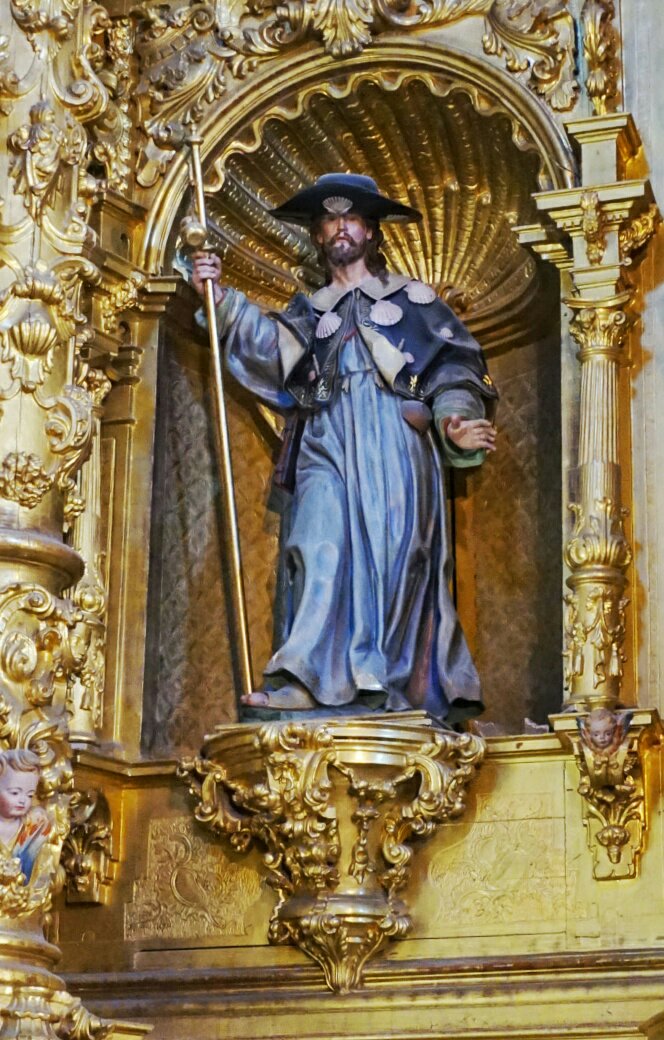 This is a different and more peaceful image of St. James than Santiago Matamoros. This shows him as Santiago Pelegrino. Note the scallop shells that decorate his robes – still a standard part of a pilgrim’s equipage.