The last two days of walking have felt long. It wouldn’t be true to say that I have gotten “used to” walking 12 or 13 miles a day, but “inured to” is close to the mark. The walk from Los Arcos to Logroño was more like 18 miles, though, and today’s walk, from Logroño to Nájera, was similar. My feet and legs start feeling like whipped dogs at about the 16-mile-mark. Poor little doggies.

I found dinner at Los Arcos at one of the two or three choices on the square, where a waiter led me downstairs into their subterranean dining area, asked “Solo?”, and then seated me without ceremony at a small table where a man had already started his meal. This man was Jan, from Stuttgart. He is trim, gray, and manages to seem clean and well-put-together even after a long day of hiking. He has a habit of boring into you with his pale blue eyes when he speaks. Imagine a combination of Stephen Maturin, Felix Unger, and, I don’t know – Vercingetorix, for the heroic German piece. Jan is the only person I’ve ever met who feels about Ulysses the way I do. He has read it once in German and twice in English, and has visited Dublin to see where the action takes place. Let me repeat the point I just made, in case, in your hurry, you didn’t appreciate it the first time: Jan has read a notoriously difficult novel in English twice, and English is not his native language. We agreed that Ulysses nearly ruined fiction for us, because everything else seems so tepid by comparison. Jan was a lucky dinner partner.

The next morning, Jan caught up to me as I was leaving Los Arcos, chatted for a few minutes, and then zoomed off down the trail. A few minutes later, we had a lovely sunrise.

I have been meeting good people lately. Matthias and Emma, youngsters from Australia, who have been traveling for four months and still have a couple of months to go, and who are managing a very tight budget and some health setbacks with real grace and humor. Tracy, from Australia, and Rita, from Switzerland, who have strong opinions about the virtues of creative school environments for young people. Carolyn, from Seattle’s Madison Park, who walked the Camino Portugues a few years ago with her father – who was 80 years old at the time!

The last few miles of the walk to Logroño were through light-industrial sprawl around the city – a hard slog for somebody who has already walked 15 miles. The ancient center of Logroño was nice, as usual, with its old, narrow streets and cathedral, but this section is small, and it is surrounded by an unremarkable modern city. According to TripAdvisor, the #1 attraction of the city is a short stretch of street in the old quarter where there is an unusually dense concentration of tapas bars. Tapas are little plates of food. That’s the best they’ve got.

I spent a rest day in Logroño, seeing such sights as there are and making a boatload of reservations for Bob’s upcoming visit. At this point, I have a flight that will take me to Barcelona at the end of October, and then he and I have transportation and places to stay for our visits to Collioure (Patrick O’Brian’s home on the coast), Carcassonne, Nimes, Arles, and Marseilles, and flights from Marseilles to Rome. The incredible thing about this, to me, is that there are still reservations to be made. Trips to Europe are more complicated than they used to be.

And today I walked to the little town of Nájera, past mile after mile of grape orchards. The newish, unremarkable part of the town is on the east side of the river, but the old part is crowded up against red sandstone cliffs that form a natural barrier on the river’s west side; it’s as though an old Spanish village had been built in a beautiful spot in the American southwest. An hour or two ago I was sitting on a bench outside some ancient cloister or grave of a 12th-century king or some damn thing when up walked Jan! He is excited to be in Rioja, where the wine is very often likely to be very good. Neither of us has any idea where we’ll be eating tonight, so I may or may not see him when it is finally late enough to go out for dinner.

I knew that much of today’s walk would be through agricultural land with no towns, so I brought some nuts and an apple with me – but it is now 6:30 in the evening and I have spent seven hours hiking today. The two pieces of toast I had for my wretched hostel breakfast and the apple and nuts on the trail have left me famished. Carolyn, the woman from Seattle, told me that she had accidentally ordered a plate of baby eels in Logroño. At the time, this sounded comically awful. But now? 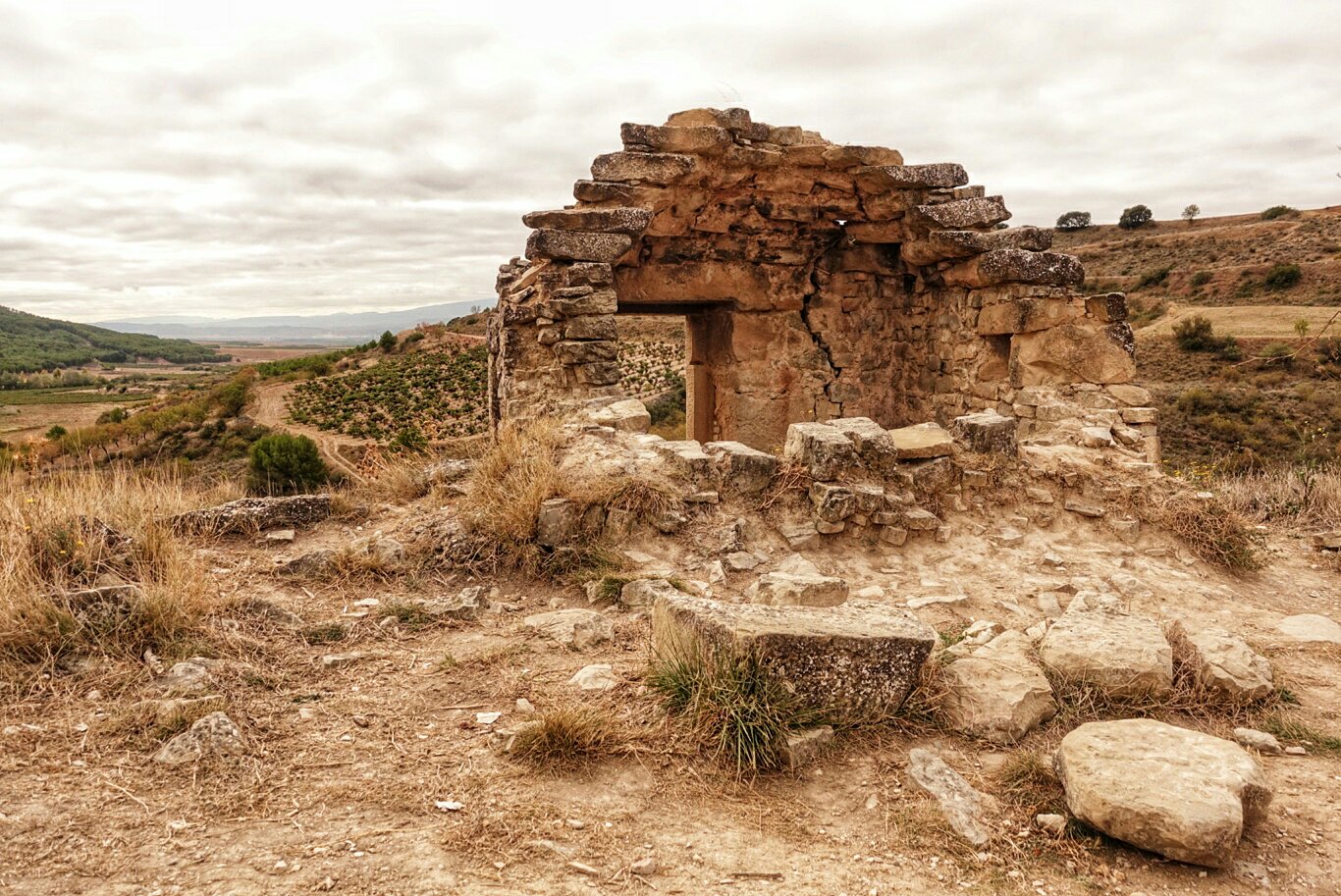 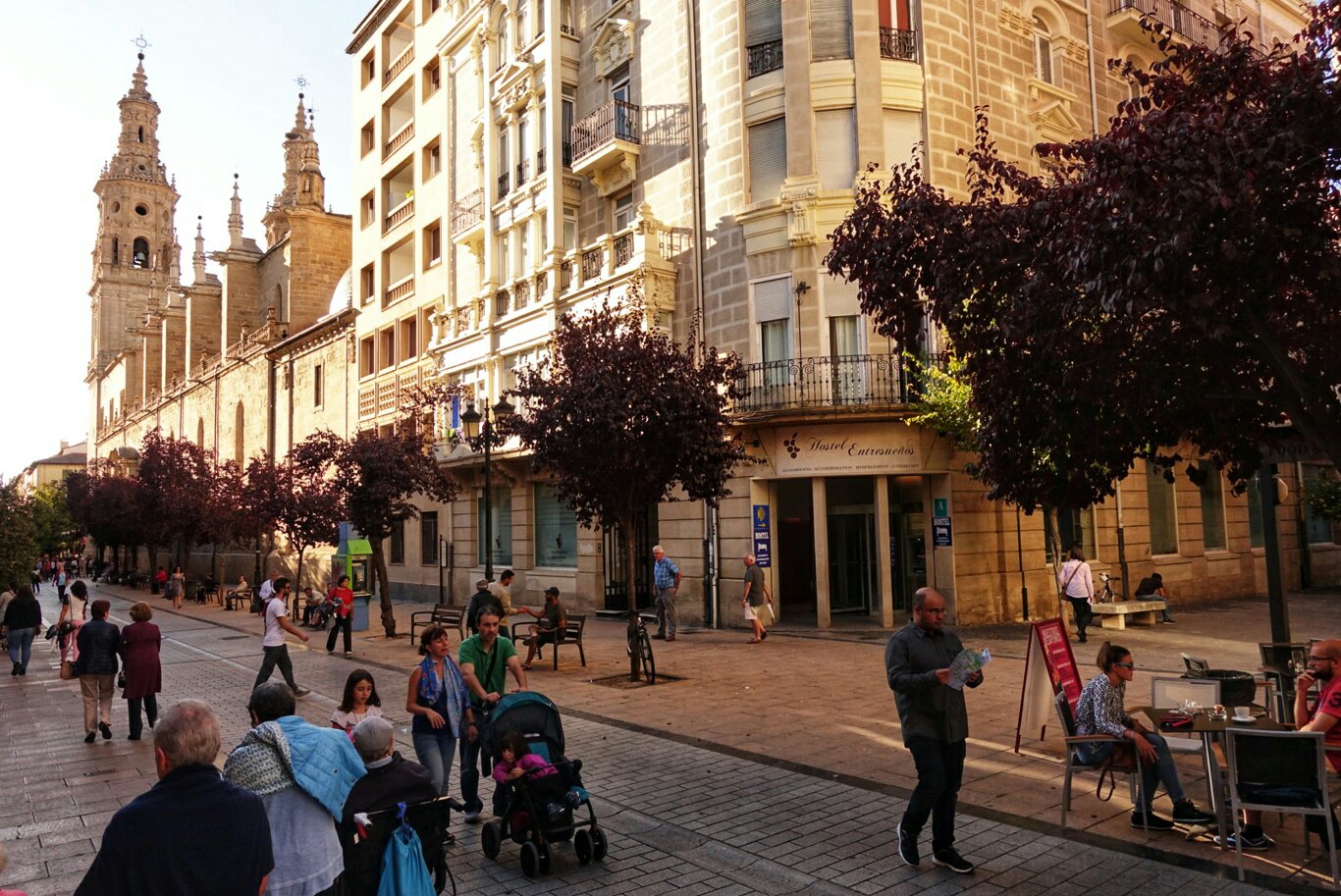 My albergue in Logroño is behind the curved doorway in the right-center of this photo. 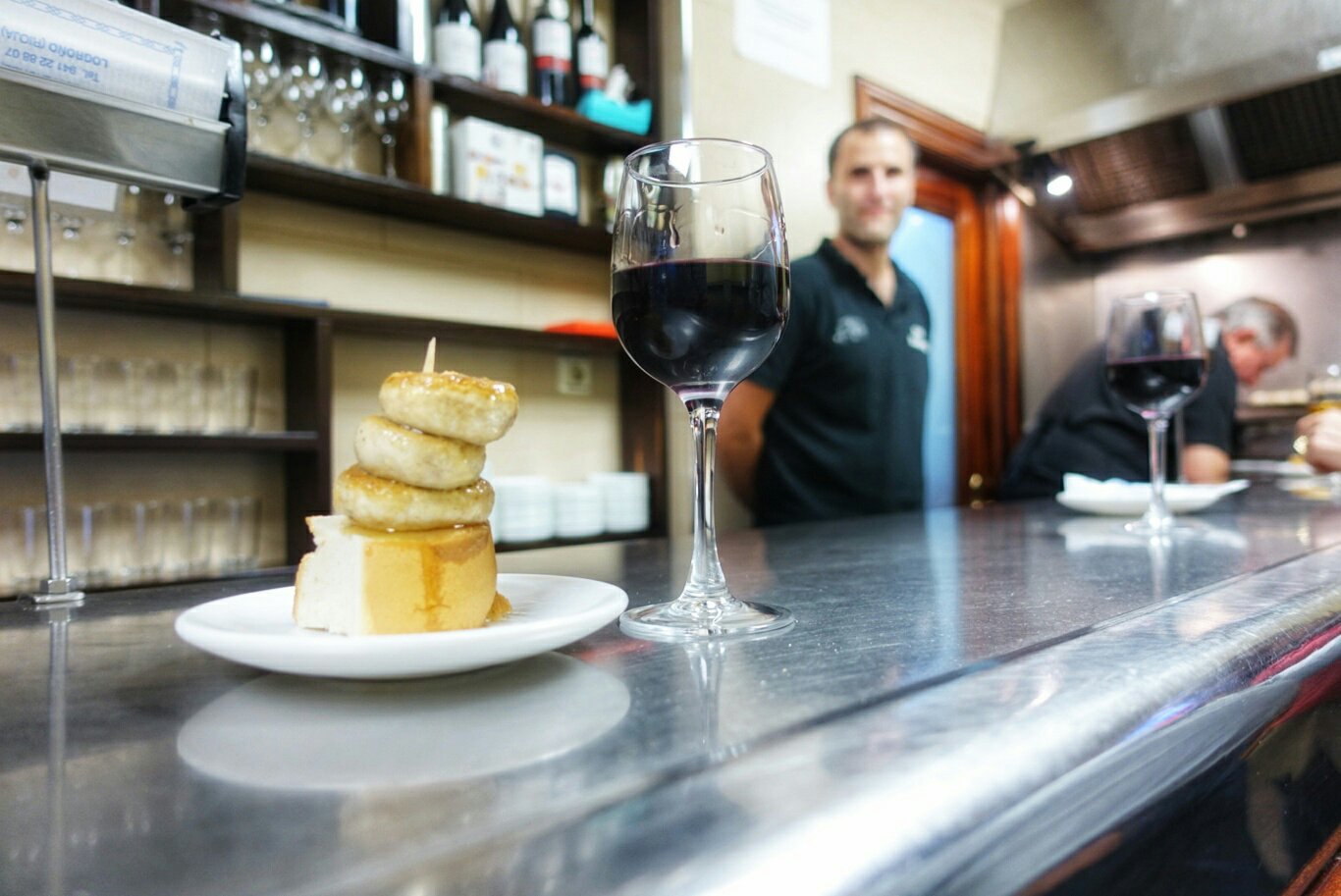 Three mushrooms that have been sauteed in olive oil and garlic, on a piece of bread, with a glass of wine. Heaven. 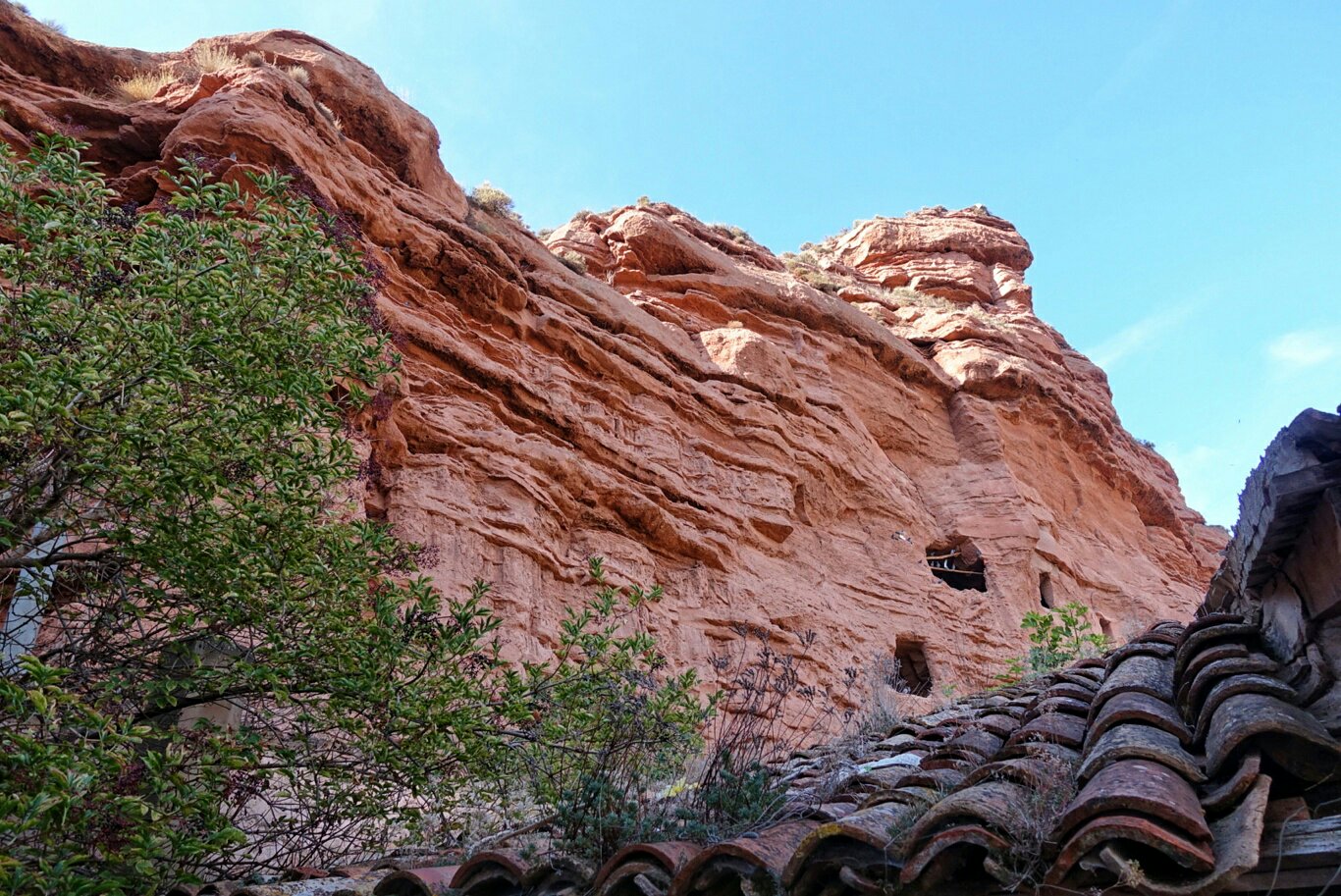 The red cliffs of Najera. 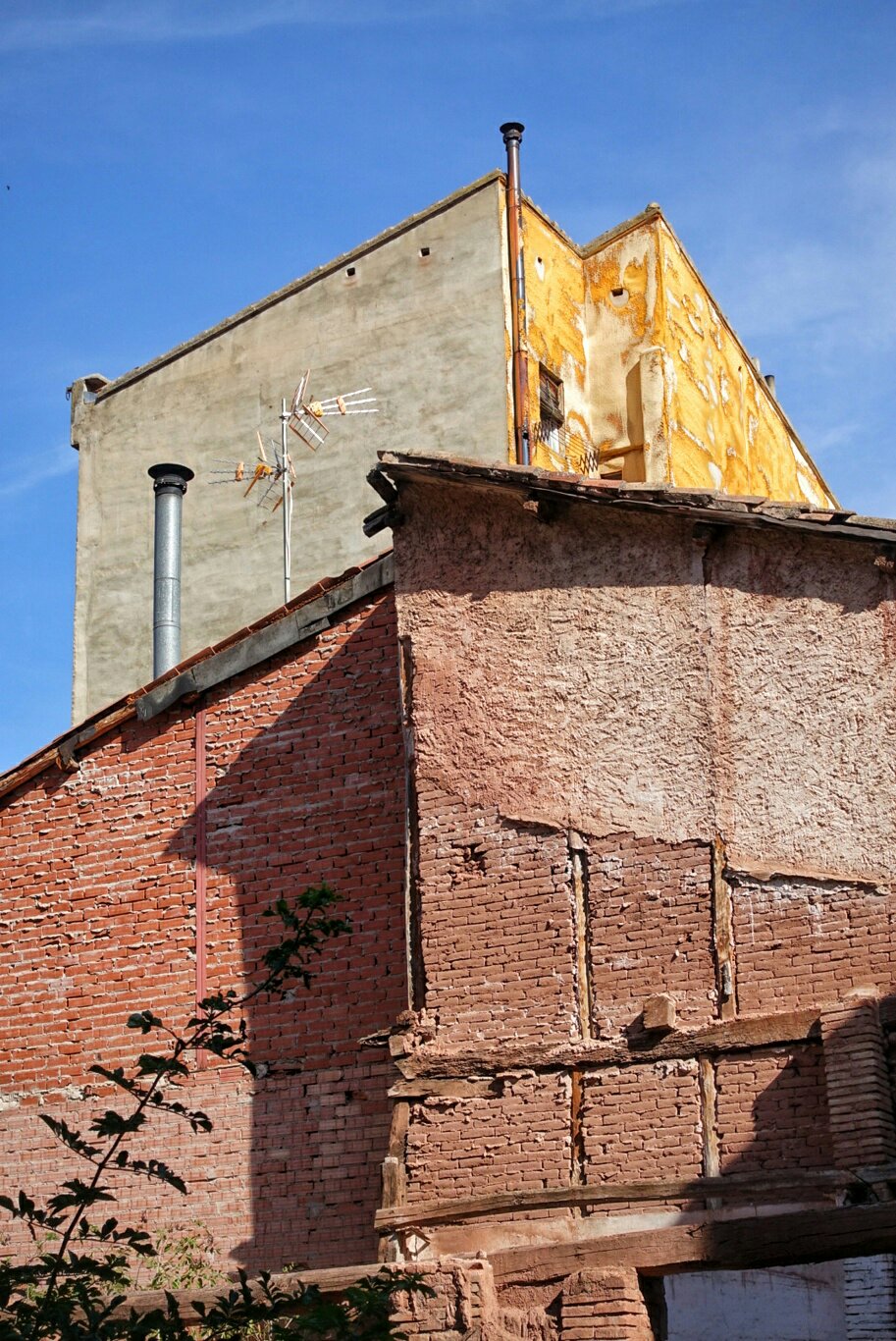 Colors and textures in Najera.