I signed up for Spanish lessons that began on Monday morning. You might think that my having spent two months studying Spanish in Guatemala during the fall of 2016 would make my first few days a matter of breezy, casual review, but you would be wrong. My reaction to each palabra is similar to the panicky feeling that I have when I am approached by a smiling person whose name I should know but do not. I have had that feeling hundreds of times since Monday morning.

I spend two hours with Manuel, who drills me on grammar, and then an hour with Jenny, who attempts to engage me in conversation while I knead my forehead with my fingertips and groan in frustration. When you include the time it takes me to walk to and from the school and the time I devote to the homework, my studies are consuming four hours of my time every day; when you factor in my psychic involvement, though – my anxious obsession – the classes are leaving me time for almost nothing else.

Manuel is 48 years old and slightly tubby. He wears glasses, a small mustache and beard, a baseball cap, and, for three days in a row, a red tee shirt with “Egypt” embroidered across the chest. A mole on his neck sprouts three luxuriant hairs. There is a scar at the nape of his neck that marks where a tumor was removed, years ago. The treatment after this procedure damaged his hearing, he tells me, although it appears to be better than mine; these treatments may also be responsible for the back of his head being nearly bald. 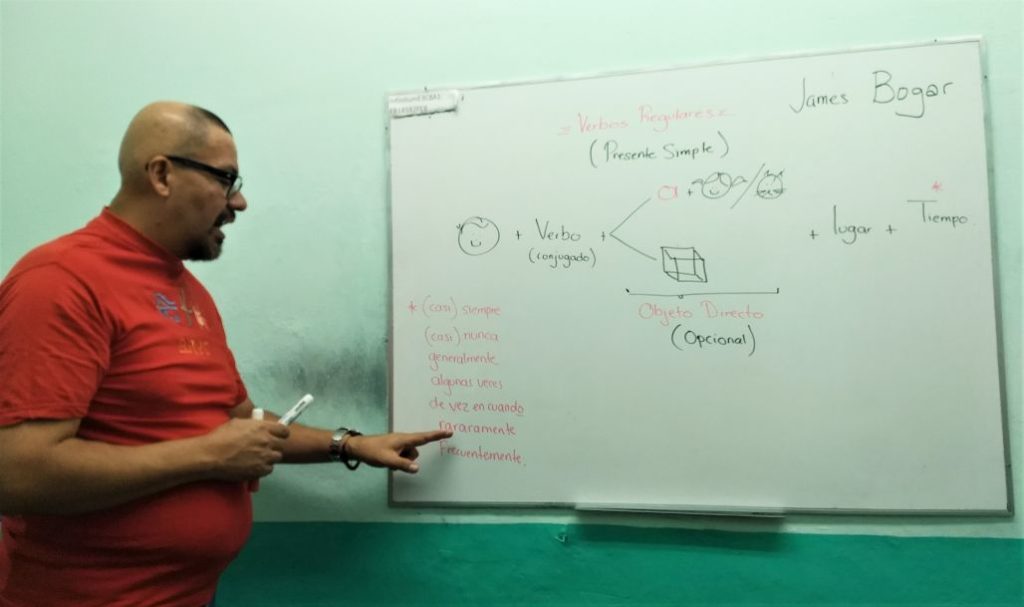 Manuel teaches me at the whiteboard. My apologies for the poor quality of this cellphone photograph, but I thought you might be curious to see him.

Within the first few minutes of class on Monday, Manuel had written “James Bogar” in one corner of the whiteboard. He glanced at the whiteboard before using my name for all of Monday’s lesson. This was true on Tuesday, too. And on Wednesday. And on Thursday. On Friday morning when I arrived at the school I saw him sitting in the open courtyard outside our classroom and chirped “Buenas días, Manuel,” as I have been told I must. “Buenas días, uhm er fruhlrmngk,” he replied.

I don’t know whether this incredible forgetfulness is an aftereffect of his surgery, but honestly I doubt it. Manuel is as relaxed a person as I have ever met. His calm makes my ongoing anxiety seem insane. I think he doesn’t remember “James Bogar” because he feels no social pressure to do so. And why should he? Manuel and I are not going to be friends. We have a purely professional relationship. Manuel is at peace with himself; he knows he is a good teacher, whether he remembers my name or not. And he is a good teacher, absolutely. I like knowing that he doesn’t feel obliged to care about me as a person. I remember having this reaction to my first college classes; it was fantastic that in those enormous classrooms I was able to care about the subject without having to worry at all about the teacher’s feelings.

Jenny takes over for Manuel every morning at 11:00. She is energetic, tiny, and perhaps 30 years old. Her dark hair is parted on one side and pulled back in a ponytail. She is intelligent and her English is idiomatic; she spent several months in California some time ago, where she eagerly learned such preposterous phrases as “the whole enchilada,” and “holy guacamole.” Jenny has heard of Steven Pinker and Oliver Sacks and James Joyce, to my surprise; she says that a trip to Liverpool is on her bucket list, because she adores The Beatles. She pulls out her phone whenever she needs to illustrate an anecdote; she showed me photos from a Oaxacan hailstorm two years ago that was “apocalíptico”; hail the size of tennis balls smashed windows and dented cars. Jenny, like Manuel, insists that she and I begin each lesson with the “Buenas días cómo estás muy bien y tu también gracias” routine. “Perfecto,” she said, when I asked how her previous afternoon had gone, and then talked about how the weather was neither too hot nor too cold.

I don’t get it. What is it about this “Buenas días” thing that Manuel and Jenny find so important? 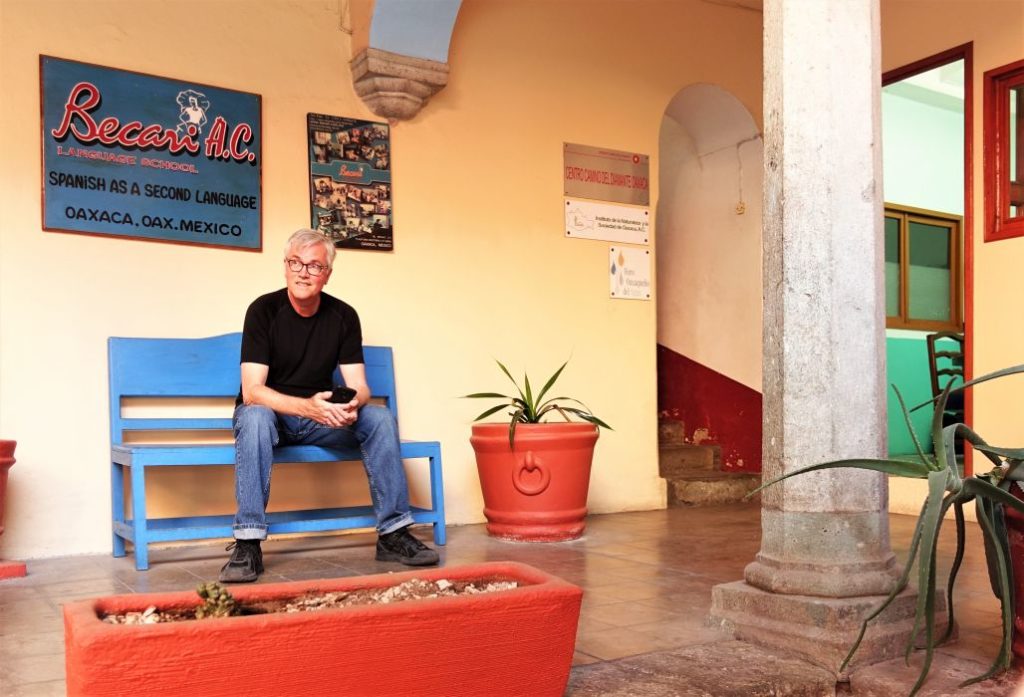 Outside my classroom at the Becari language school. Manuel walked up as I was taking this photograph; I was engaged in the “Buenas dias” ritual with him when the shutter opened.

I had a paper route in Idaho Falls when I was 12 years old. Every afternoon I would ride my bicycle to a small grocery store at the southern fringe of the downtown area and wait for the bundle of Post Registers to be dropped off. While I waited, I chatted with the guy behind the cash register. The store was usually empty; he had plenty of time on his hands. “Hey, it’s the caramel kid,” he would say, identifying me by my most frequent purchase. And then he would put his elbows on the counter and smile at me. He always let a beat go by before asking, “How’s it going?”

Even at 12, I knew that the proper response to “how’s it going?” is the English equivalent of “perfecto,” but I just couldn’t bring myself to utter something so banal. That’s why the guy at the cash register always made himself comfortable before asking me that question. He knew he was in for a story. “Pretty good,” I’d say, “but the chain keeps coming off my bike, and I didn’t turn in my math homework on time, but that’s okay because I think I’ll be all right for the test on Friday, and I’m behind on collecting for my route, but I think I can get caught up on the weekend, because…” and so on. Many kind adults used to amuse themselves by starting me up like this. I was the kid who didn’t understand the rules of polite conversation, and now I’m the adult with the same problem.

“Cómo estás?” How much time do you have?

When I came back from Easter mass, and my neighbor asked me how my morning was going, I said it was fine. But it wasn’t fine at all. What was the right thing to have done in that situation? Should I have told her about my bicycle chain and Ecclesiastical Latin, or was “fine” the correct response? I honestly have no idea.

More photographs of Santo Domingo and Oaxaca from the last week

Postscript: A friend points out that I misspelled the two-word title of this post. It is tempting to silently correct the error, but that would be cowardly. It is also tempting to protest that I carefully inscribed this error in my notebook, on my first day of classes, and that I have been diligently reinforcing it in my mind ever since – but this careful dedication to my stupidity only makes it worse. I leave the post unchanged, note here in this postscript that I now know it is “buenos días,” and apologize.