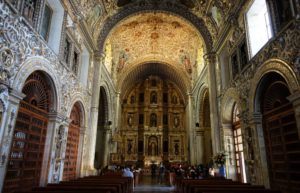 The splendid interior of the Templo de Santo Domingo.

I arrived at the Templo de Santo Domingo de Guzman, wearing a button-down shirt and a neutral facial expression, and settled down in a pew to wait for Easter services to begin. By 11:00 it had dawned on me that something was wrong; the only people coming into the church were occasional solitary explorers and obedient tour groups. I couldn’t be confused about the day of the week, could I? Surely I couldn’t be as confused as that. Surely not.

On the following morning at 11:00 I arrived at the Templo de Santo Domingo de Guzman, wearing a button-down shirt and a neutral facial expression, and discovered that Easter mass was already underway. I stood in the back, so that I wouldn’t have to get up and down with the congregants, or, worse yet, use the kneeler when everyone else did. The priest was delivering a sermon, judging by his vocal cadences. I wouldn’t have understood him even if he had been speaking English; the echoing space obliterated the differences between vowels, consonants, and the pauses between words. After a while, a young woman addressed the crowd. Then the priest took over again, using that vocal style that is neither singing nor speech – or maybe it’s just very poor singing. It’s hard to be sure. There was some holy-water sprinkling. And then there was more sermonizing, which I took to be jocular, this time, judging by the priest’s energetic arm movements.

The people in the pews seemed to be dressed exactly as they might have been for a trip to the market. Short-sleeved shirts, sometimes bare shoulders for the women, no bonnets in sight. I watched as a woman standing nearby scanned the crowd to see how other people were dressed; she made a quick assessment and then pulled the hat from her head and tucked it under one arm. A young woman in a tank top was wearing complicated bracelets on both wrists that tangled together when she put her hands behind her back; she faced away from her companion while he painstakingly released her from her bangles. Mothers fanned themselves and their babies. People in the back took pictures with their cell phones.

Then there was a stir in the congregation, and, to my horror, I realized that everyone was about to shake everyone else’s hand. I keep forgetting that this has become the custom, despite being forcefully reminded of it every few years. I’ll never forget the look of distaste on the face of the woman who found herself compelled to shake my hand when I attended mass at a little town outside Burgos on the Camino de Santiago; her cold look said that she felt that I was an outsider and that I had no business being there, in the role of a bemused observer of her deeply held convictions, and she was absolutely correct. I kept my hands clenched behind my back and my eyes on the altar as the activity bubbled around me, and then, when the mass started again, I left. I’d hoped to stay for communion, but I was feeling so thoroughly an extranjero that I didn’t want to linger. 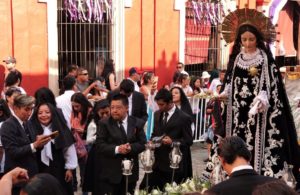 The Procesión del Silencio gets underway on Good Friday.

When I was a child, my mother used to take me and a few of my older sisters and brothers to mass. We would stand in the back, even when there was space in the pews, and even when the ushers were quietly insistent about our taking a seat. The moment the ceremony came to an end, we would rush out of the church and find our station wagon at the edge of the parking lot. Because this was what we always did, it felt normal; it didn’t cross my mind to wonder why the other people were sitting down and we weren’t, or why we usually arrived just as mass was due to begin, or why we always left as the closing words of the service were still echoing off the walls. I didn’t wonder about any of this until I was an adolescent, when I realized that my mother was afraid. I used to say she was agoraphobic, but now that term seems unnecessarily clinical, and to carry an air of diagnostic certitude that it doesn’t deserve. The word “afraid” is all that is required.

I wasn’t afraid of too many things when I was six years old, but that has changed. I’m afraid of the distance that seems to separate me from the people at Easter mass, and maybe even more afraid of the distance between me and my own childhood. I disapprove of casual dress at church and what it implies about disregard. I am deflated by any mass that is not in Ecclesiastical Latin; I remember it with fond reverence, even though the Church abandoned that ancient tradition in 1962. I feel sorrow at the absence of a censer swinging smokily down the center aisle. I don’t want to shake a stranger’s hand. I’m afraid of people. I left the Templo de Santo Domingo de Guzman feeling as though I was not quite a member of the human race. As I stepped out into the sun, a young woman approached the church doors wearing a wisp of rayon that, in any other context, I’d have said was an article of lingerie.

I know that this sentimentality is absurd, and that the world of my childhood has changed in far more important ways than the trappings of the Catholic mass. I was hoping for a colorful show of quaint customs on Easter morning and got upset when people behaved like casual inhabitants of their own culture instead of like tourist attractions. I was hoping that the differences between me and the people in that church would be so profound that I could observe the mass safely, from high in my aerie – but instead I see that the problem is not that I and the Oaxacans inhabit different worlds so much as that I will not or cannot comfortably inhabit my own.

When I got back to my apartment, my neighbor Michelle was out on her little porch, watering the plants and sweeping up. “How is your morning going?” she asked. “Fine!” I replied. It didn’t even occur to me to tell her the truth.

More photographs of Santo Domingo and Oaxaca from the last week