Ponferrada is famous for its twelfth-century Templar castle. The remains are largely intact and are stupefyingly vast; the idea that an enemy might ever have had the temerity to attack this place seemed ridiculous. An information placard, with a helpful English-language translation, said something like, “Between the 10th and the 15th centuries, castles like this were like the nuclear bombs of today. They were an excellent dissuasion.” I rolled that word around in my head for a while. “Dissuasion.” Is this an artifact of the translator having had recourse to a thesaurus, or is there a common Spanish word like “dissuasion” that made including it in the English translation seem natural?

The invention that brought an end to castles is the same thing that brought an end to the knight-errancy that Don Quixote loved: gunpowder. Cervantes has Don Quixote complain about how a bullet could go through his temple during a battle before he’d had the chance to display any courage at all. The technology that they used before gunpowder is still on display inside the castle; there is a heap of round rocks, each slightly larger than a bowling ball, near one of the walkways, and, under a nearby roof, a catapult, loaded and bent back by a rope, ready to go.

After touring the castle and buying the menú del dia at an ordinary restaurant in the square under the church, I returned to my sterile and unremarkable albergue at the edge of the medieval quarter.

The next morning, the pilgrims were abuzz. Had I been outside? How dangerous is it? Will it get worse? Should we simply take buses to Sarria? I spent some time that morning readying my most recent blog post, so I was slower than usual getting out of the albergue. A conversation with a young man at about 9:00 in the morning made me realize that the situation was interestingly serious. “Haven’t you noticed?” he asked. “It is 9 o’clock. The sun should have come up half an hour ago.”

Smoke from nearby wildfires had prevented the sunrise.

There was nothing to do but put on my pack, start walking, and see how it was out there. Ash fell onto my clothing and irritated my eyes. Most of the pilgrims who hadn’t used transportation to jump forward beyond the smoke were wearing dust masks or bandanas tied around their faces. I wasn’t very alarmed, though. The forecast was calling for rain, and the smoke, while undeniable, didn’t seem to be getting in the way of breathing. I walked for a while with a Chinese woman who was dismissive of the worries we’d been hearing. “Haven’t these people ever been to Beijing?!?” she asked.

My destination was a little town named Villafranca del Bierzo. It was barely visible in the murk as I descended the hill into town.

I chose an albergue based on its architectural façade, a strategy that often works, but which wasn’t very successful in Villafranca. The charming exterior of the building hid an grim and institutional interior, characterized by linoleum, generations of thick brown paint on every wooden surface, warning signs on every wall, and the smell of bleach. It was the kind of place where Jack Nicholson might be taken for a lobotomy. The crabby woman at Recepción pointed out places of interest as she led me up the stairs to my room. “La cocina,” she said, gesturing at the kitchen. “Okay,” I said. “La cocina,” she snarled, pointing at the kitchen again.* I had only two roommates: a chubby young man from eastern Europe who seemed never to put on a pair of pants, and a French guy who hissed and grimaced as he palpated his blisters.

I had dinner that night with the two men who have dubbed me Jimmy Stewart; these guys have been on exactly my schedule for a few days. We were joined by a young woman from Oxford who, as it turned out, was a big fan of Philip Pullman, and was excited by the news that the His Dark Materials trilogy was about to produce a fourth book – a mathematical peculiarity, but something to look forward to, nevertheless. She and I bonded over our fondness for the British sit-com, “Peep Show,” while one of the Canadians declared his allegiance to “Two and a Half Men.”

On the following morning, well before dawn, the French guy waddled to the window, opened the shutter, and said, “Écouter.” Rain was drumming on the roof outside. This was the first rain I’d experienced since leaving Bayonne, a month and 400 miles ago.

I had a spectacular walk out of Villafranca, up through bracken and oak, on an alternative scenic trail that I had completely to myself, along a ridge as the rain slackened and the clouds, suddenly calmer, poured placidly over low passes, and then down through miles of chestnut orchards, kicking the burrs in front of me as I walked. This route gained 1000 feet that the walkers who were down below didn’t have to face, but they were walking along a busy highway, and I was alone and surrounded by beauty and quiet. The smoke had been washed from the air and, as it turned out, the rain had extinguished the fires.

By midafternoon, I was climbing through hillsides that could almost have been in England’s Lake District. Villages full of slate-roofed houses, forests that are beginning to show fall color, and pasturage, high on the hills, each field neatly framed by an old stone wall. The views got better and better, the higher I climbed. I crossed the border into Galicia at 4:30 in the afternoon.

About 30 feet ahead of me, a Japanese woman uncorked a fart that sounded like a trumpet from Mordor – a high, dying wail, promising no pity and no remorse, heralding the death of all hope and culture and morality, a clarion of futility and despair. She stopped a few feet later and turned to me with a kind smile. “Buen Camino!” she said.

A few minutes later I was at O’Cebreiro, a tiny village at the crest of the ridge that was my destination for the day. I spent the night at O’Cebreiro’s municipal albergue, one of Galicia’s chain of government-inspired albergues which my guidebook characterizes as “one of the better examples of a rather uninspiring uniform design.” I wasn’t sure what that description meant until I carried my pack into a room that seemed to have been filled with long ranks of veal-fattening pens. This place didn’t even provide doors on the shower stalls. I may stay in a Galician municipal albergue again, but, whenever there is an alternative, I’ll take it.

Today was a very easy day – only 20 kilometers, mostly downhill, to yet another charming village of stone, slate, chestnut, and cow manure. I’m back on Brierly’s schedule, I’m sorry to say; if I had walked for another few hours today, I’d have been so close to the next big town, Sarria, that tomorrow’s walk would have been over by 10 in the morning.

Brierly divides the walk between this village, Triacastella, and Santiago de Compostela into six stages. Six days of walking. I expect to go a few days further, to Finisterre, but it remains the case that I am much closer to the end of this walk than I am to its beginning. I am not ready for this to be over.

* She had heard my “okay” as “Oh – que?” and was aghast at the stupidity of an American who had never seen a kitchen before. 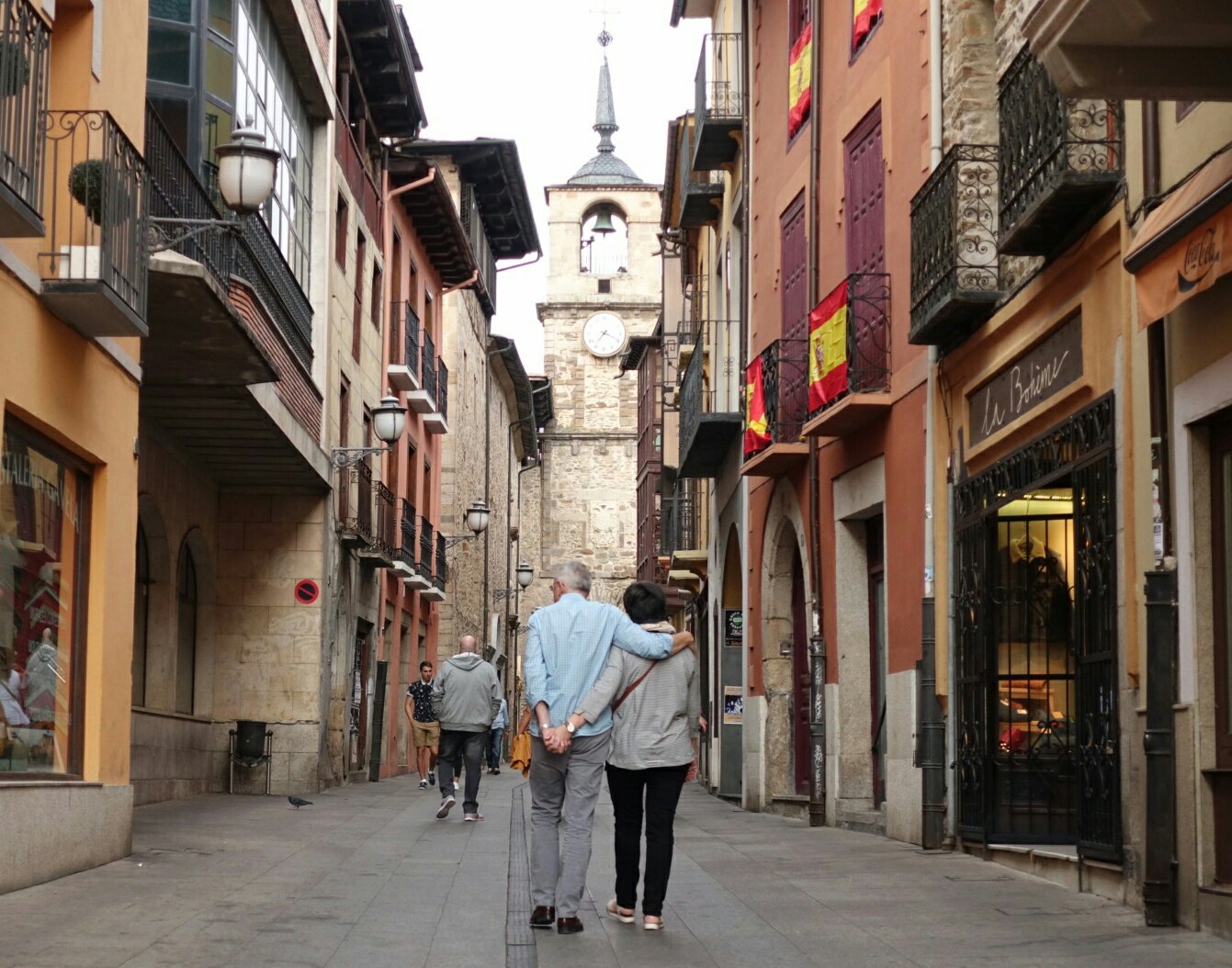 An older couple enjoys the evening in Ponferrada. 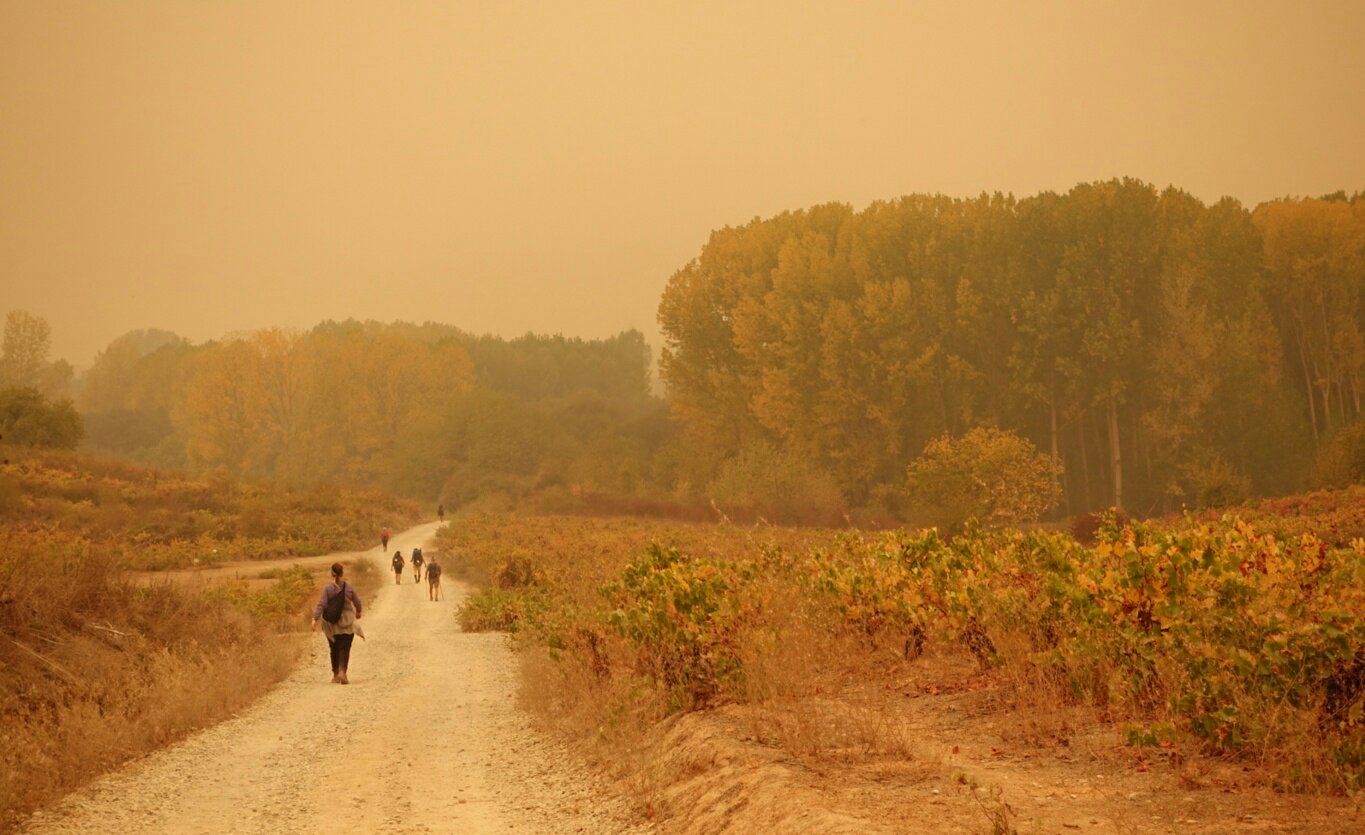 The Camino, pilgrims, grapes, poplars, and smoke. I have not played with the color balance in any of the upcoming photos. 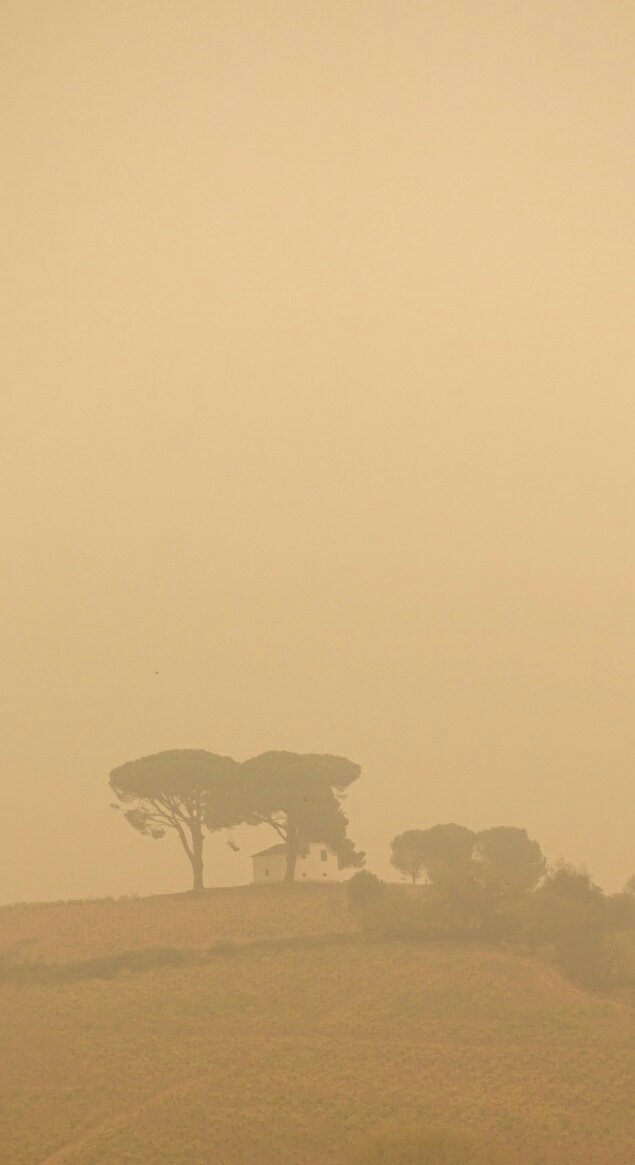 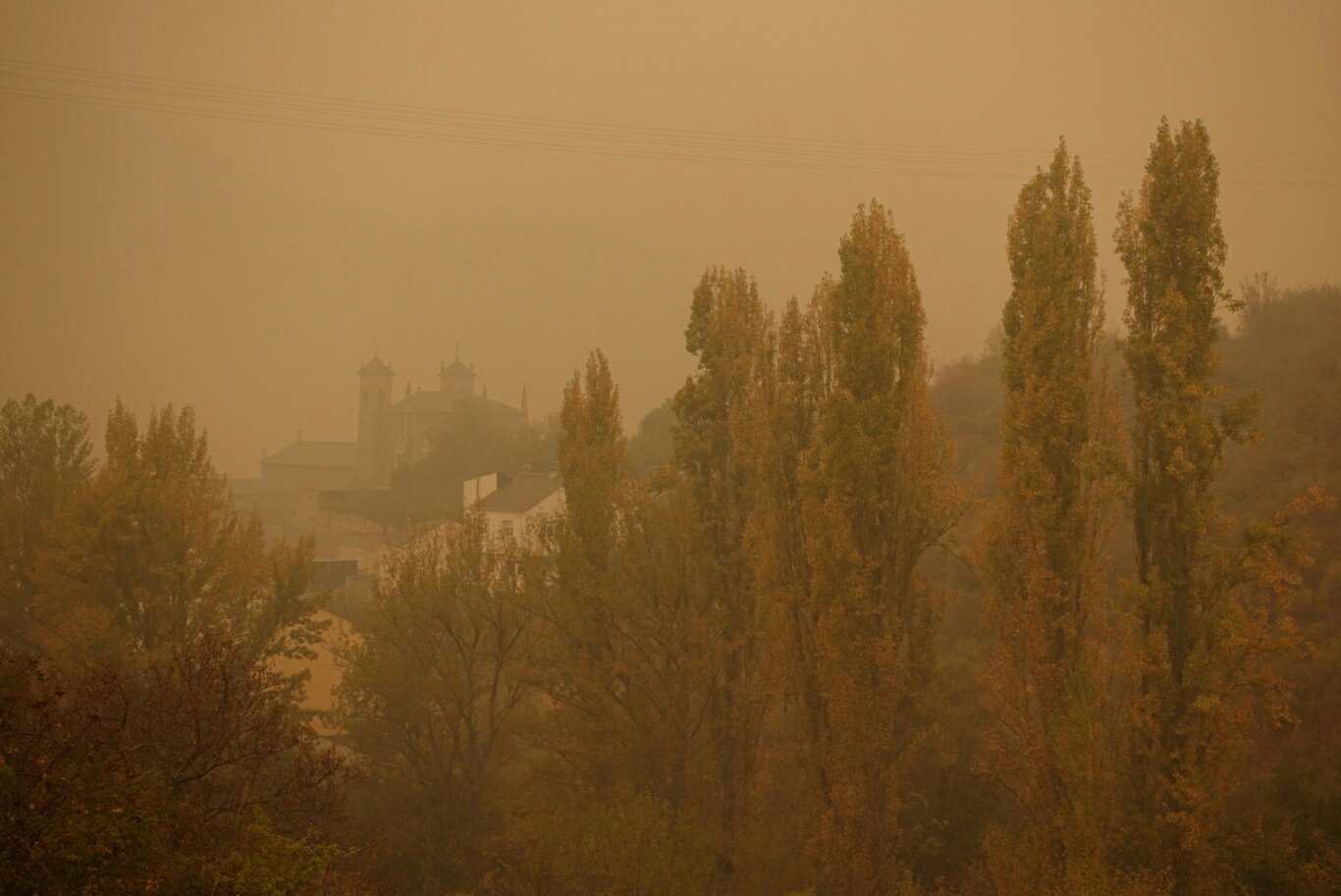 The church at Villafranca del Bierzo, and smoke. 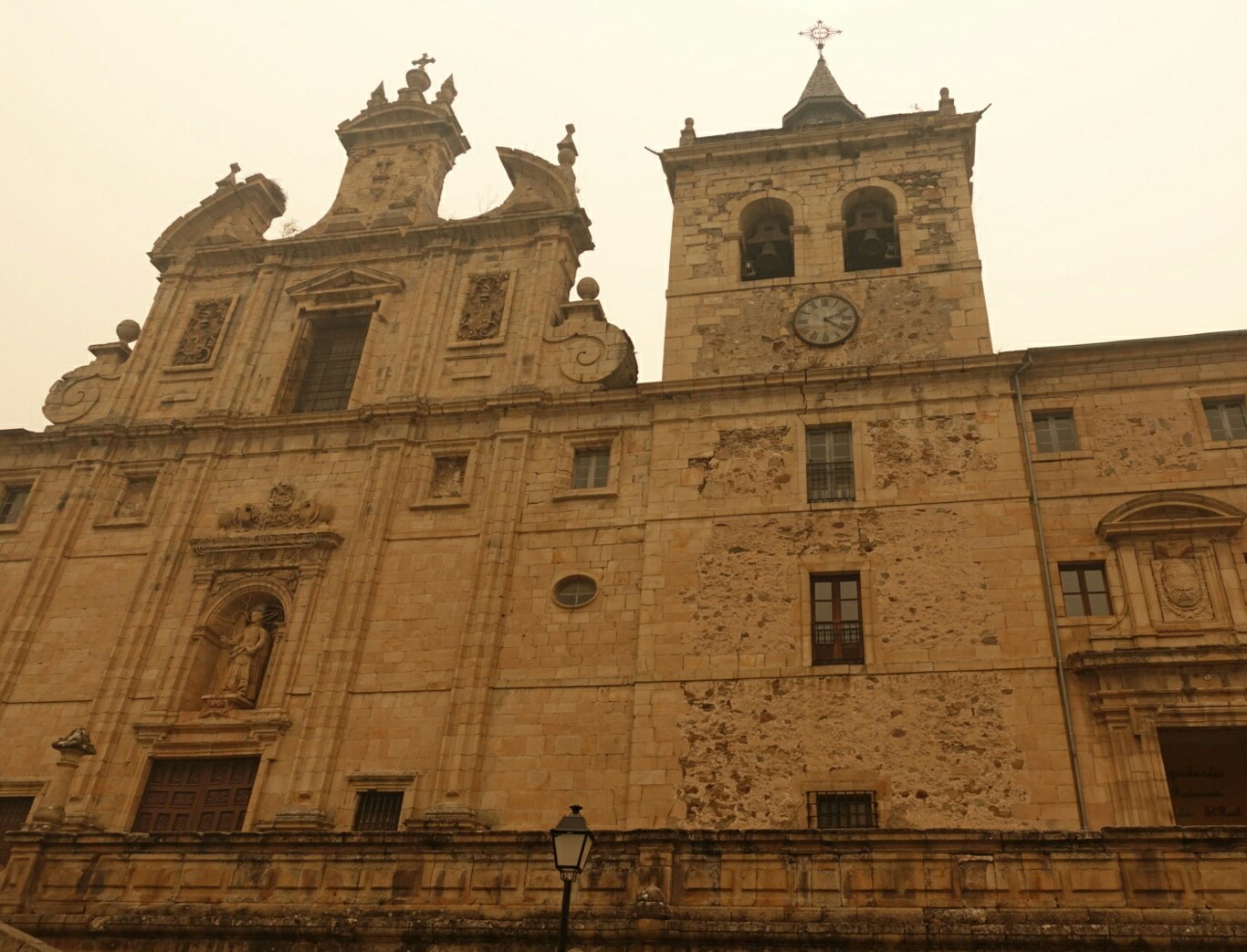 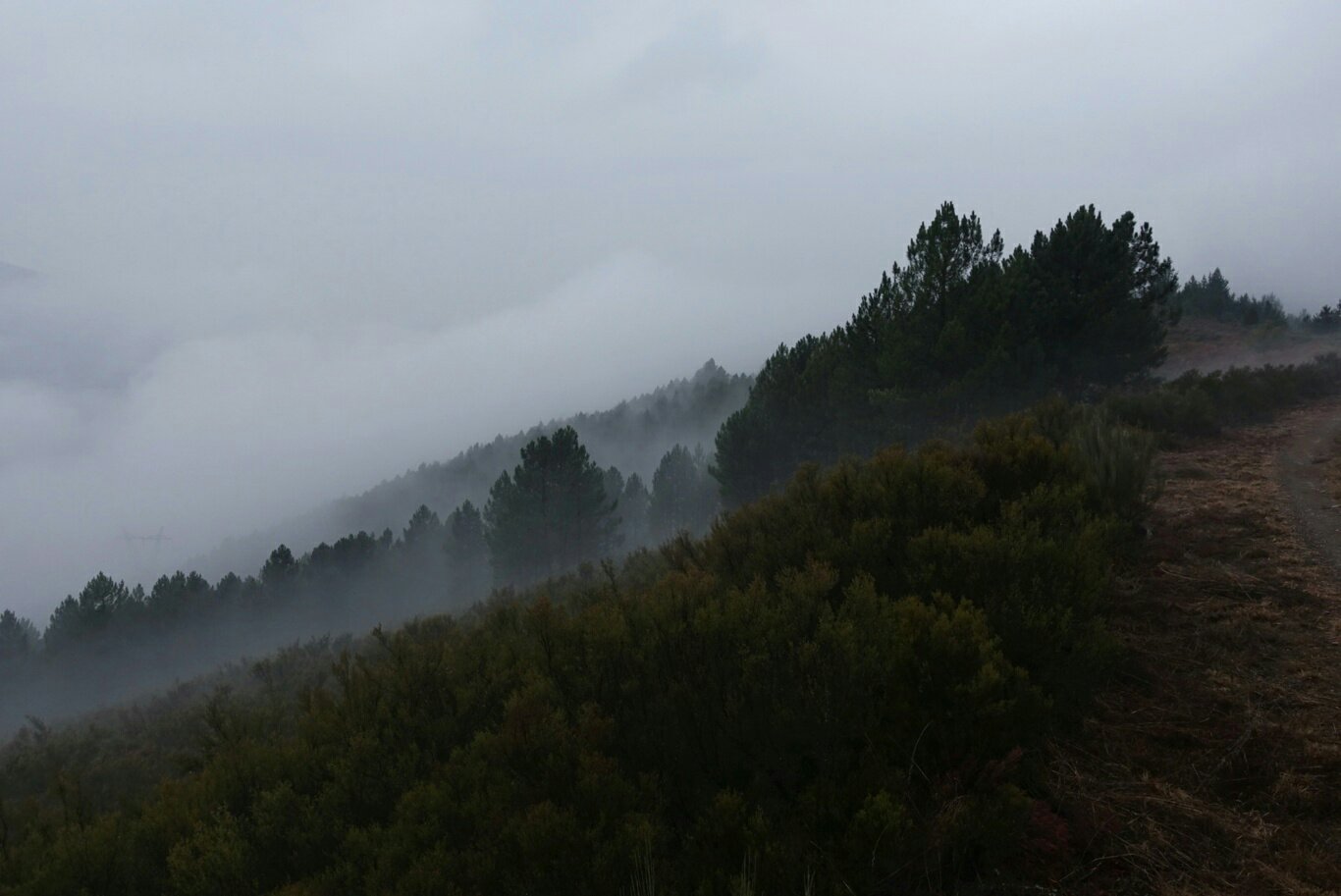 The rain clears along the ridge as I leave Villafranca. 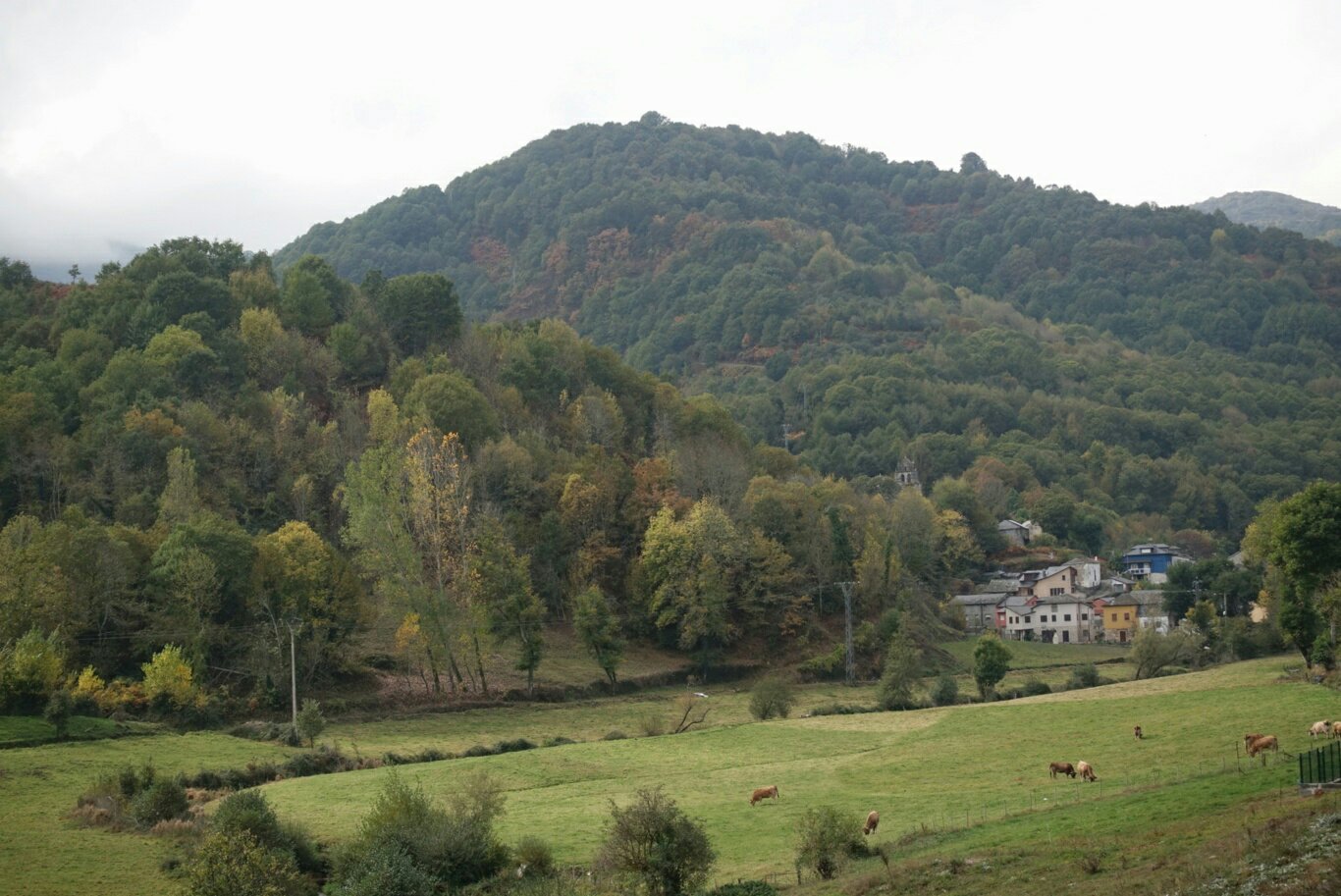 The first of what I’m sure will be too many pictures of cute little villages in northwestern Spain. 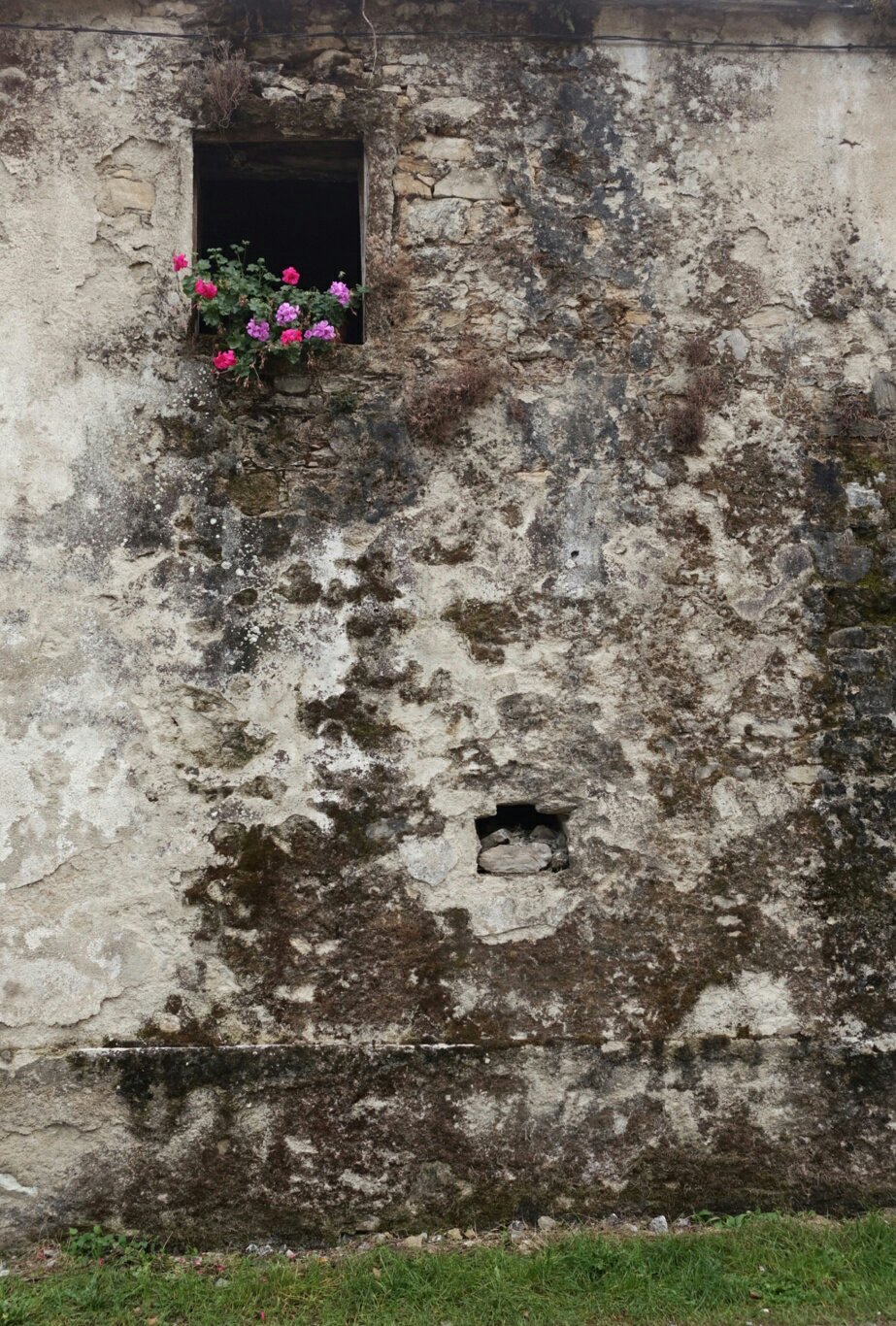 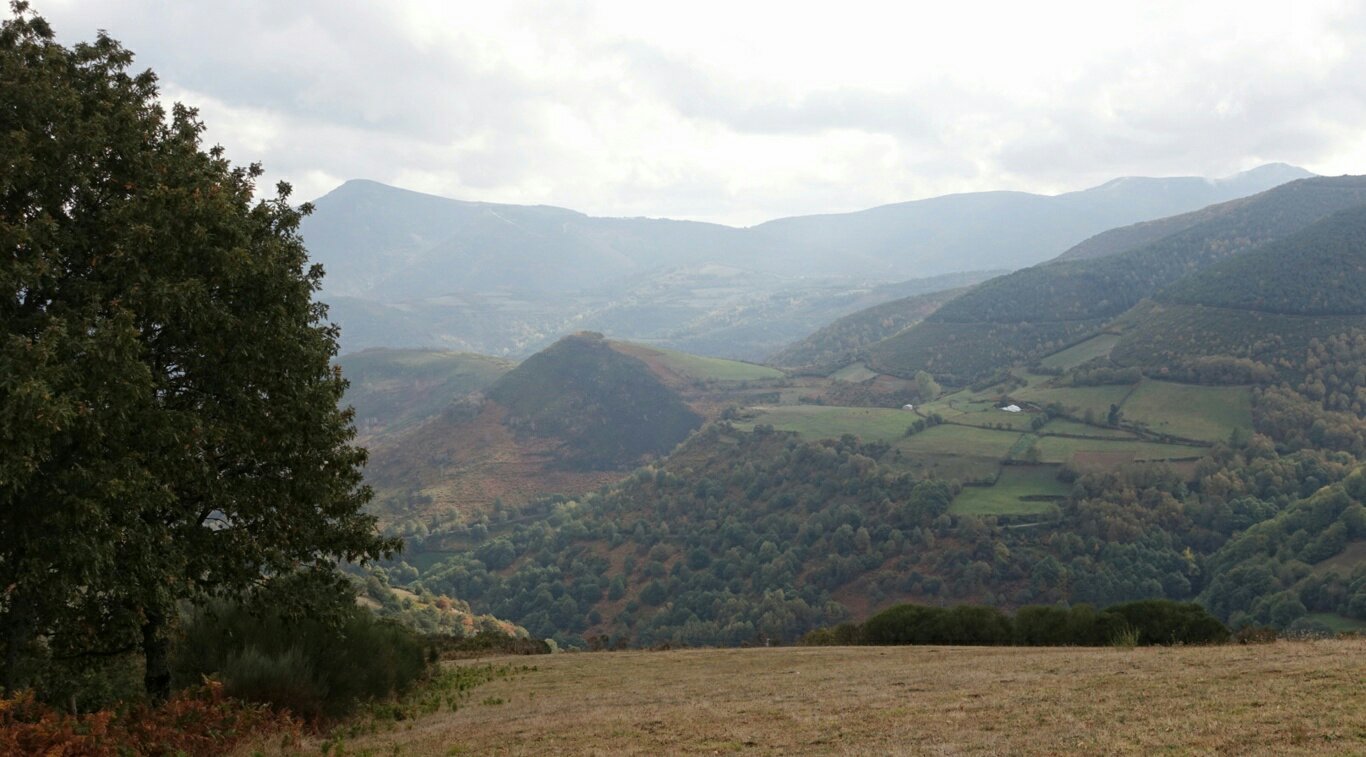 Looking back into the valleys out of which I had just climbed. 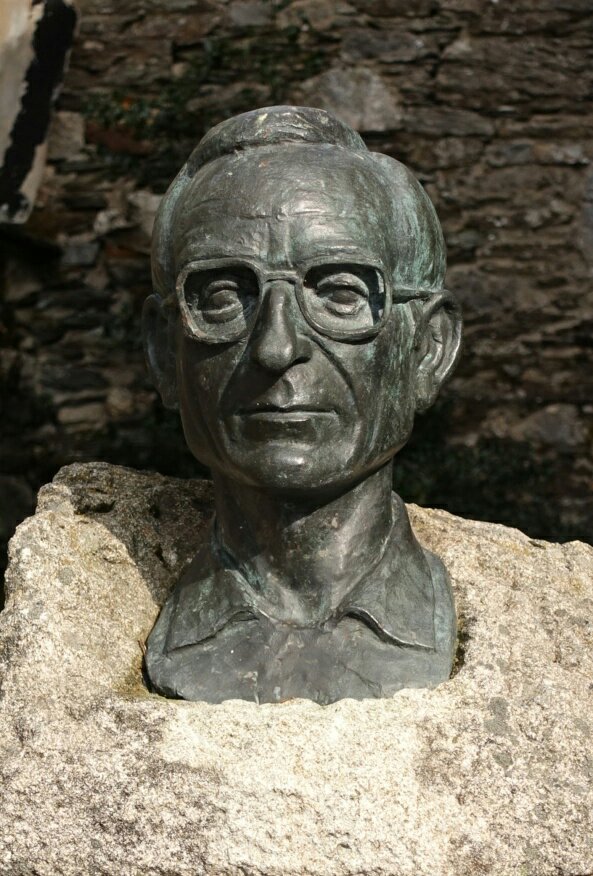 A bust in O’Cebreiro of Don Elias Valiña Sampedro (1929-1989), the parish priest whose efforts revitalized the idea of walking the Camino de Santiago. 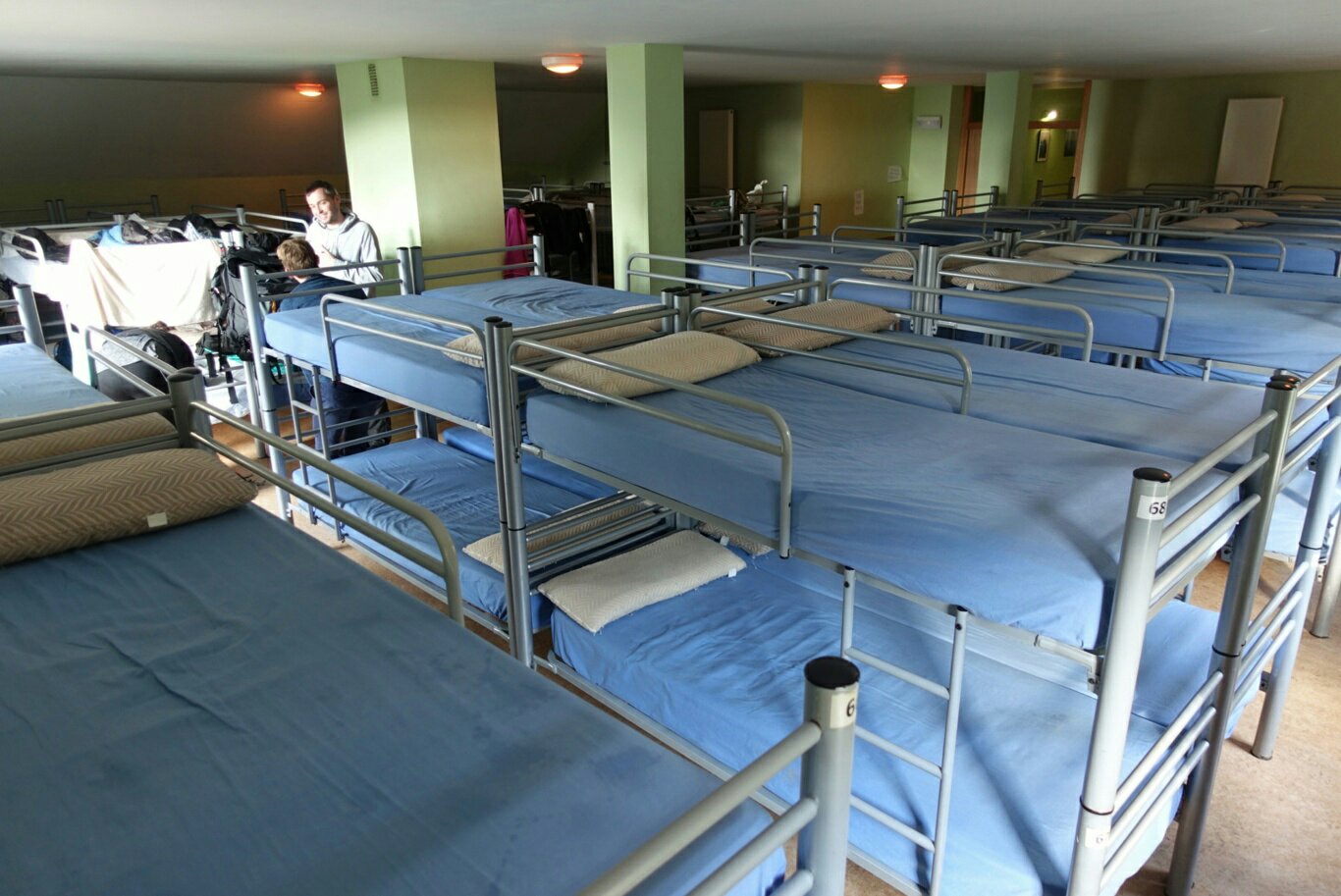 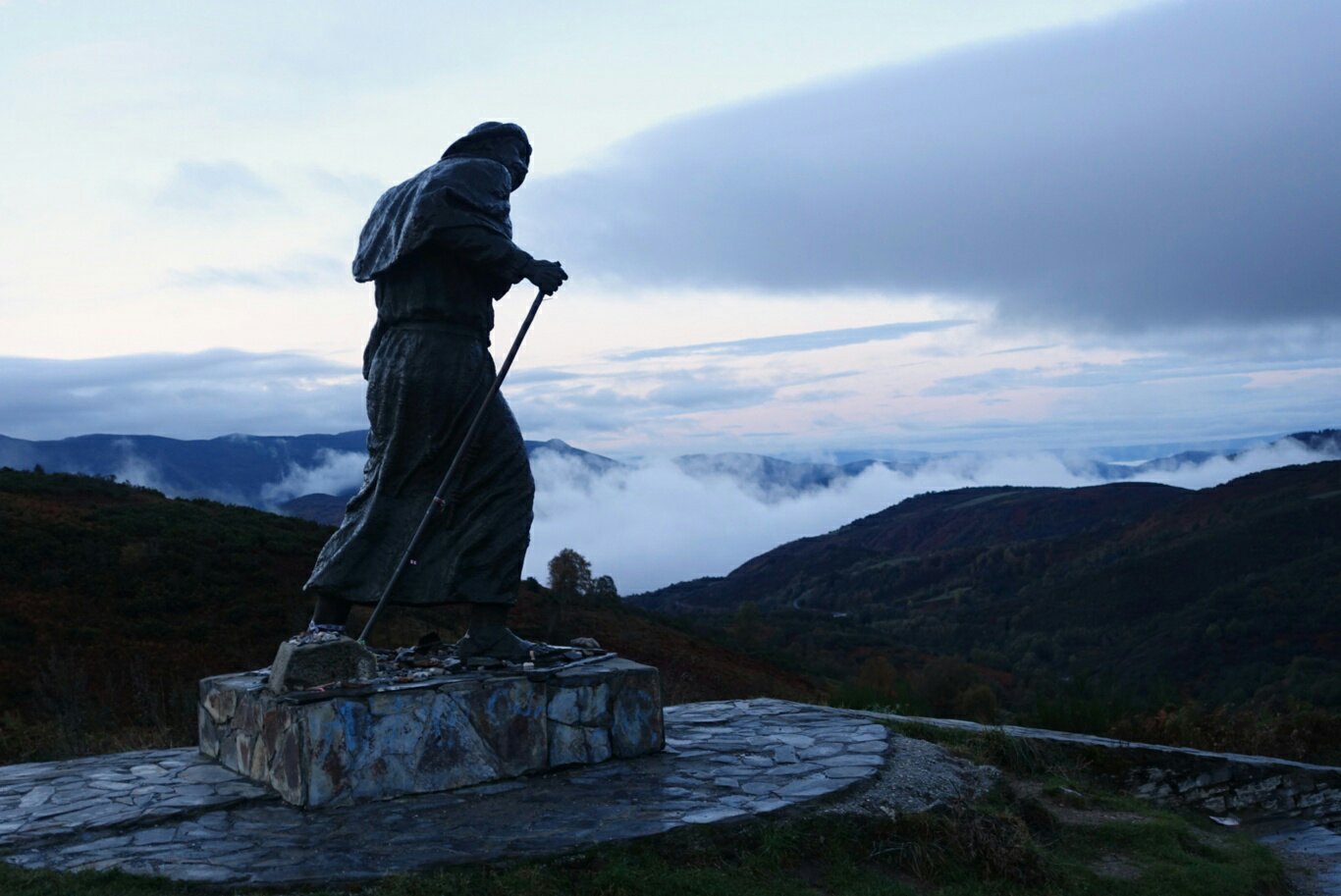 A statue of a pilgrim struggles with the wind at a high point on the trail. You can’t see them in this photo, but someone has applied Bandaids to his toes. 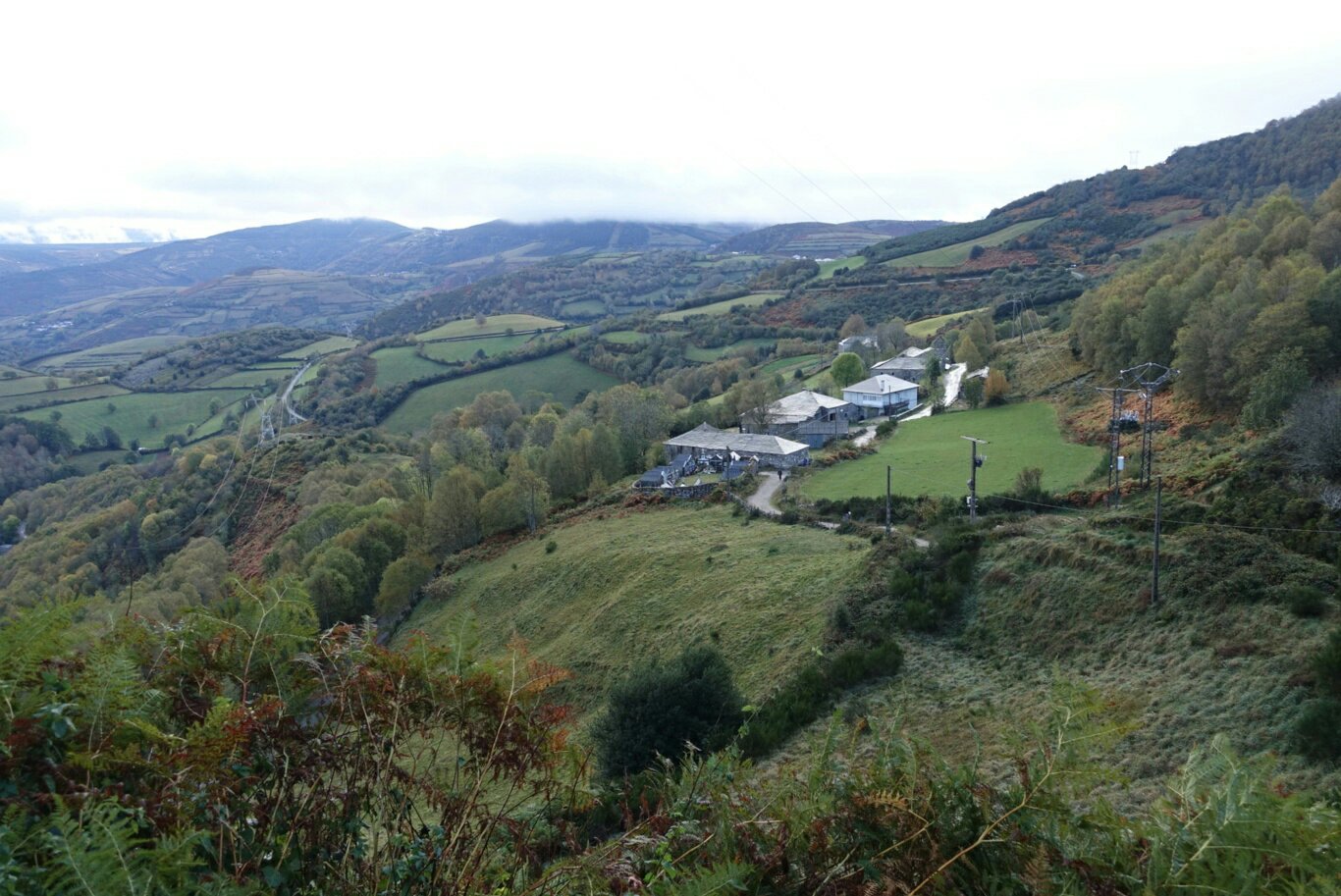 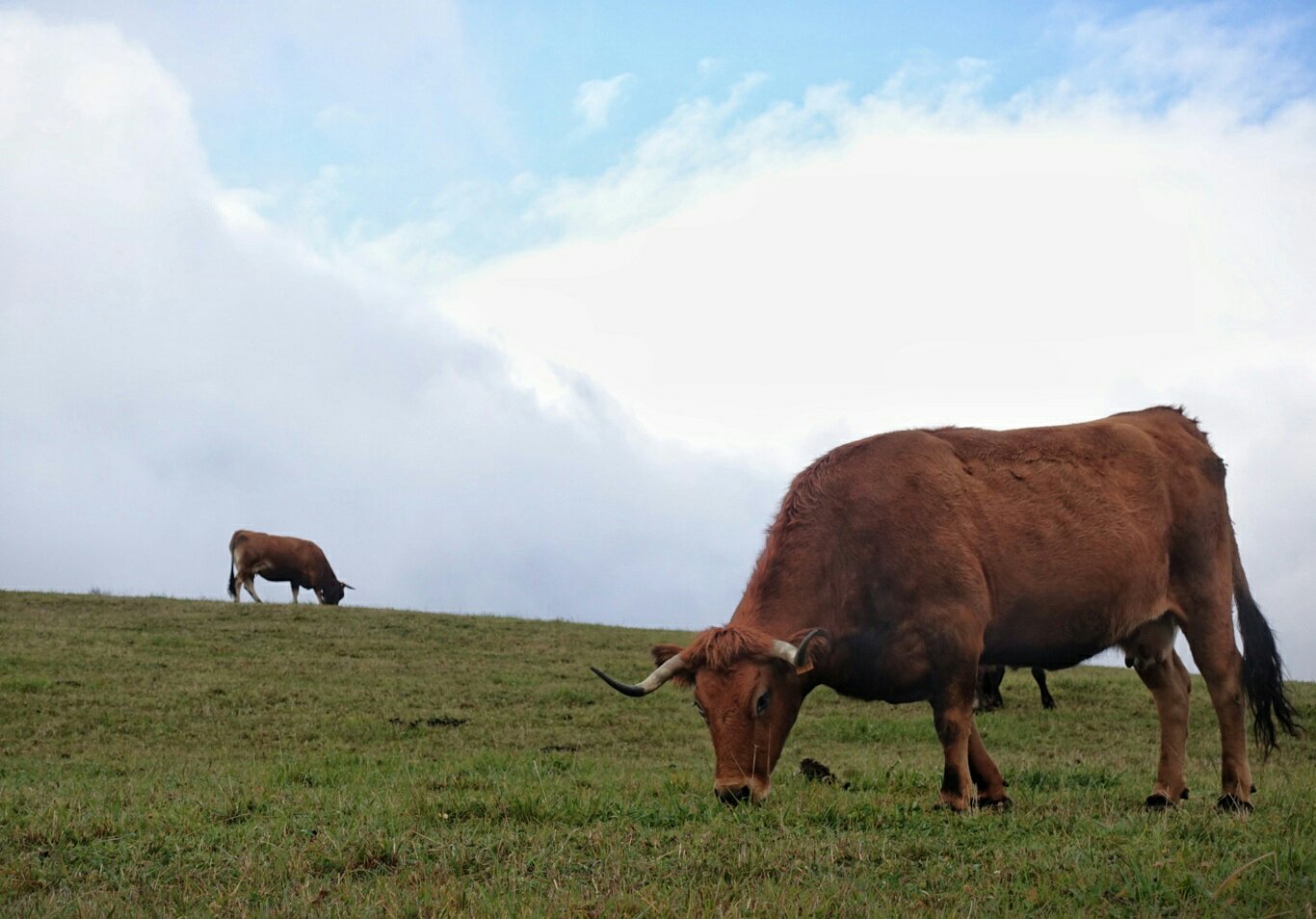 This may be excessively obvious, but I’m not sure how else to caption this photo, so here goes: Cows. 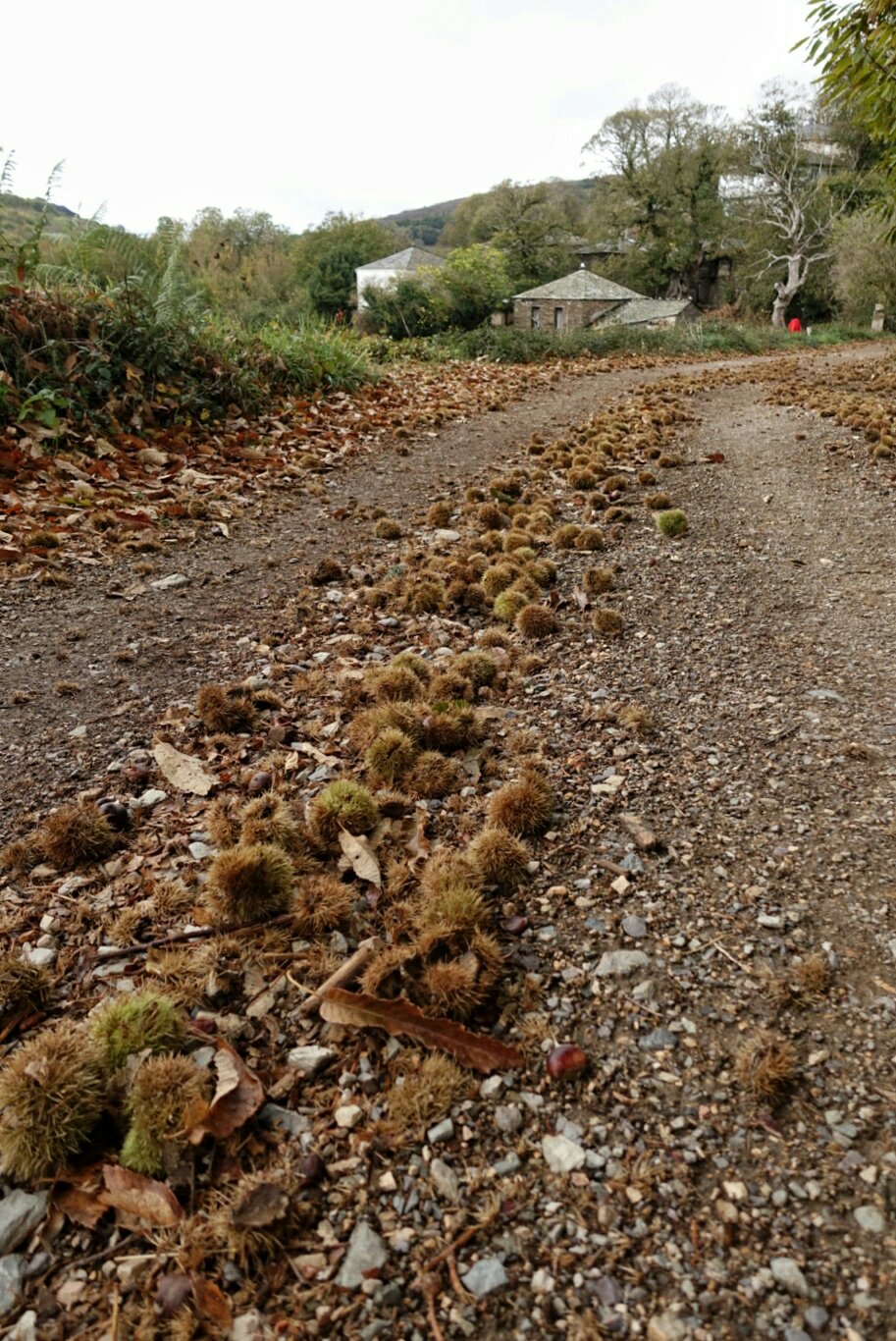 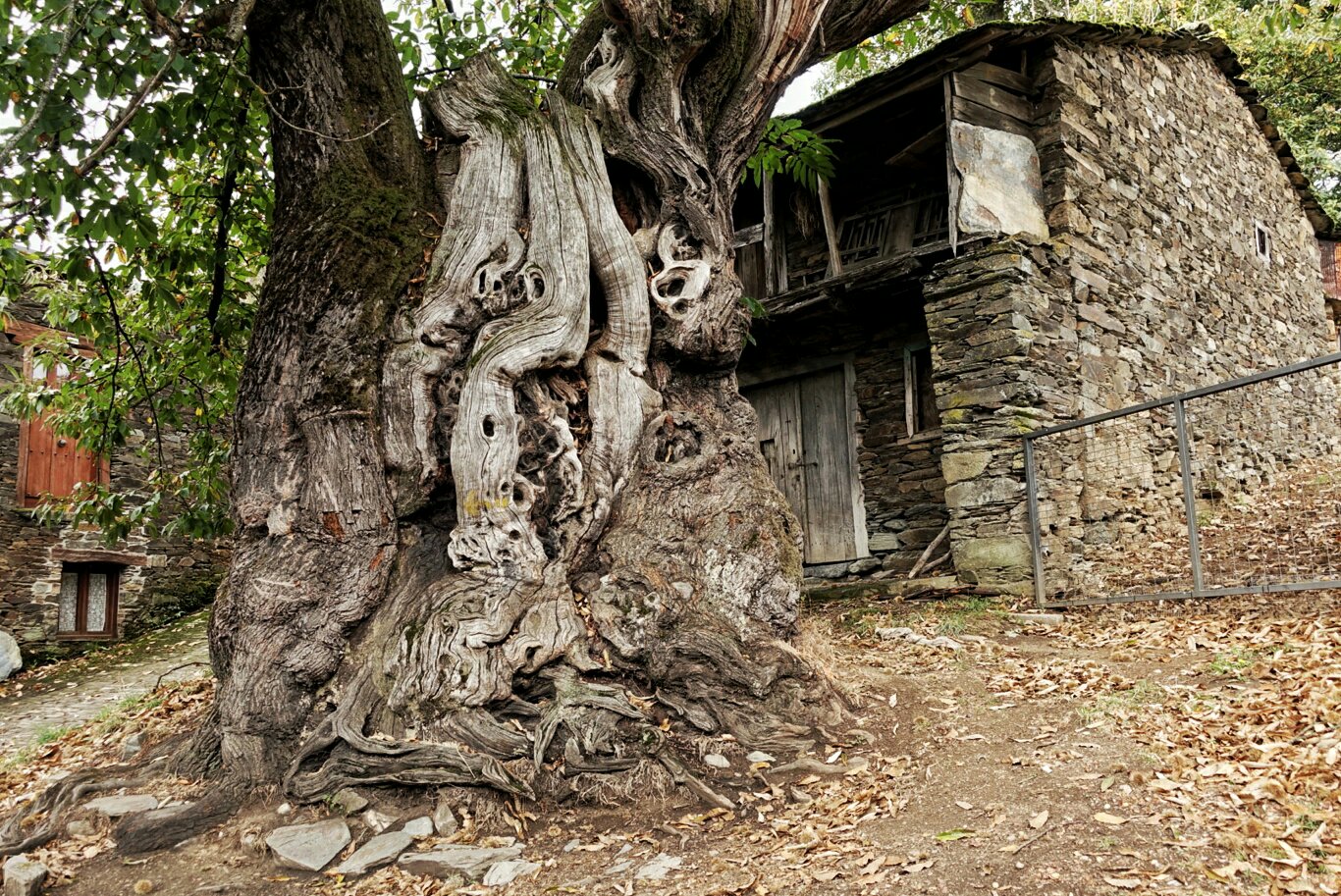 A nearby sign says that this chestnut tree is approximately 800 years old.