One of the goats that was being dragged up the street as part of last weekend’s Palm Sunday procession, bleating and shitting in terror, had a piece of masking tape affixed to one ear that gave its price. “Look!” breathed Kerry, rapturously. “That goat is only 250 pesos!”

I had signed up for this excursion through the Oaxaca Lending Library, knowing nothing at all about what I might be seeing, but feeling sure that it would reward my curiosity. Some of the most interesting experiences of my life have occurred when I put myself into someone else’s hands and gave them permission to show me something unexpected. “No te quedes en tu zona de confort,” as a decorated flowerpot reminded me. I met a half-dozen expats in the van that took us out of Oaxaca, including my new friend, Kerry, who may have been one beer away from goat ownership last Sunday morning .

A litter had been built at the entrance to the cemetery at the nearby pueblo of San Antonino, where the figure of Jesus, one hand raised in benediction, presided over a heap of produce that was growing larger by the second, as a team of serious, eager men piled up the offerings around him. The crowd was bringing in more produce for the litter, and also baked goods, lovingly packaged fruit, household necessities, blouses, small livestock – items intended for the auction that would occur after the procession, and whose proceeds would benefit the church and the community for the following year.

Women at the donation tables at San Antonino.

At some mysterious signal, we all processed the four blocks down the road to the church, where an enormous crowd had gathered under an awning. We didn’t stay for the auction – probably a mistake, in retrospect. Instead we visited the workshop of a blind sculptor in clay, a roadside weaving works where a young woman sat on a low wall with her boyfriend’s head in her lap and, with grim concentration, squeezed his blackheads and zits for every second of the fifteen minutes we were there, and then went to lunch, at a good place Larry the guide knew about. 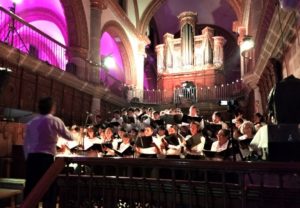 The choir at the cathedral.

On Tuesday evening, Kerry and I went to a Concierto de Música Sacra de Órgano y Coro at the cathedral, getting there early enough to ensure seating and chatting amiably as we waited. She told me about teaching in Nigeria as part of the Peace Corps, and about a British expat there who was wearing absurd madras shorts when he raced in on July 20, 1969 to exclaim, “The moon is ours!” She agreed very fervently with my opinion that we visitors should not be walking around in shorts – none of the local men do so, the shorts we choose are usually hideous, and knees and calves are no one’s most attractive feature. A procession of tall banners was carried into the cathedral just before the music started, as part of the Holy Week festivities; many of the young men carrying these lacked the presence of mind to avoid the chandeliers with their burdens, making Kerry and me wince and look away as the collisions came, one after another. The singers were local amateurs of varying ability levels, but the music was very nice; Bach, Pergolesi, Fauré, and so on. During the last piece, a skinny young man strolled into the open area in front of us, blocking the views of some of the other people, who reacted with outrage. “Borracho!” shouted a middle-aged man, giving the young man a hard shove. “El coro de los ángeles te reciba,” sang the choir.

I start Spanish lessons on Monday. Improving my Spanish will not help me get over how foreign everything seems, nor would I want it to; the foreignness of my surroundings is their chief allure. It should help me feel a little less anxious when I interact with waiters, though, or attempt to interpret signs, or ask for directions. Even if I were fluent, I am a foreigner here and will remain so. Even when the cultural references are familiar to me – when a young woman’s tee-shirt reads “Girl Power” or “Espresso Yourself” or “You Cute but You Broke Tho,” or when the buskers at the Zócalo play “The Pink Panther,” “Imagine,” or “I Will Always Love You” – I don’t really understand what they’re driving at. Why are they doing this? Why are those two guys dressed up as Plains Indians and playing pan pipes? And I’m even more confused when the cultural references are unfamiliar. Grasshoppers with the guacamole – really? Mariachi music – can you possibly be serious? Is this guy talking to me? No hablo español.

I visited Monte Albán yesterday, a series of ruins that command a hilltop only 10km from Oaxaca. This was the ancient seat of the Zapotec people, the civilization that ruled the area until 800 or 900 AD, when, as with the Maya, something went wrong, the cities were abandoned, and the local people returned to their farms. The Zapotec culture is not gone; I am told that many of the people I see here on the streets and markets speak Zapotec as their first language, and may not learn Spanish until they are taught it in school. Whatever remains of the Zapotec people, the civilization that built Monte Albán exists only in the minds of scholars, and even there only as a series of guesses.

The bus climbed the hills above Oaxaca, past pye dogs sleeping in the dust, concrete buildings topped by rebar sticking haphazardly out of support columns, graffiti, and scattered plastic trash. Finally, the sad buildings gave way to scrub, and then we arrived. 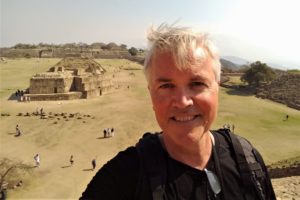 Whatever distance separates me from the people of Oaxaca, it is nothing compared to the gulf between me and the people who lived at Monte Albán. This observation is so obvious that it seems hardly worth making, but it is at the heart of my interest in ancient sites. The questions every visitor must ask themselves go beyond such conspicuous mysteries as where they got their water, where they grew and how they distributed their food, where they had their lavatories and what they were like, what the rules might have been to the games played in the ball courts, and so on. The more interesting questions have to do with their states of mind. What was their relation to their gods? How large a part did music play in their lives – and how did it sound? How did men and women view each other? What made these people laugh? When a priest stood here, on this platform, and looked south over the enormous courtyard, what varieties of reverence and power and complacency stirred in him? If I could have had one of those priests with me, and could have walked with him from ruin to desolate ruin, and taken him with me back to Oaxaca, jouncing down the winding road from the hilltop to the crowded, noisy city – what might he possibly have felt? How would he feel about having been unable to imagine the terrible fate that would befall his beloved city, and the unthinkable futurity that created the modern city of Oaxaca? Why are those two guys wearing feathered bonnets and playing pan pipes? At least people are eating grasshoppers with their guacamole, thank the gods. What keeps the buildings from falling down? Where are the images of the gods and kings? Where is that music coming from? Is this guy talking to me? No hablo español.