I Can’t Be the Only One

Today was only my tenth day of walking. Ten seems like such a small number – it’s only three more than the total of my unblistered toes. If my calculations are correct, I’ve covered almost 150 miles so far.

Santo Domingo de la Calzada (“Calzada” being yet another word for “road”) is dominated by a lovely church, with an attached art museum that includes many fine pieces of early sacred art. The church contains a magnificent 16th century altarpiece, so rich and complex and enormous that I stood and stared at it until my neck started to hurt, and the tomb of Santo Domingo himself. The most memorable element, though, is the chicken coop. I’ll quote from my guidebook:

Legend has it that a pilgrim couple and their son stopped at an inn here on their way to Santiago. The pretty innkeeper’s daughter had her eye on the handsome lad, but the devout young fellow thwarted her advances. Incensed by his refusal, she hid a silver goblet in his backpack and reported him for stealing it. The innocent lad was caught and condemned to hang. Some accounts suggest the parents continued on their way, oblivious of the fate of their son, and on their return from Santiago they found him still hanging on the gallows but miraculously still alive, thanks to the intervention of Santo Domingo. They rushed to the sheriff’s house and found his lordship about to tuck into dinner. Upon hearing the parents, he retorted that their son was no more alive than the cock he was about to eat, whereupon the fowl stood up on the dish and crowed loudly. The miracle was not lost on the sheriff, who rushed back to the gallows and cut down the poor lad, who was given a full pardon. We are left to speculate on the fate of the maiden.

To help ensure that this miracle remains in the popular imagination, a couple of chickens are living in the church, in what is likely to be one of the most opulent chicken coops in this part of northern Spain.

When walking out of Santo Domingo this morning, I found that the little pockets on my hip belt still contained the remains of some snacks I’d bought a few days ago. The marcona almonds were gone, as was the apple, but I still had some dried chestnuts left. Dried chestnuts are, as it turns out, almost but not quite inedible.

Chewing a dried chestnut right away is out of the question. You put one into your mouth and it sits there obstinately, giving off a flavor that inhabits that Ikea space somewhere between wood and plastic, until finally it has macerated long enough that using your teeth on it is possible. The first couple of shards seem sweet and almost nutty, but then the bitterness begins, and then it gets worse, and you wonder whether you might have gotten a bad one. But no. They’re all like this.

I cannot be the only person who, as a kid, once pried an ancient piece of chewing gum off the bottom of a chair and popped it into my mouth. The experience was similar to eating a dried chestnut. First, the inelastic object makes no concessions to your teeth whatsoever, but then, finally, you start to make inroads, and some hint of flavor, and even sweetness, seems to justify your crime. But then comes the nastiness and the regret. Old chair gum is worse than chestnuts in the category of “saliva of unknown strangers,” but it is better when it comes to the sweet savor of sin. It’s a toss-up. If you’ve tried one, you needn’t try the other.

Today’s walk took me through half a dozen little villages and past mile upon mile of fallow fields. I discovered as I approached Belorado that my Putamayo recording of music from the South Seas is the perfect soundtrack for marching into a little town just east of Burgos. I found a first-rate albergue, where I spent a few Euro extra for a room with only five other beds; I almost wept when I saw how tidy and clean and well-thought-out my room was. After changing out of my hiking clothes, taking a shower, and tending to my feet, I found a café on the main square at which I was able to order a sandwich after a long but by no means unendurable wait, and then I strolled through the old Jewish quarter and climbed the hill to the more than usually ruined ruins of the castle that used to loom over the city, and its fine view overlooking Belorado.

And now I’m back at the albergue. Some Japanese pilgrims are building a plastic toy they found in a Kinder egg. The can of San Miguel Premium Especial at my elbow still contains a few swallows of beer. I will be served dinner in an hour. Life is good.

Another sunrise, this time with pilgrims. 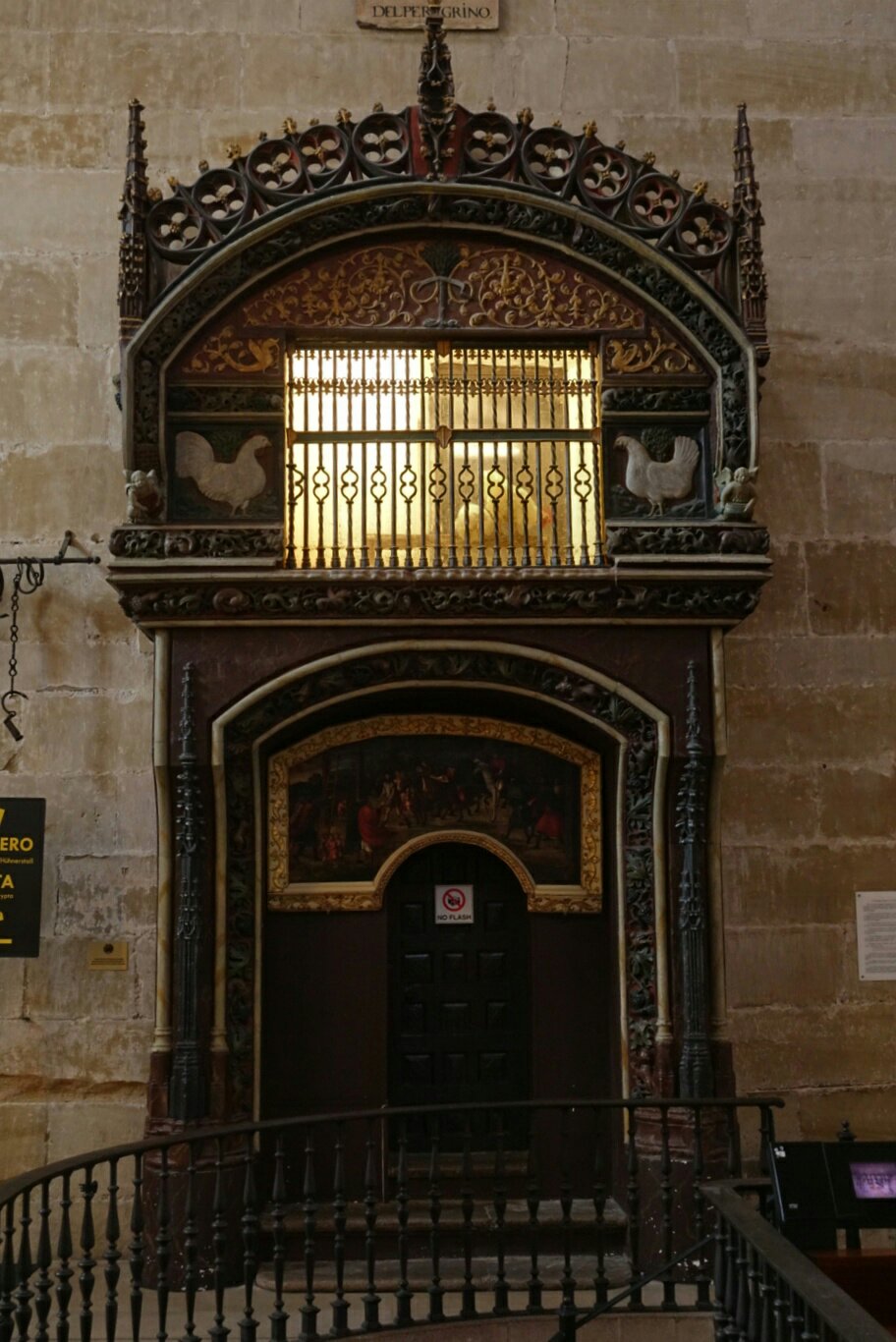 The chicken palace in the church at Santo Domingo. 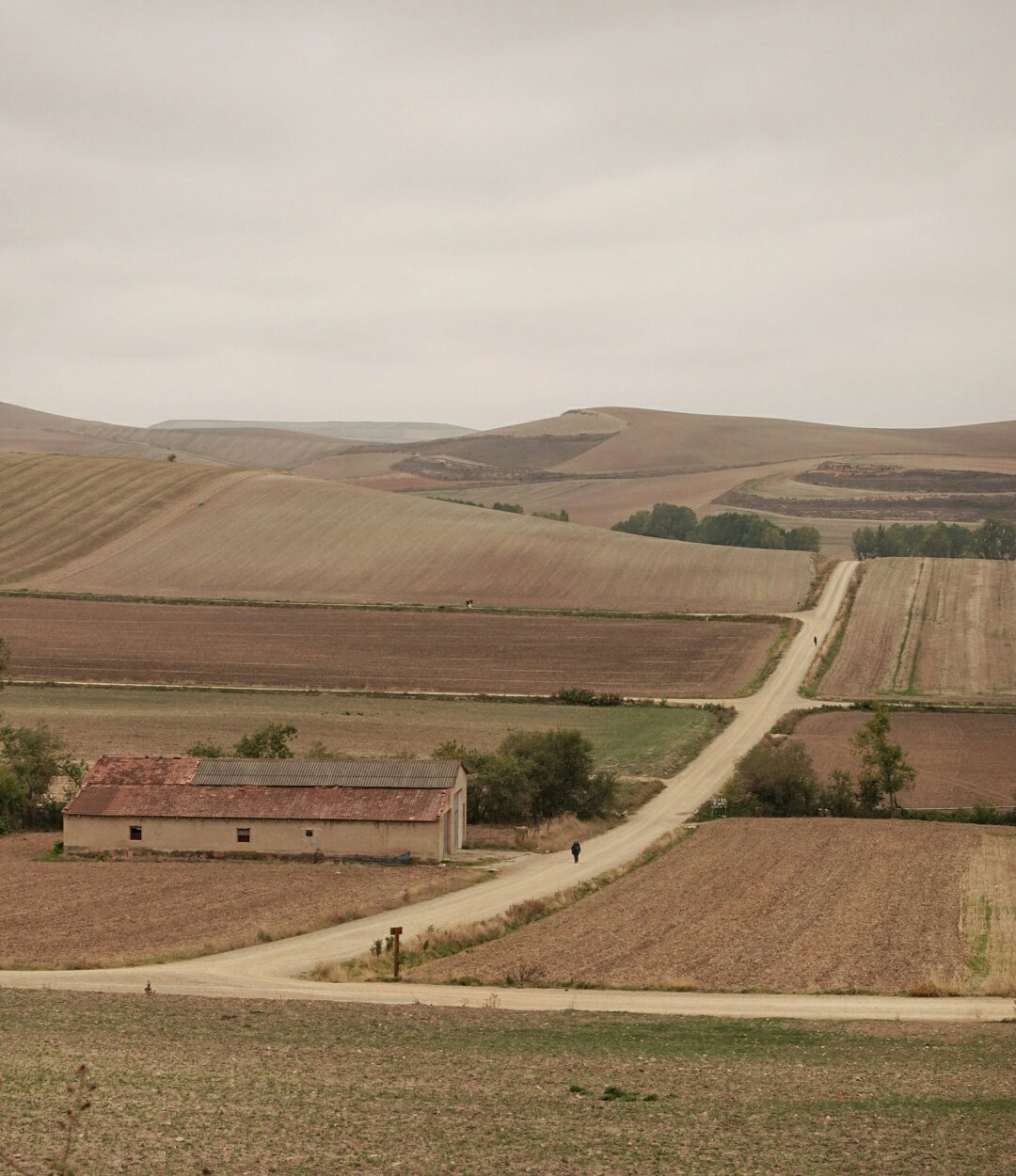 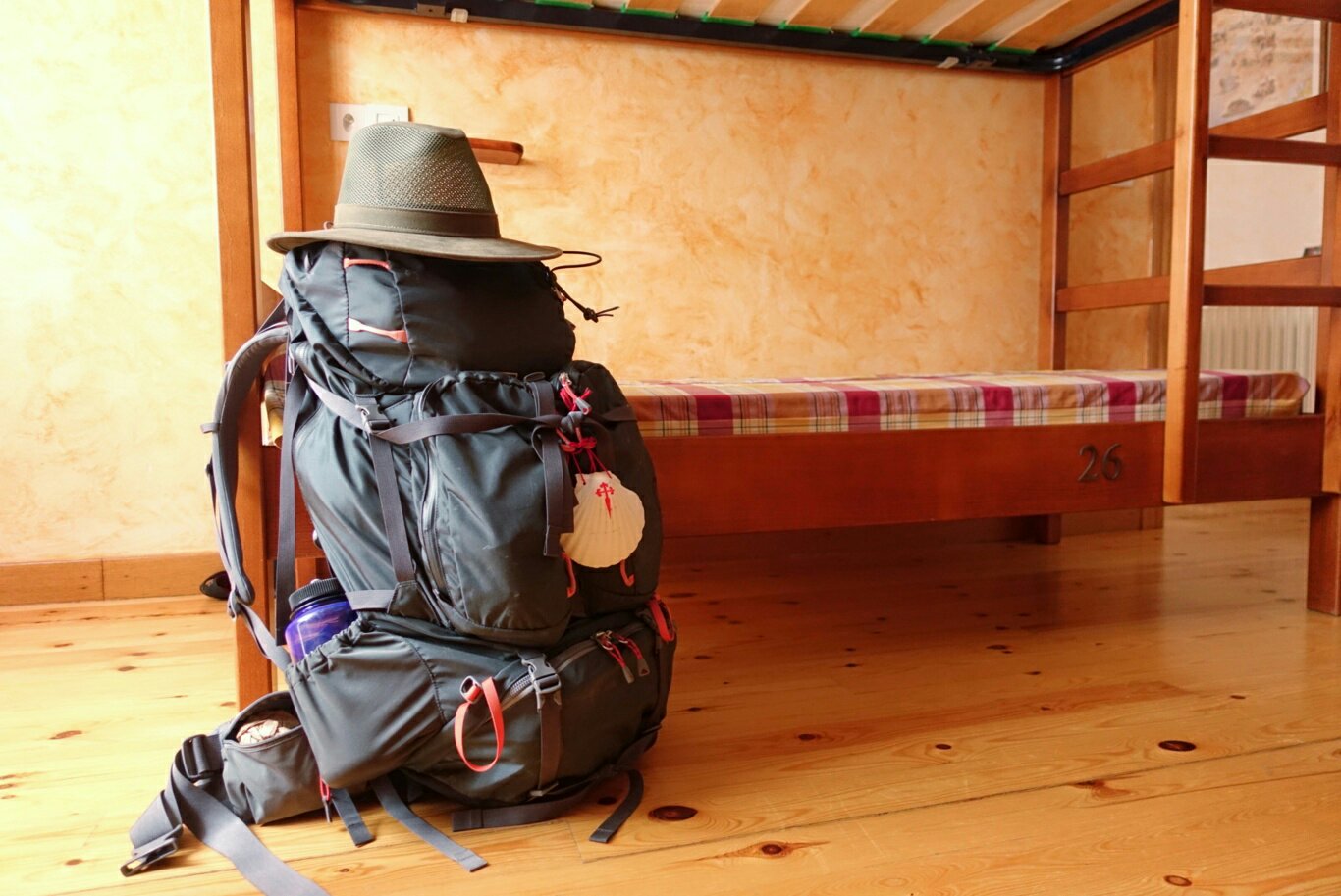 My gear and my opulent bunk in Belorado. 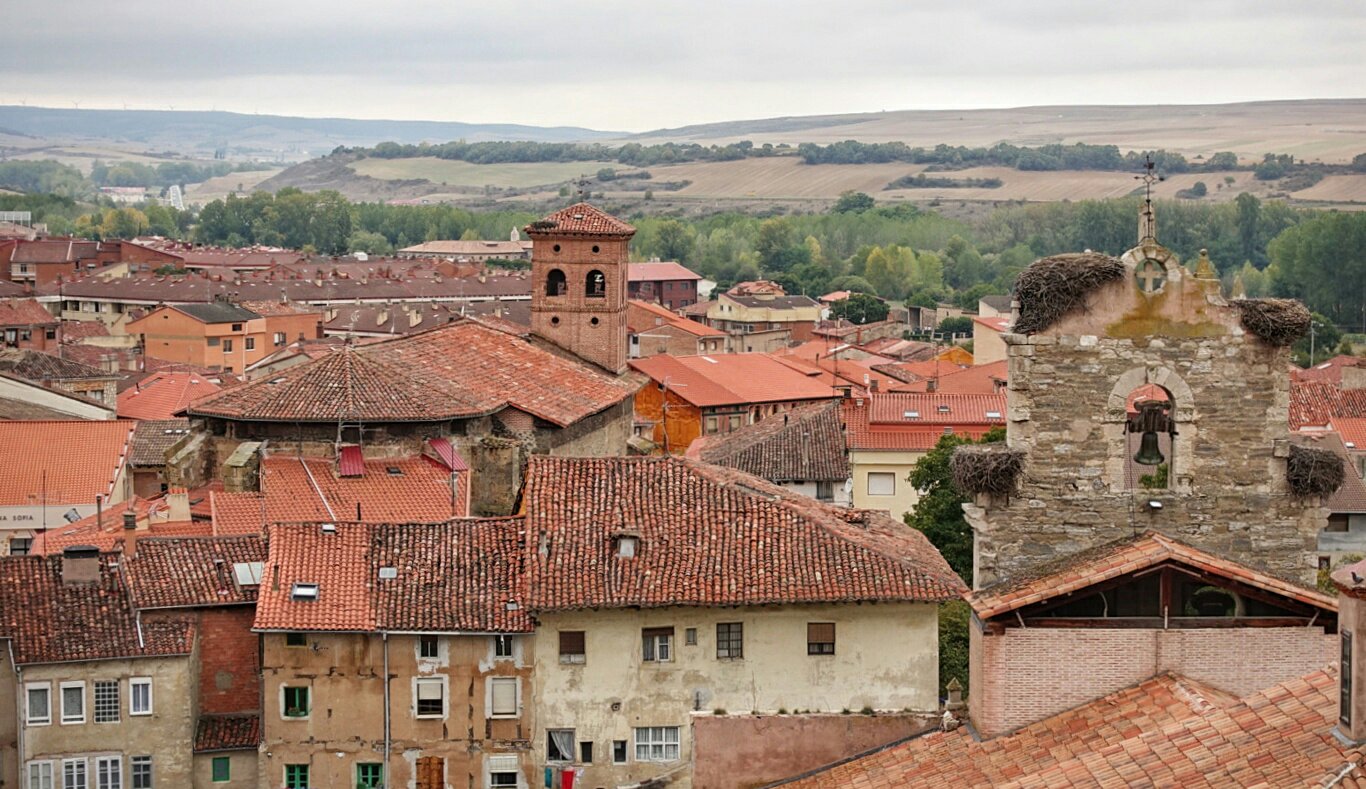 Rooftops in Belorado. Note the stork nests on the bell tower. On the ridge in the far distance, you may be able to make out wind turbines. 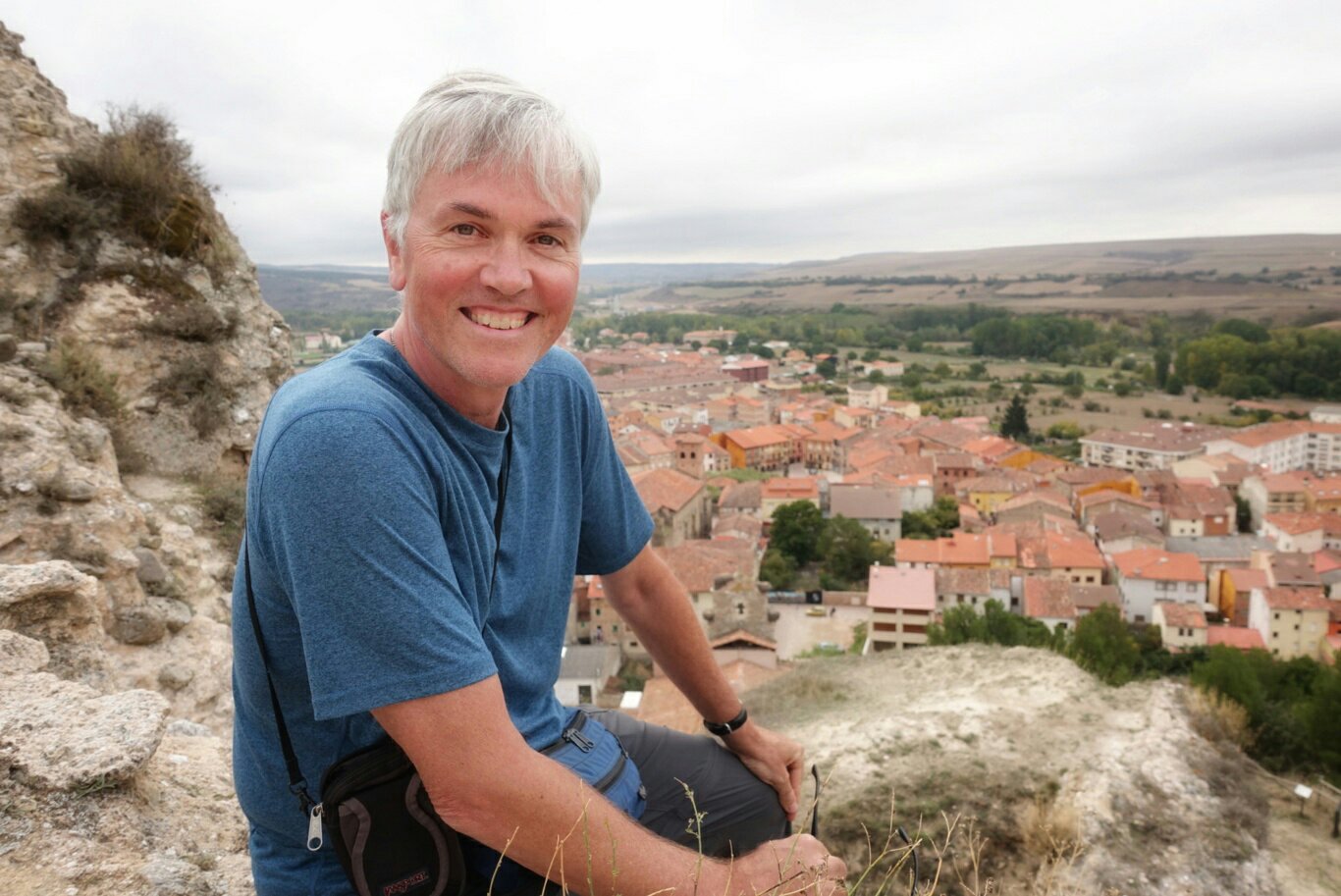 Me, from the ruined castle above Belorado.