The Australians with whom I was sharing a room in Astorga started moving around before 5:00 AM. I spent about half an hour trying to convince myself that I could go back to sleep in the intervals between zipper pulls and headlamp flashes, but soon I was awake enough to understand the futility of this ambition. I groped my way out of Astorga in the dark, coming with some relief to a path at the edge of town that was unquestionably the Camino, and headed west into the mountains.

I had breakfast at an excellent bar in a little town whose name I never learned. I dropped my pack and hiking poles on the patio and strode inside, thinking about café con leche. “Hey!” said an older pilgrim at a corner table. “It’s Jimmy Stewart!”

The hills continue to get greener and woodier. I said something about this to a young woman whose stride matched mine for a few minutes.

“I know!” she said. “What a relief! Finally, trees I can hide behind when I pee!”

This part of the Camino goes through Maragato country. The Maragato are or were a culture whose clothing, food, and architecture were unique to the area, but they appear to have all but vanished. The Maragato villages I walked through were largely abandoned; a hand-lettered sign saying Se Vende was propped up against a pile of rocks that hadn’t been a building for a very long time. In Astorga, tourists gather every hour in the square to watch two statues wearing Maragato costumes swivel mechanically to strike the hour with their hammers, in the least interesting display of technology I’ve witnessed since the last time I used toenail clippers.

At about three o’clock I reached a high point on the trail where a cross has been erected, the Cruz de Ferro. Pilgrims traditionally add a stone to the enormous heap that has grown at the base of this cross. I contributed a glassy green rock that I had carried out of the mountains on my most recent hike to Ingalls Lake; I have been carrying little fragments of this mineral away from Ingalls Lake ever since my first visit there, 45 years ago. I love those little green rocks, and now Spain has one.

My destination for the day was Manjarin, a ruined Maragato village that my guidebook says has a single occupant – Tomás, who is the hospitalero and keeper of the flame for the Knights Templar. Ever since seeing my wife’s photos of her stay in this place I’ve been itching to see it myself.

If, in some not very possible cataclysm, a gypsy camp, a hippie tree house, and a shocking number of flat rocks were violently conjoined, killing everyone except two of the hippies, one old gypsy man, and an indeterminate number of dogs, the disaster might produce something like Manjarin. I climbed up to the entrance, through the dust, over the uneven flagstones, past dozens of tattered flags, renderings of an Anglo-Saxon Jesus, something about Edgar Cayce, a wary white dog chained in a dirt yard and barricaded behind a couple of shovels that had been jammed between fenceposts, through a doorway made out of scraps, and into a “room” that seemed to be a souvenir shop, a religious sanctuary, a propaganda outlet for the Knights Templar, and a place where thirsty pilgrims could get water or coffee in exchange for a donation. No mention of lodging that I could see. There was one other pilgrim in there – a crazy guy I’d seen earlier, who muttered to himself and scratched vigorously at his badly sunburned pate. As I approached the refreshment table, he rasped “no coffee,” in minatory tones, but I just said, “De nada” and had a drink of water.

A bearded young man appeared and urged us to have something to drink. He did not mention the donation box at the end of the table. When I asked him about lodging, he shook his head dubiously and said, “Yes, but no electricity, no Wi-Fi, no…” He caught my eager look. “You want to see?” he asked, with happy surprise.

I slept in a building that must have been used at some point to store fodder or maybe to house animals. The other hippie, who had even less English than I have Spanish, explained that I should sleep in the loft, because he slept on the ground floor with his dogs. “They are my heart,” he explained, clutching his chest. The latrine was a squat-toilet outhouse across the road. There was no obvious source of water. I was the only guest.

Three or four dogs appeared to be running free. The hippies told me about life in Manjarin while the dogs milled about. “The mountains! So beautiful! The air! Leo! No!” A whirling mass of growling fur tumbled by. “No!” After the dogs had been separated. “It is so, no se, God has his arms…” He made a hugging motion. “We have no… Esteban! No! No!” Another dog fight is broken up.

I was told there would be a communal dinner at 7:00 or so. In the meantime, I hung around outside the “room,” using a pile of sticks as a pillow while I read Don Quixote, and making friends with the white dog who was chained up nearby. All he wanted was his freedom, and that, for some reason, was the thing he was being denied. The hippies sat at a table nearby, playing the guitar inexpertly and working on a song called “In Nomine Dei.” I assume that’s what it was called, anyway – that was the only lyric.

I met Tomás shortly before dinner. He was gruff, matter-of-factly monolingual, he wore camo pants and a down vest, and he was covered in what appeared to be an ancient and entirely unapologetic layer of dirt. A large coptic cross hung around his neck. At something like the appointed hour, he said something to me and made a gesture that implied I should follow him. Past a door marked “Reservado,” he disappeared into the darkness. When I hesitated, one of the hippies, who I hadn’t been able to see in the gloom, said, “Come, come” and welcomed me inside.

Dinner began with some discussion between Tomás and the hippies, but then settled down to silent eating. The room was lit with two LED lights and a candle; the result was a darkness that would have seemed oppressive to Homo antecessor. Bric-a-brac and bits of junk lurked menacingly in the shadows. Finally, one of the hippies asked me what I thought of Donald Trump, and the evening brightened.

People are not Spanish, and not Catalonian; people are humans. Korean guests are interesting but demanding. The recent hurricanes are probably the result of God being unhappy with Trump. Something about the Masons. No, none of the states in the United States are thinking about seceding. Not even Texas. Something about the Illuminati. Hippie 2 had made the dinner – delicioso! Mi gusta mucho!

I used a headlamp to make my way to my loft, stopping to conciliate the white dog, who had been alarmed by my unexpected appearance. I opened a bag of sunflower seeds that I’d been carrying for just such an occasion and used it to supplement the dinner I’d just been served.

I slept beautifully. At one point, Hippie 2, sleeping downstairs, yelled “Leo! No!”, but that was the only interruption.

Breakfast was a prepackaged sweet cake – something like a Twinkie without the filling – and yesterday’s cold coffee, poured from an enormous kettle with a twisted wire bail and a plastic handle that had melted into an oblong blob in some bygone misadventure. There had been an earthquake in South America, according to Tomás. This time, the fault was not attributed to our President. “It is evolution, natural,” said Hippie 1. “It is like, what is it, Neanderthal? And then, in one hundred years, you! Me!”

“It is an aura,” said Hippie 1, and then something about astral planes. Hippie 2 said he thought I had an alma blanco, which translates to “white soul,” which I will take as a compliment, although he had no possible reason for making this judgment.

After packing my gear, I returned to the “room,” to say my goodbyes and stuff the donation box. The inhabitants of Manjarin were playing some kind of grand music over invisible speakers; think of Hail Freedonia as reimagined by John Williams. Then the hippies appeared, each carrying a medieval halberd, from which tattered flags hung halfway to the floor. And then Tomás arrived, carrying a sword. The hippies stood at attention behind Tomás while he addressed a statue of the Virgin, lifting the sword and bowing his head reverentially. This was not a show they were performing for their guest. This was a sacrament they performed every morning. They were doing their best to carry on the tradition of the Knights Templar – and, I suddenly realized, they were succeeding. They had fed and protected me, a complete stranger, purely because I am a pilgrim, and asked no more of me than I was freely willing to give. They were clawing a living out of a pile of rocks on a desolate ridgetop. Their sincerity legitimized them.

I stopped to say goodbye to the white dog. “You’re a good boy,” I said, scratching his ears. “I’m sorry about what has happened to you. I hope you have a good life. I will never see you again.” The dog looked into my face and wagged his tail, and my eyes filled with unexpected tears. 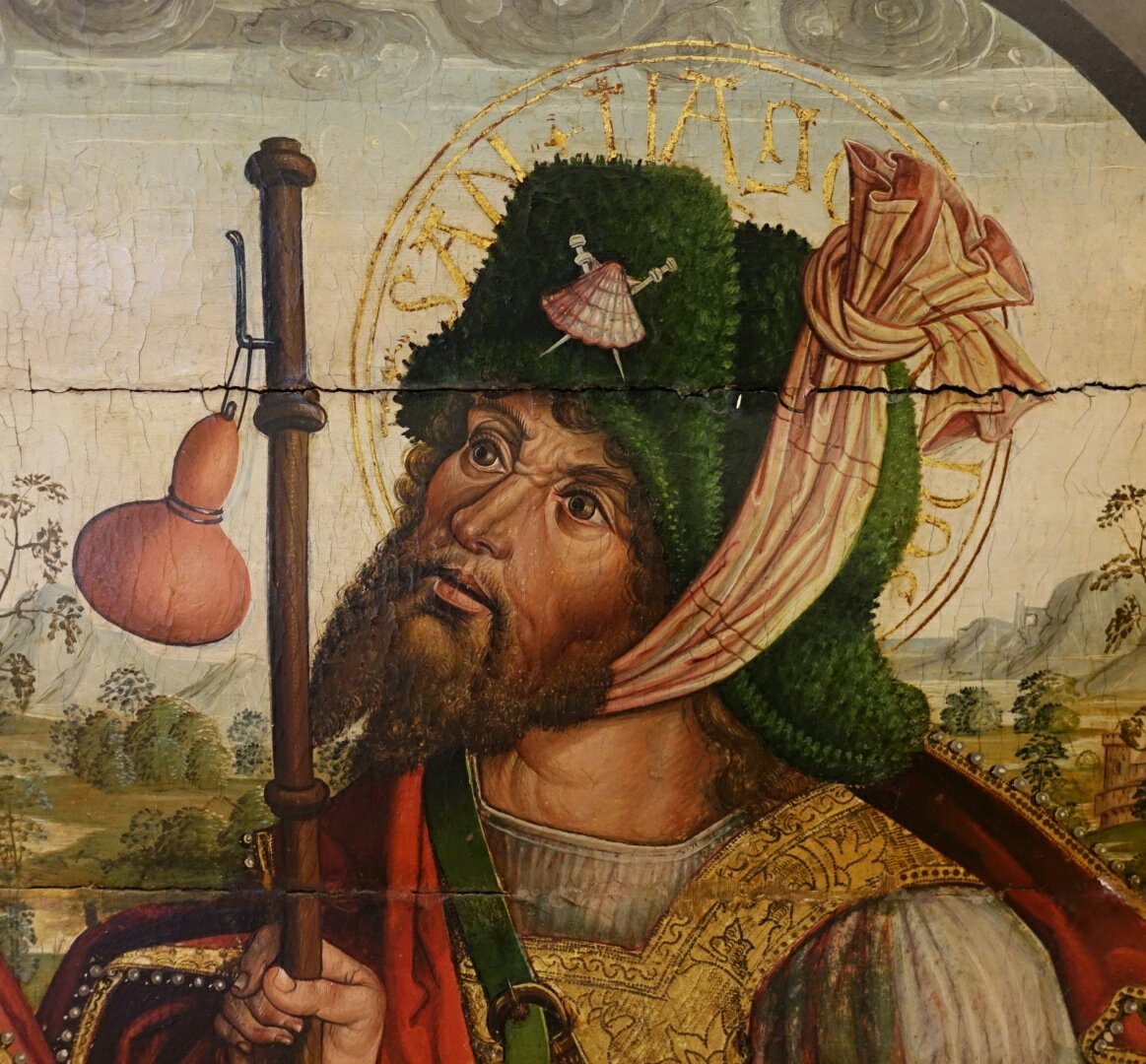 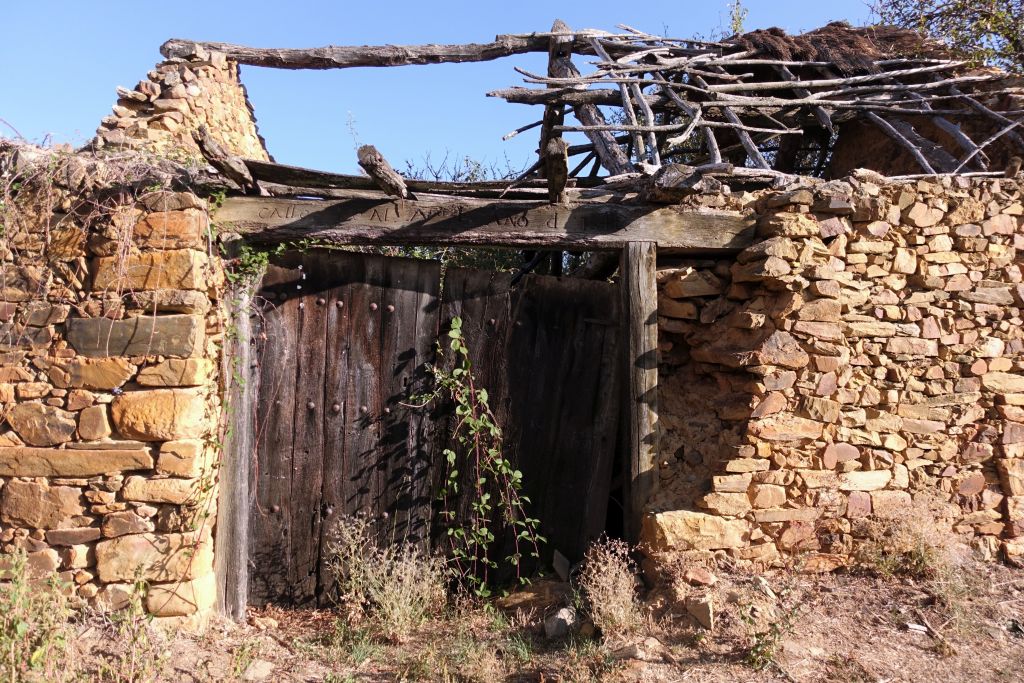 An enlargement of the lintel in the photo above, into which are carved the words, “Calle Real No. 4 Ano d. 1841” 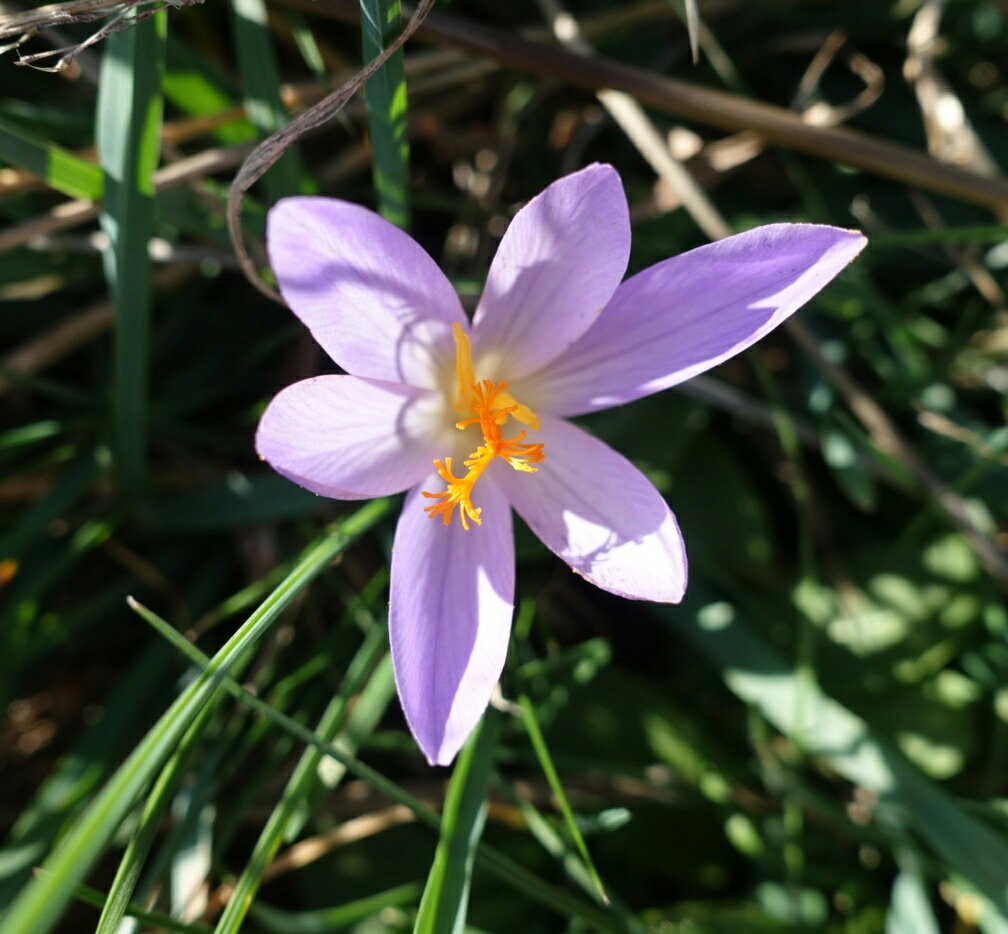 These little crocuses have been constant companions along the Camino. 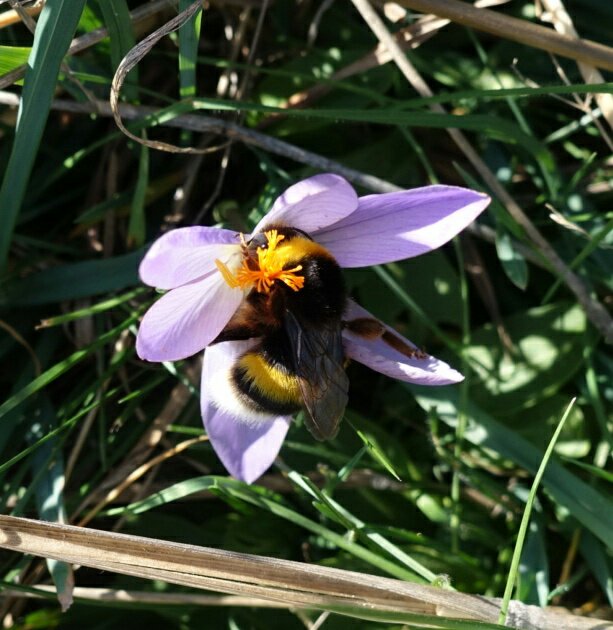 A gargantuan bumblebee perpetuates the species. 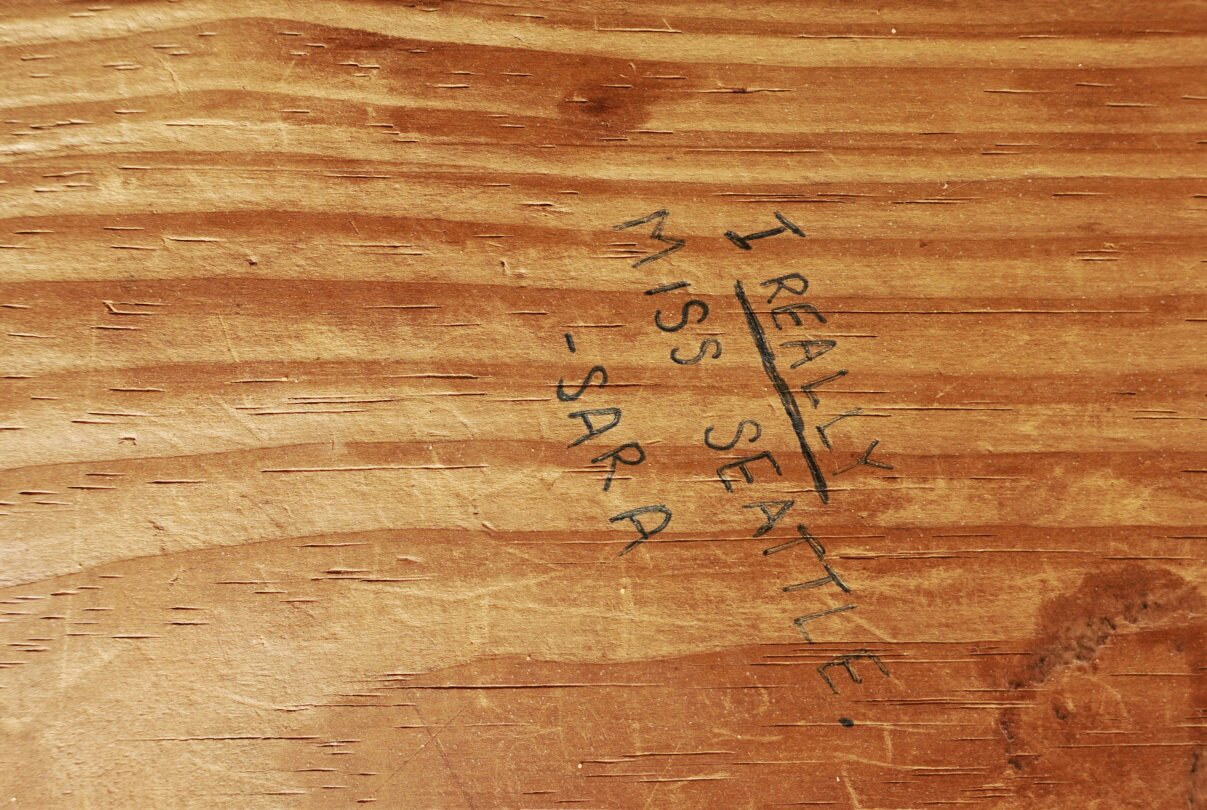 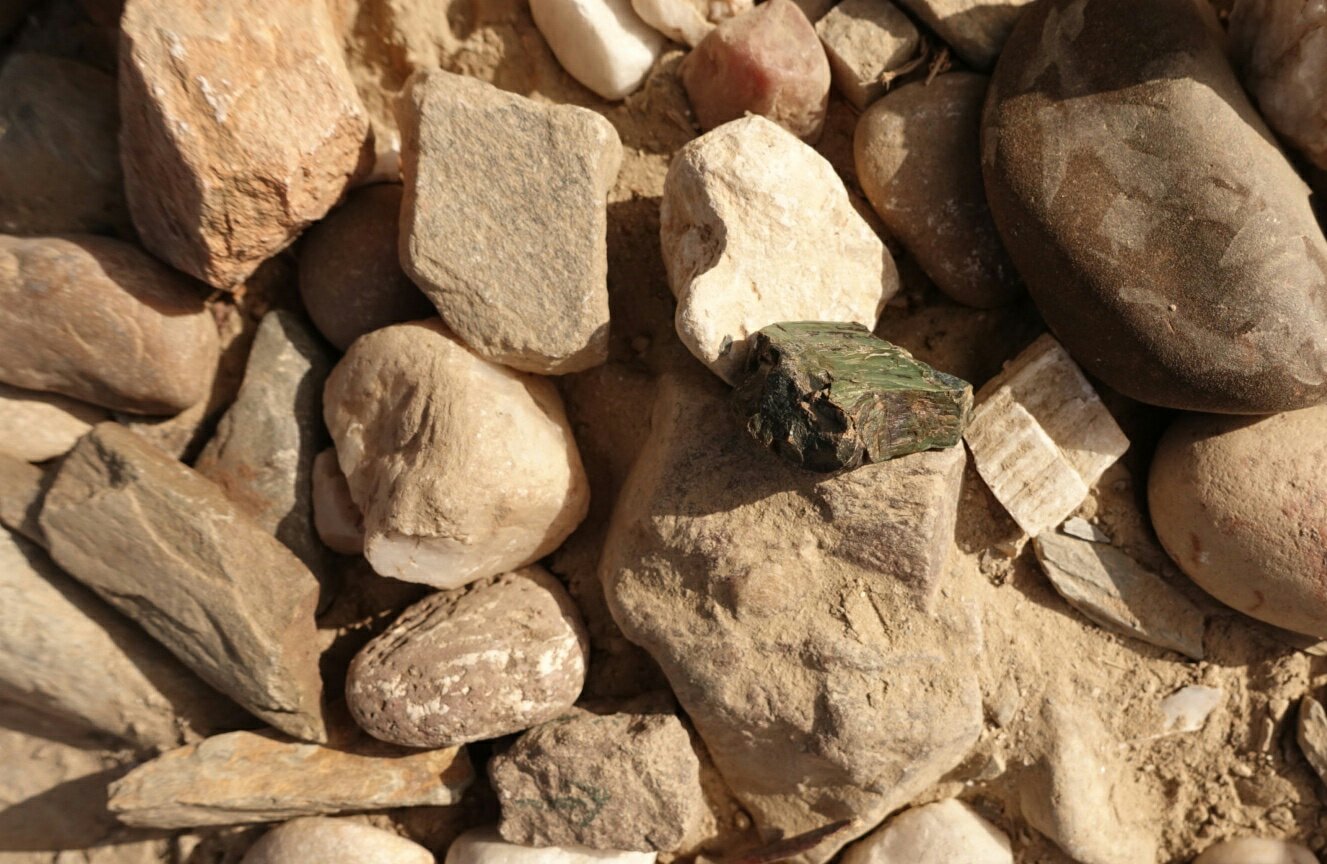 My green rock from Ingalls Lake. 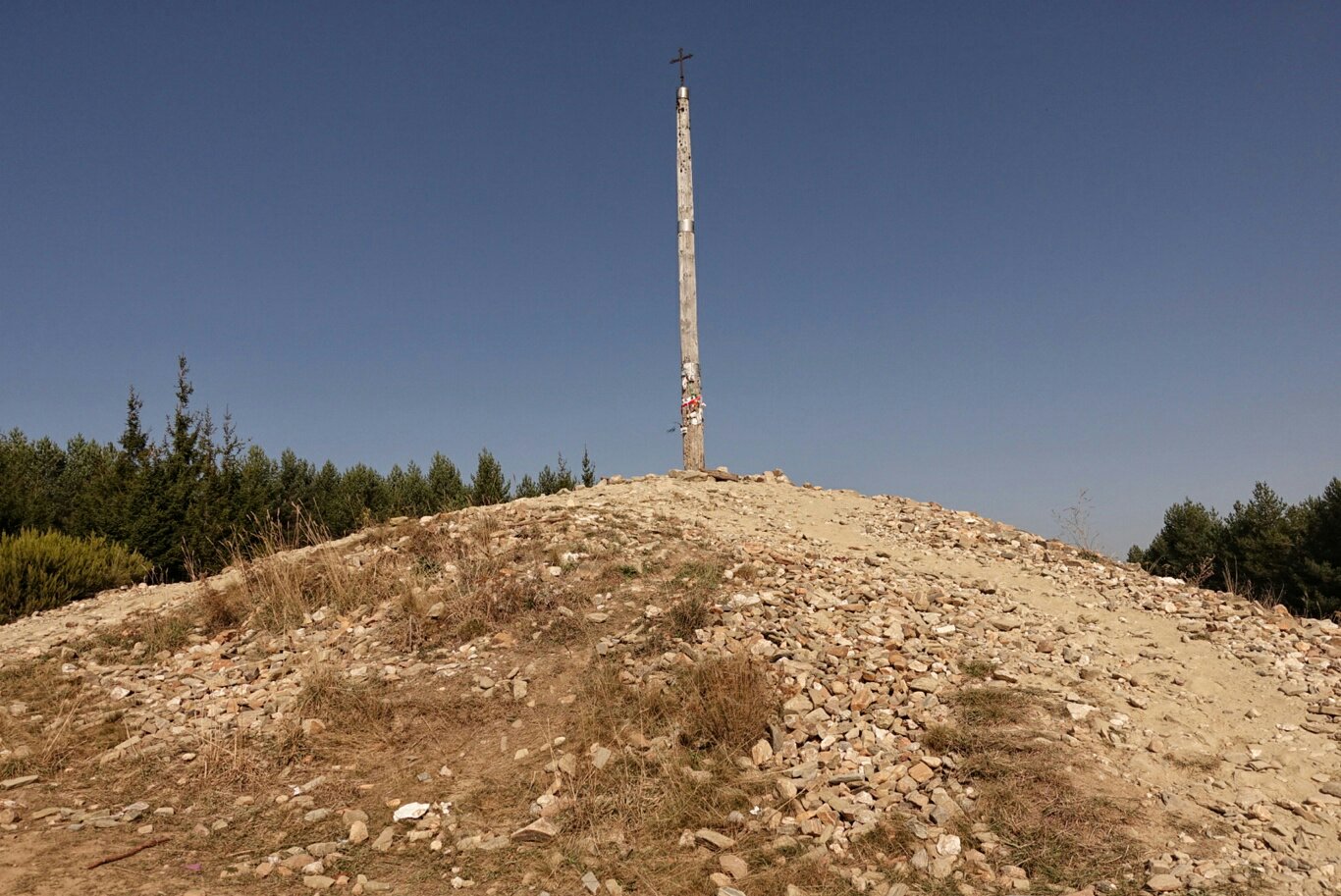 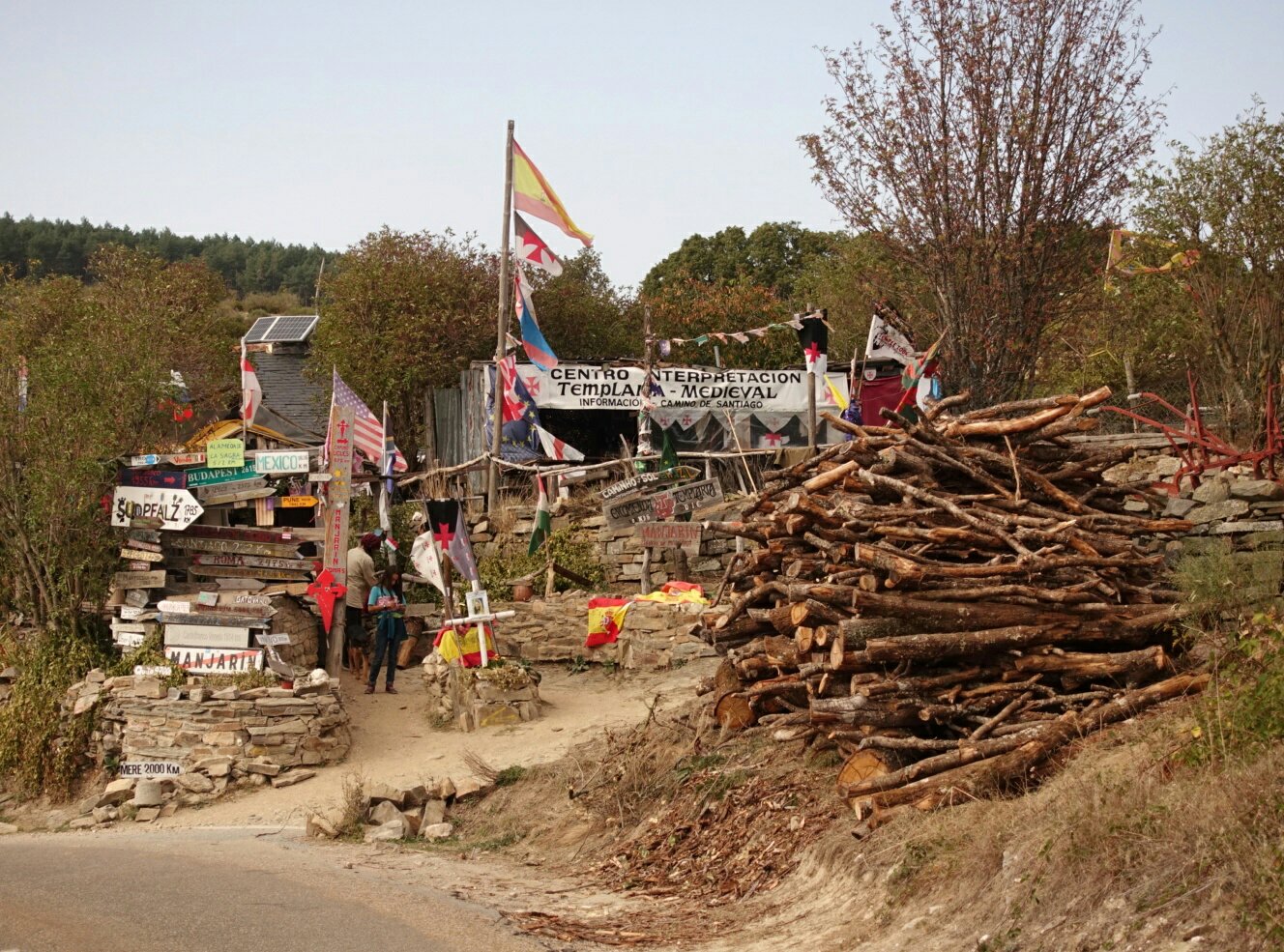 The home of the Knights Templar in Manjarin. 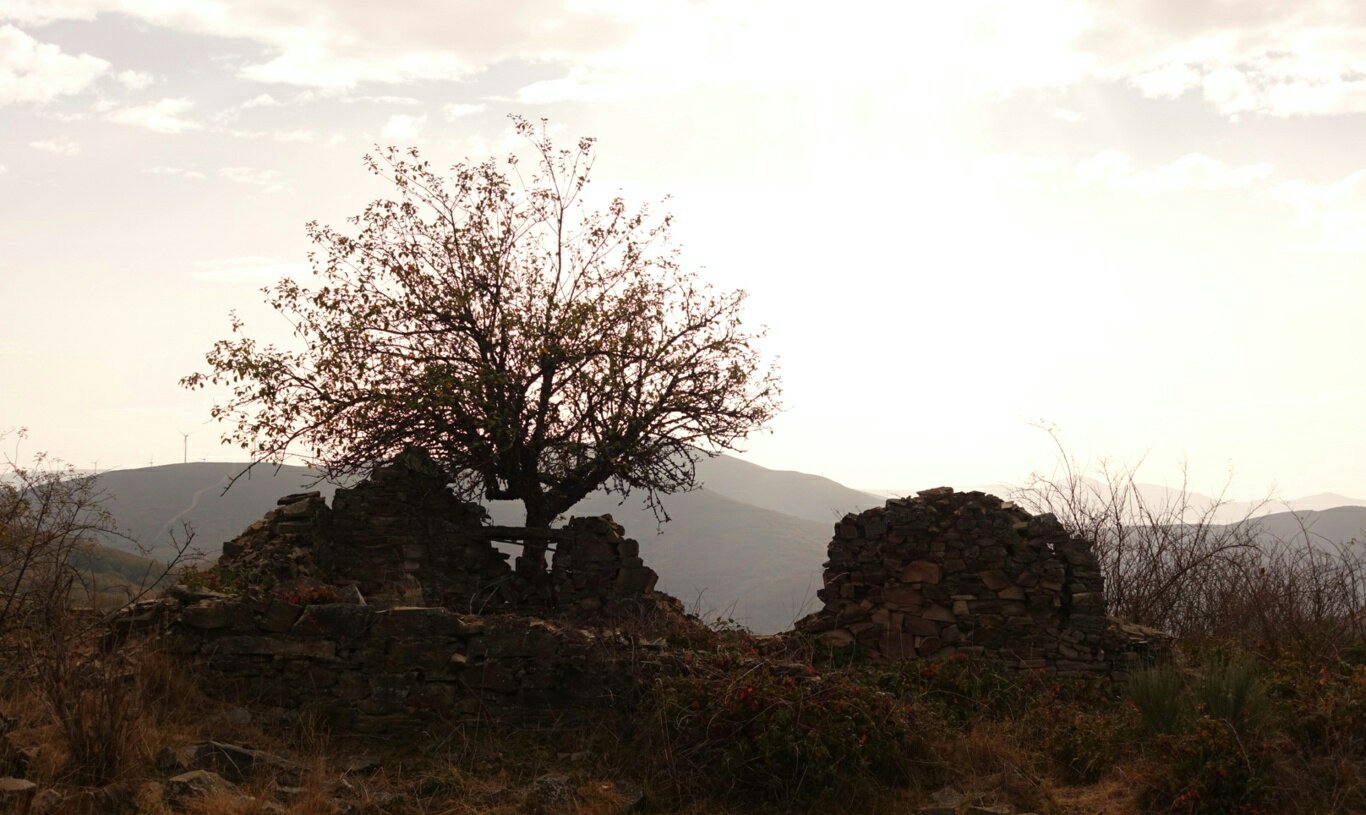 A ruined home in Manjarin. 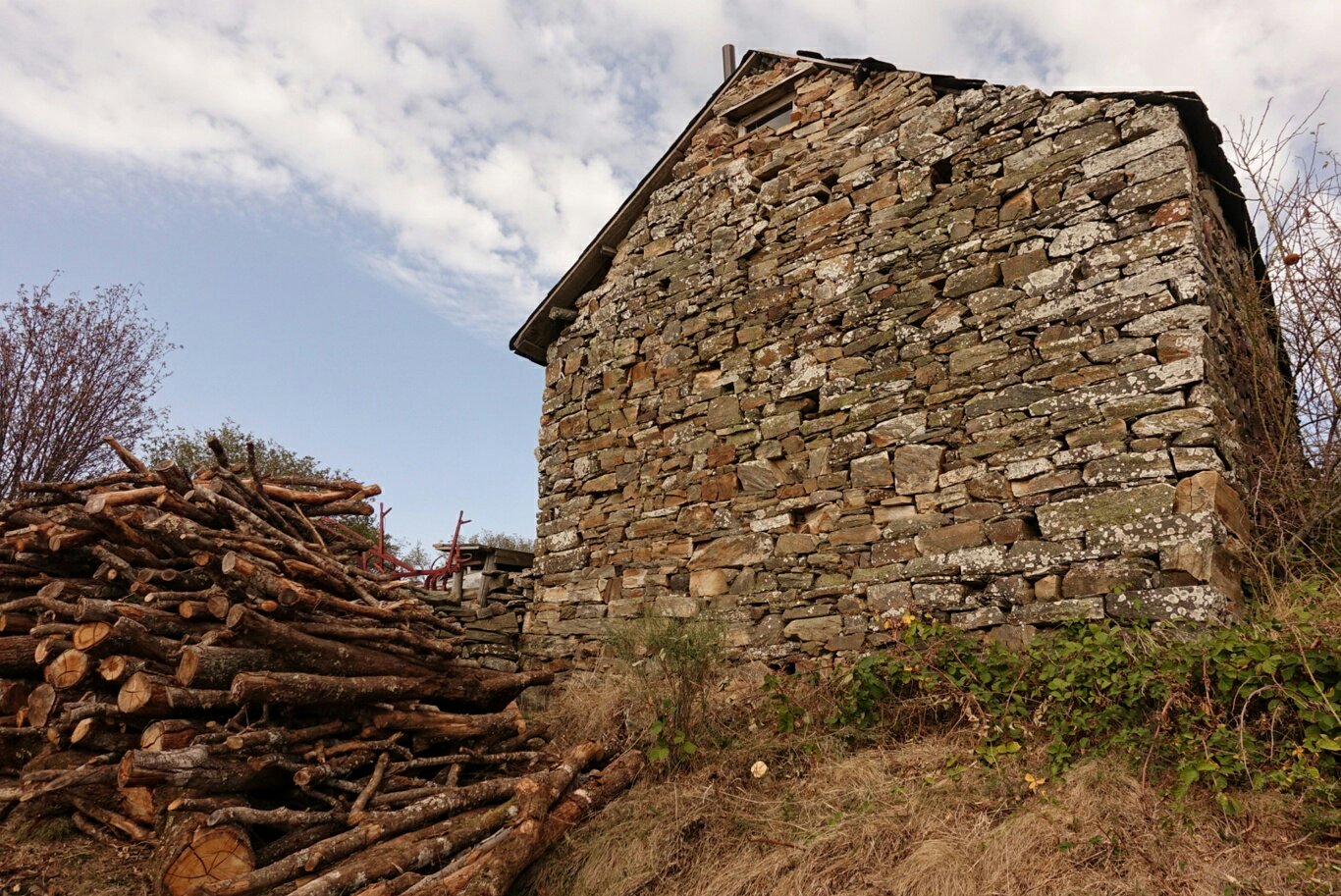 I slept in the loft of this stone barn. 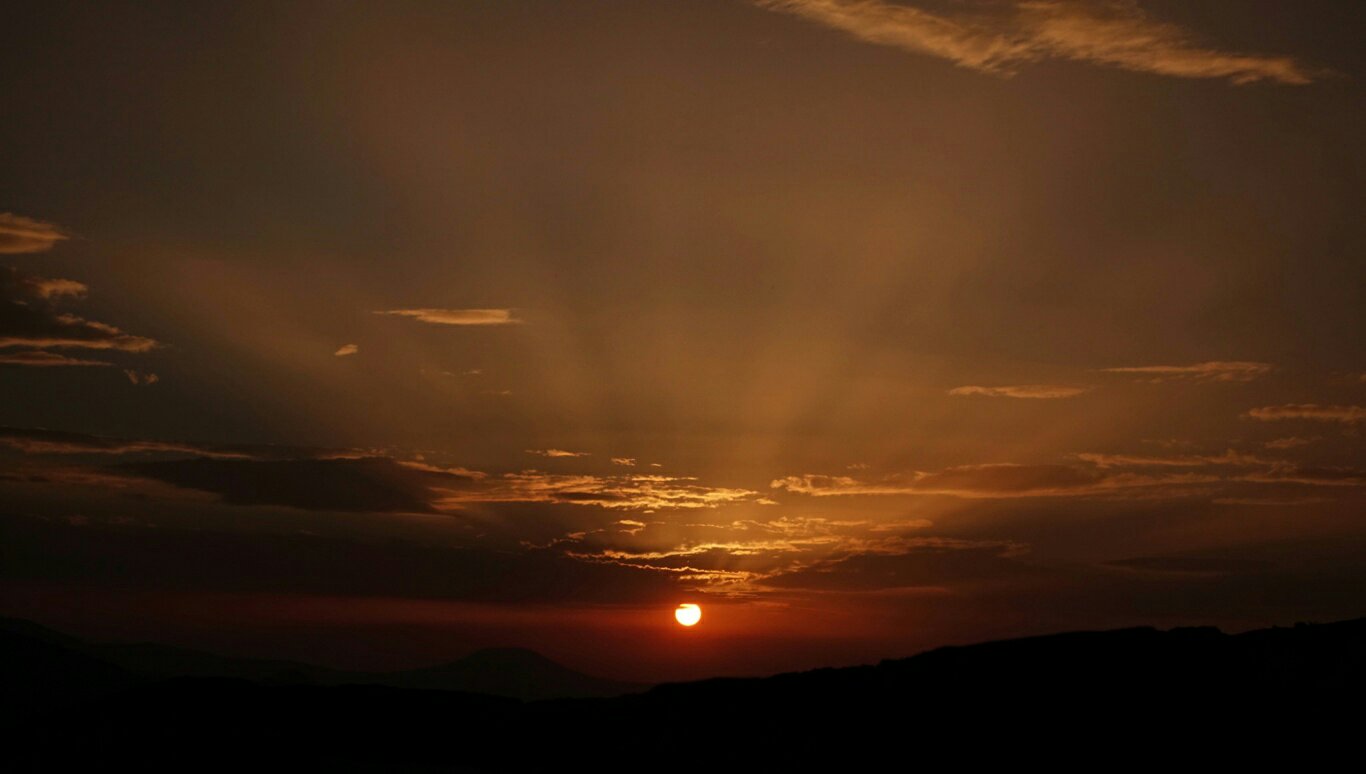 Sunset. Nearby wildfires have colored the sky. 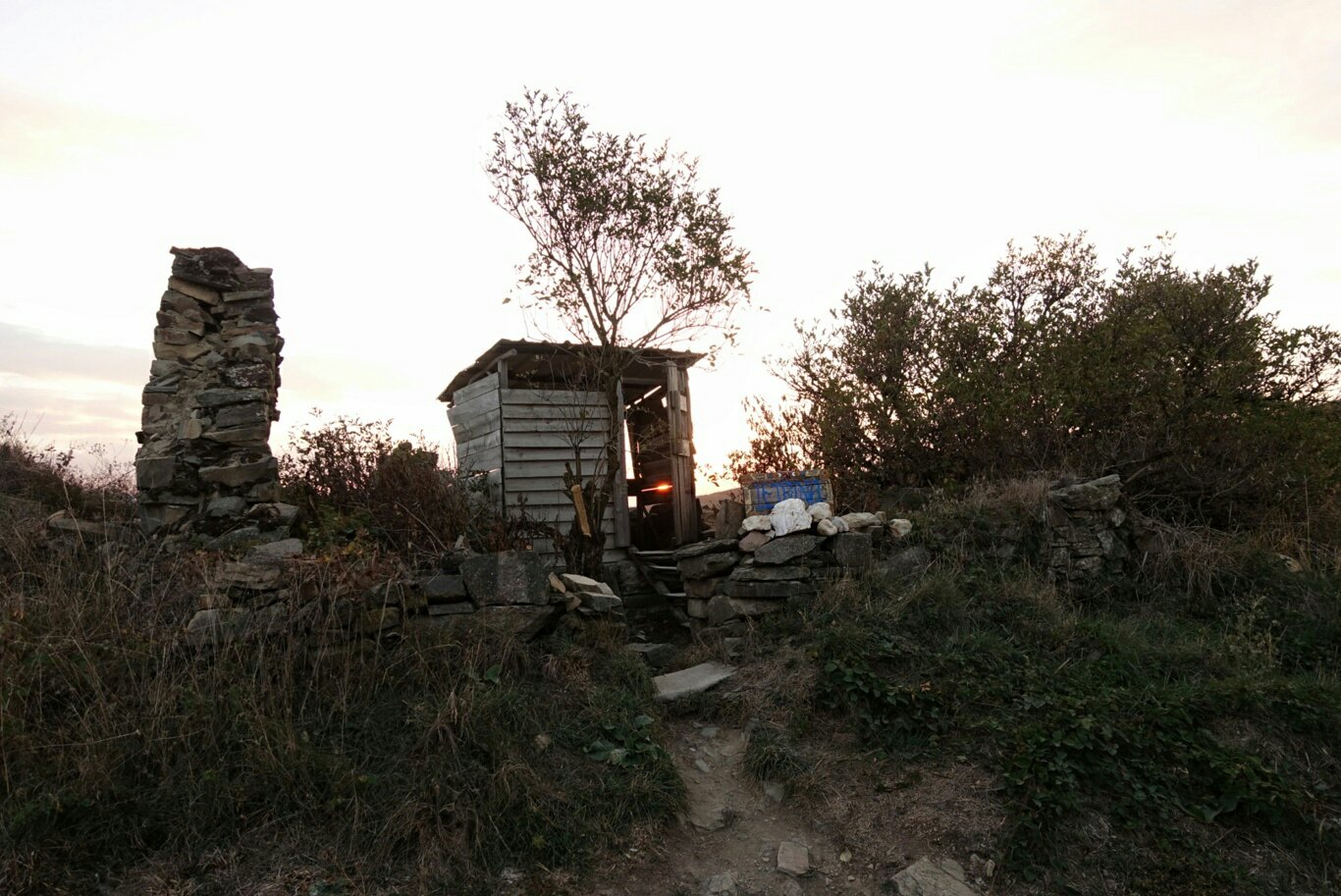 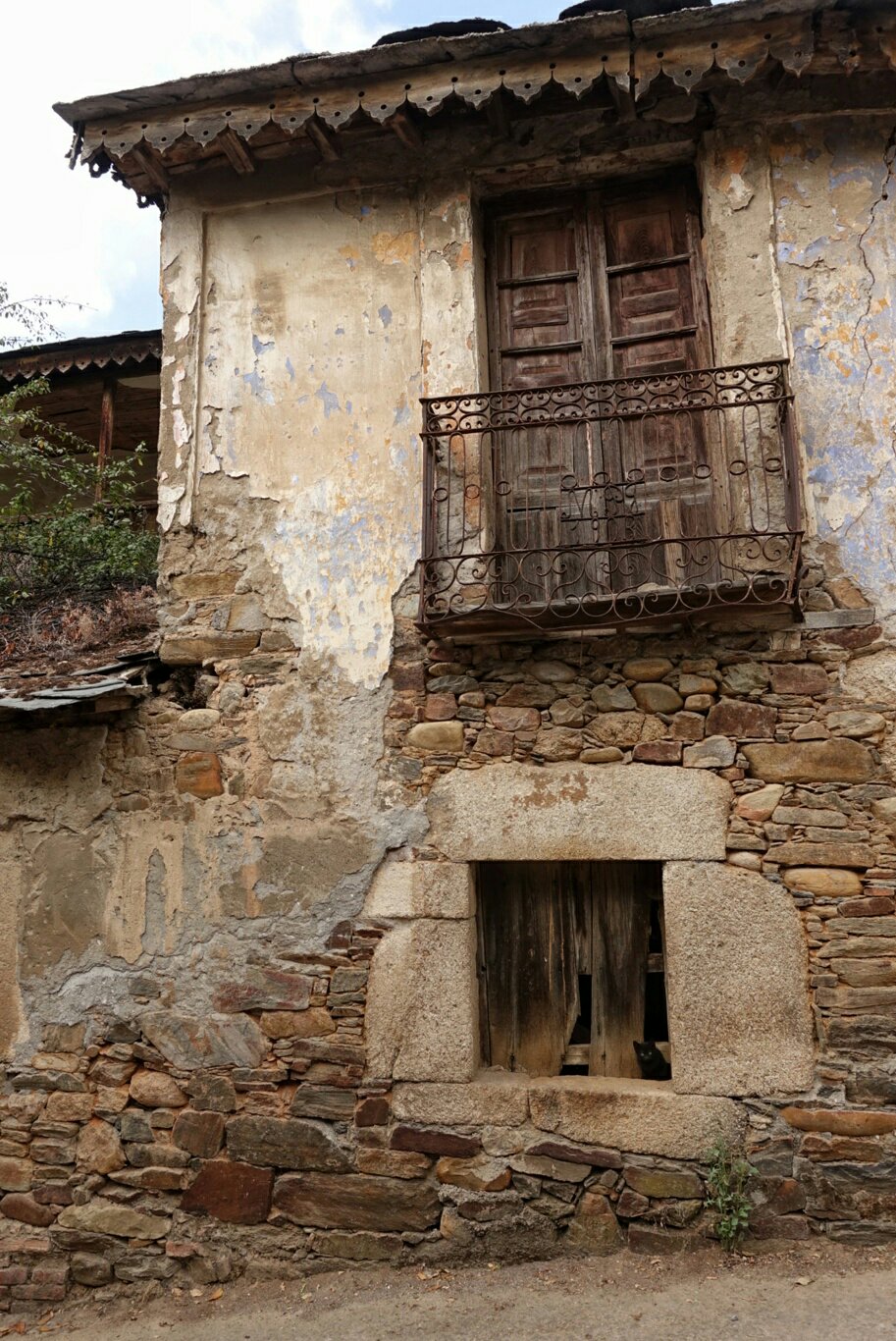 Approaching Ponferrada, the town where I am writing these words. If you look carefully, you can see a black kitten watching me from the lower window.