I caught a glimpse of the back of my neck while stepping into the shower last night. It’s as brown as a chestnut. My left forearm is starting to look like a hairy salami. I carry and even use sunscreen, but I always wait until the sun has been up for a while before I apply it. A Seattle couple I’ve gotten to know on the trail agreed that getting an even tan on the Camino is impossible, because the sun is on our left – in the south – all day long. To get any sun on the right halves of our bodies, we’d have to walk backwards to Santiago.

A couple of days ago, I was sitting in the square in front of León’s cathedral, munching on something to tide me over until restaurants started serving dinner at 8:00, when an intelligent young woman I’d met briefly at Castrojeriz sat down next to me. She had just bought herself a new daypack, which she displayed proudly, pointing out its clever features. Like many pilgrims, she is having her main pack shipped forward from spot to spot, to make the walking easier; she needed the daypack for snacks, water, sunscreen, stray bits of first-aid, and so on. After a few minutes of chatting, she invited me to join her and her Canadian friends for a drink, down at Plaza Mayor. “Sure!” I agreed, with what I hoped was a convincing display of bonhomie.

Her Canadian friends were about a dozen people, many of them retired, all of whom appeared to be delighted to see us. One of them decided that I look and sound just like Jimmy Stewart – a comparison that seems to me to be at exactly the midpoint in the Steve Buscemi – George Clooney continuum. It was as though I’d been complimented for my inoffensiveness.

Then somebody asked, “Where’s Ray?”

“Ray Sunshine?” asked one of the retirees, who then explained to me that this man’s name was “Ray,” but that they’d added “Sunshine” because he was happy all the time.

So, as the sun was setting in Plaza Mayor, I joined these people in three verses of “You Are My Sunshine.”

When they all decided to go off to find dinner someplace, I demurred. I needed to find a quiet spot where I could scrape off some of the wholesomeness.

I walked a lot of miles yesterday. I wanted to spend the night in Hospital de Órbigo, because it is the site of “one of the longest and best-preserved medieval bridges in Spain,” and also because it is relatively close to Astorga; I figured that an early start in Hospital de Órbigo this morning would give me more time in Astorga, which is a bona-fide tourist destination.

The walk to Hospital de Órbigo hinted at changes to come. Everything is just a little greener than it has been since leaving Burgos. Hills have reappeared, and the valleys between them are full of life. It’s a relief.

The bridge at Hospital de Órbigo is the site of a famous jousting tournament from 1434. I’ll quote the guidebook again:

A noble knight from León, Don Sueno de Quiñones, scorned by a beautiful lady, threw down the gauntlet to any knight who dared to pass as he undertook to defend the bridge (and presumably his honour) against all comers. Knights from all over Europe took up the challenge. Don Sueno successfully defended the bridge for a month, until the required 300 lances had been broken. Together with his trusted comrades, he then proceeded to Santiago to offer thanks for his freedom from the bonds of love and for his honour, now restored!

This is brainless and nonsensical in such a Don Quixote-y way that crossing the bridge made me feel like a character from bad fiction. Jimmy Stewart in Vertigo, maybe – except, instead of being afraid of heights, I’m afraid of lengths, like this long bridge! Yeah, that’s the ticket.

I toured Astorga’s Palacio Episcopal when I got here today – a neo-Gothic edifice designed by Antonio Gaudi. It’s spectacular and other-worldly, like all of Gaudi’s work, but it doesn’t rise to the inventiveness of the work I’ve seen in Barcelona, in which he seems to have generated an entirely new aesthetic vocabulary. It was a pleasure to spend some time with such a genius. Now, having checked into an albergue and readied this latest post, I think I’ll go back out into the streets. Places will be starting to open up after the siesta soon, and the sun won’t be setting for hours. Maybe I can work on my right-side tan. 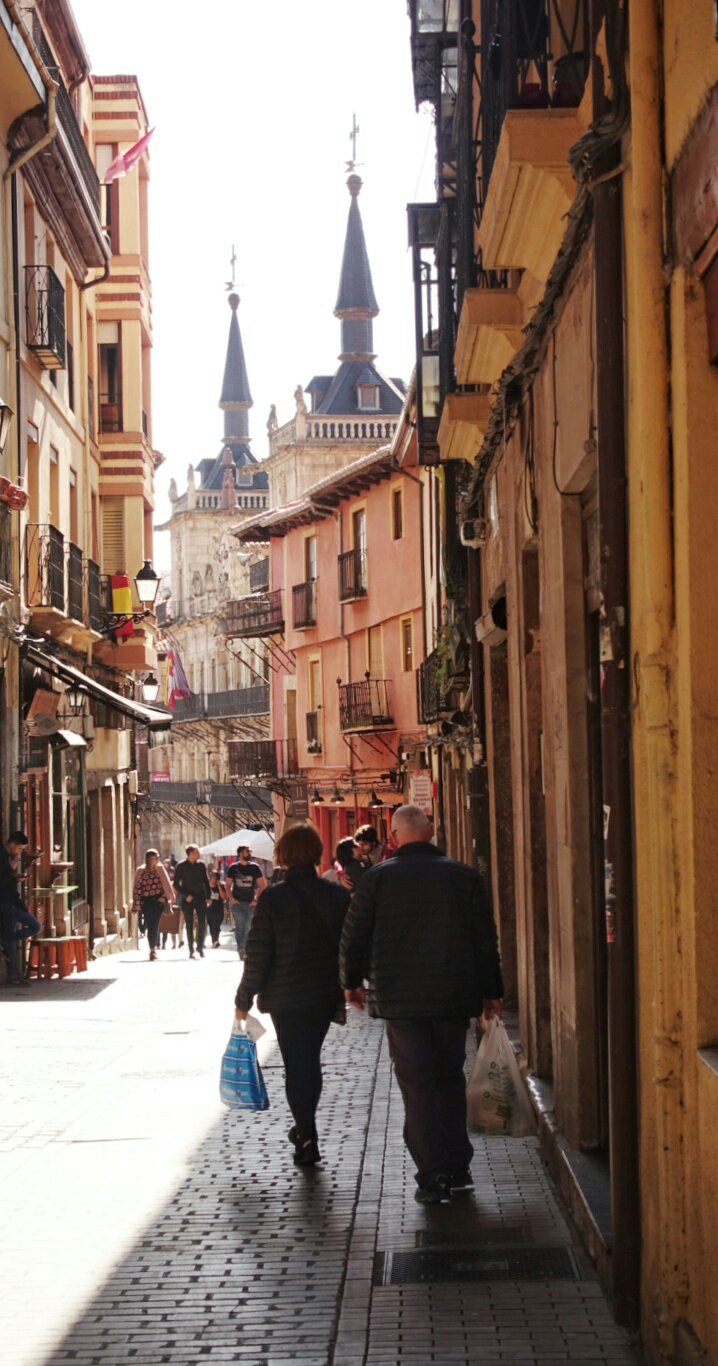 Peter and Ann, Australian pilgrims of my acquaintance, in León. 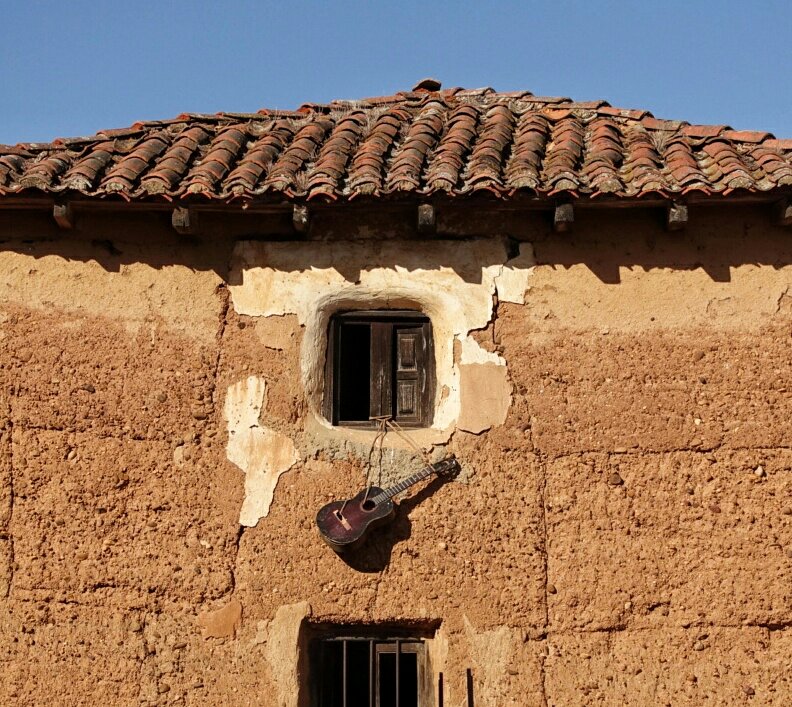 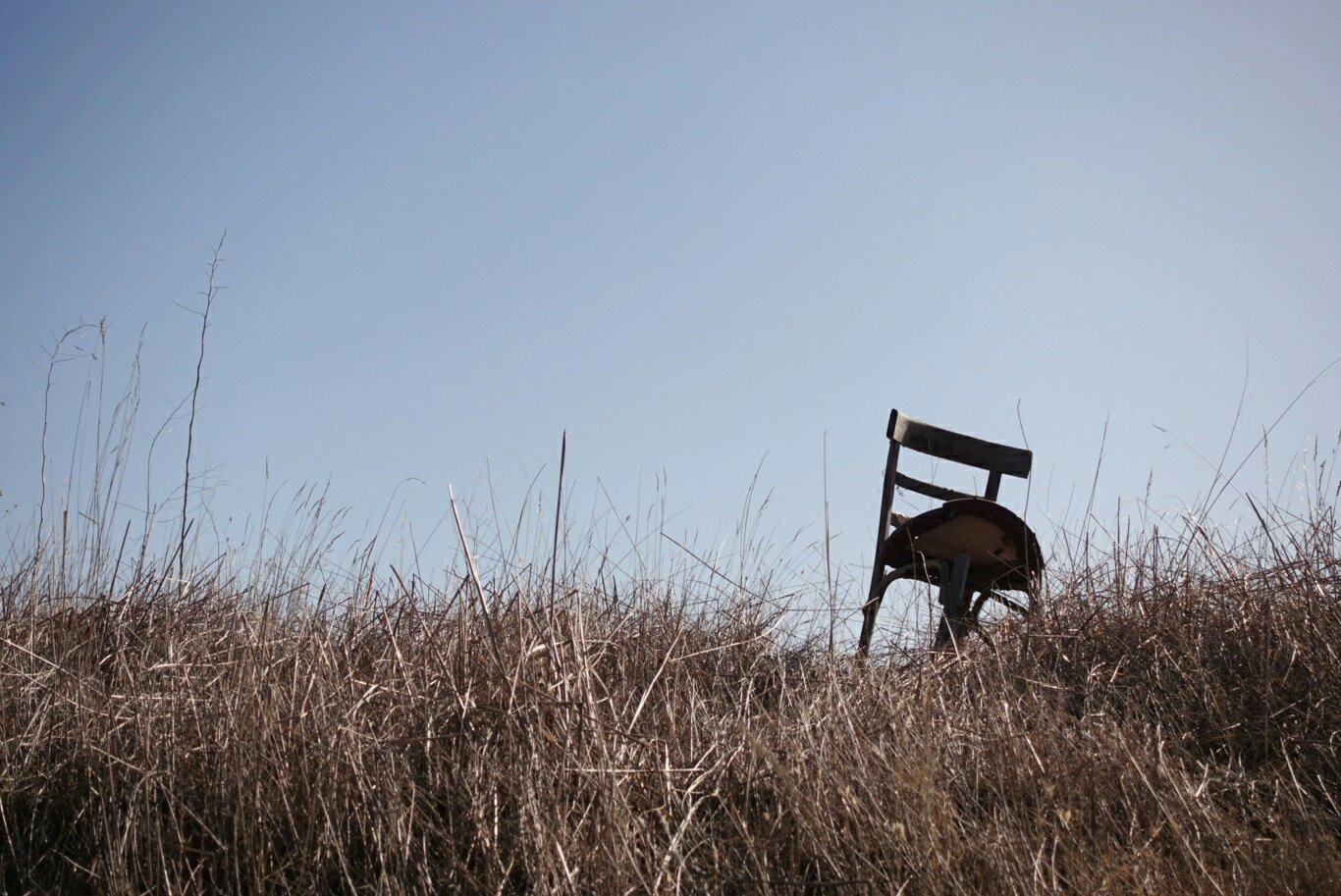 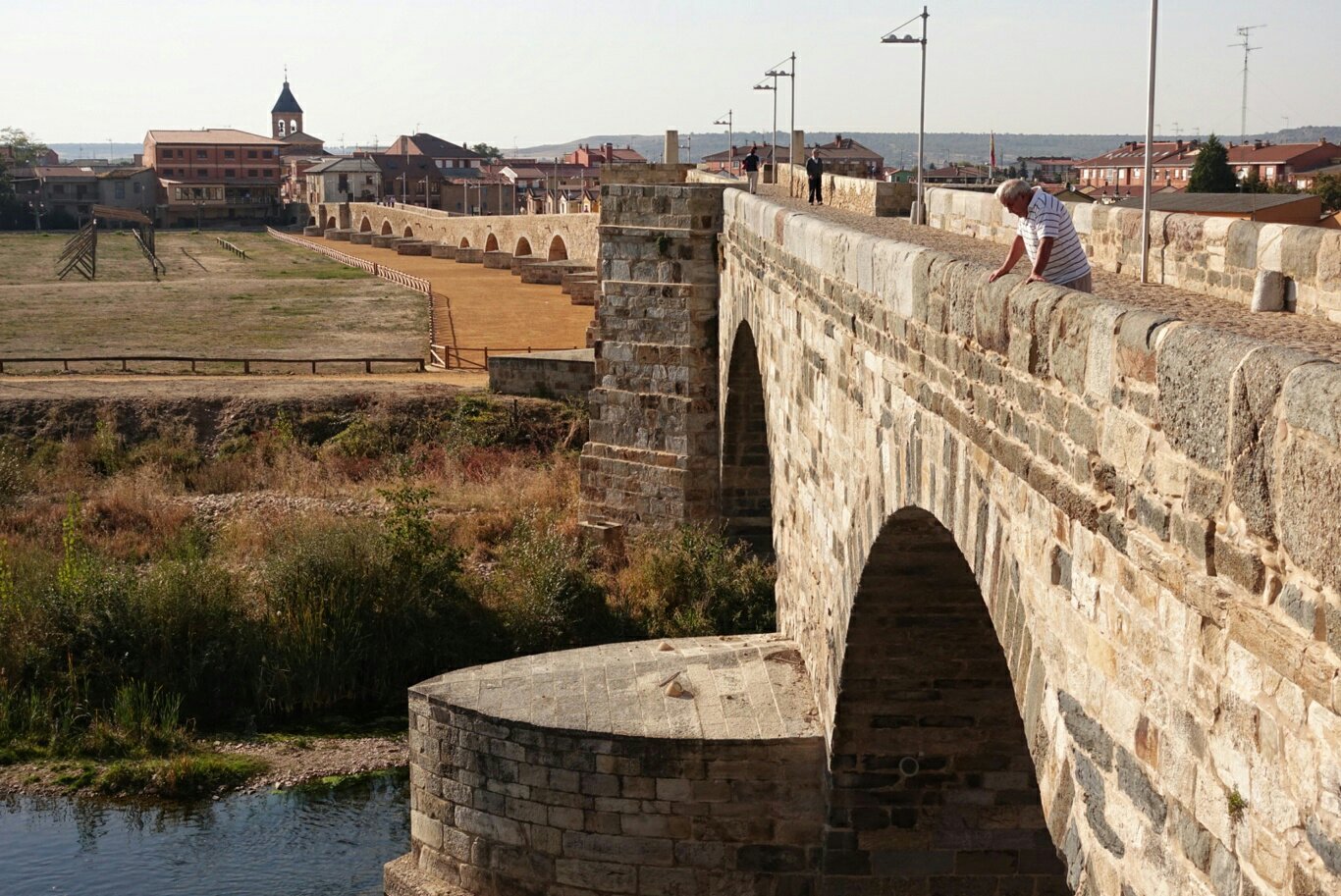 The bridge at Hospital de Órbigo. 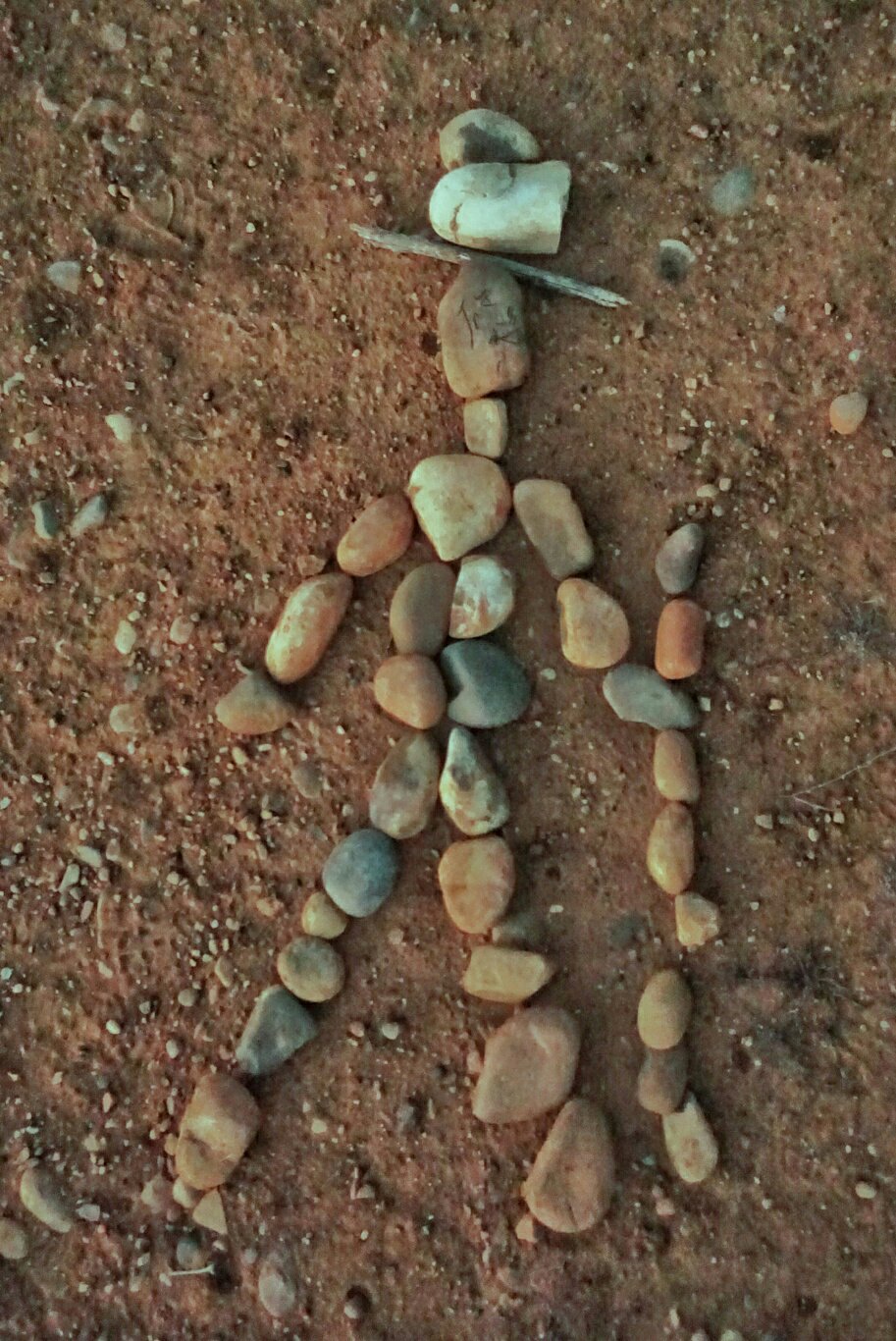 A peregrino that someone made from trailside rocks. 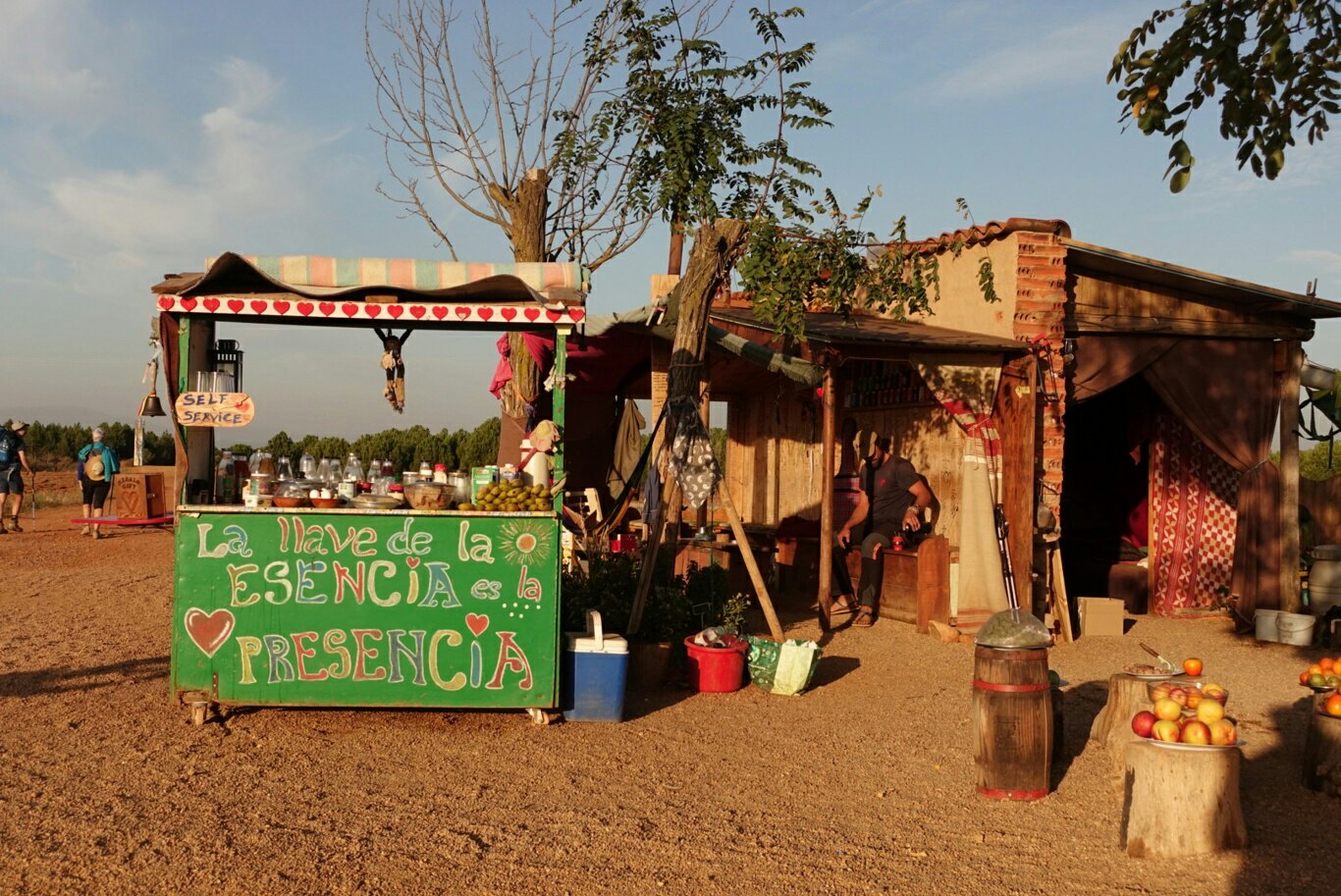 The key to the essence is the presence. This is one of those phrases whose nouns can be rearranged without changing the meaning at all. 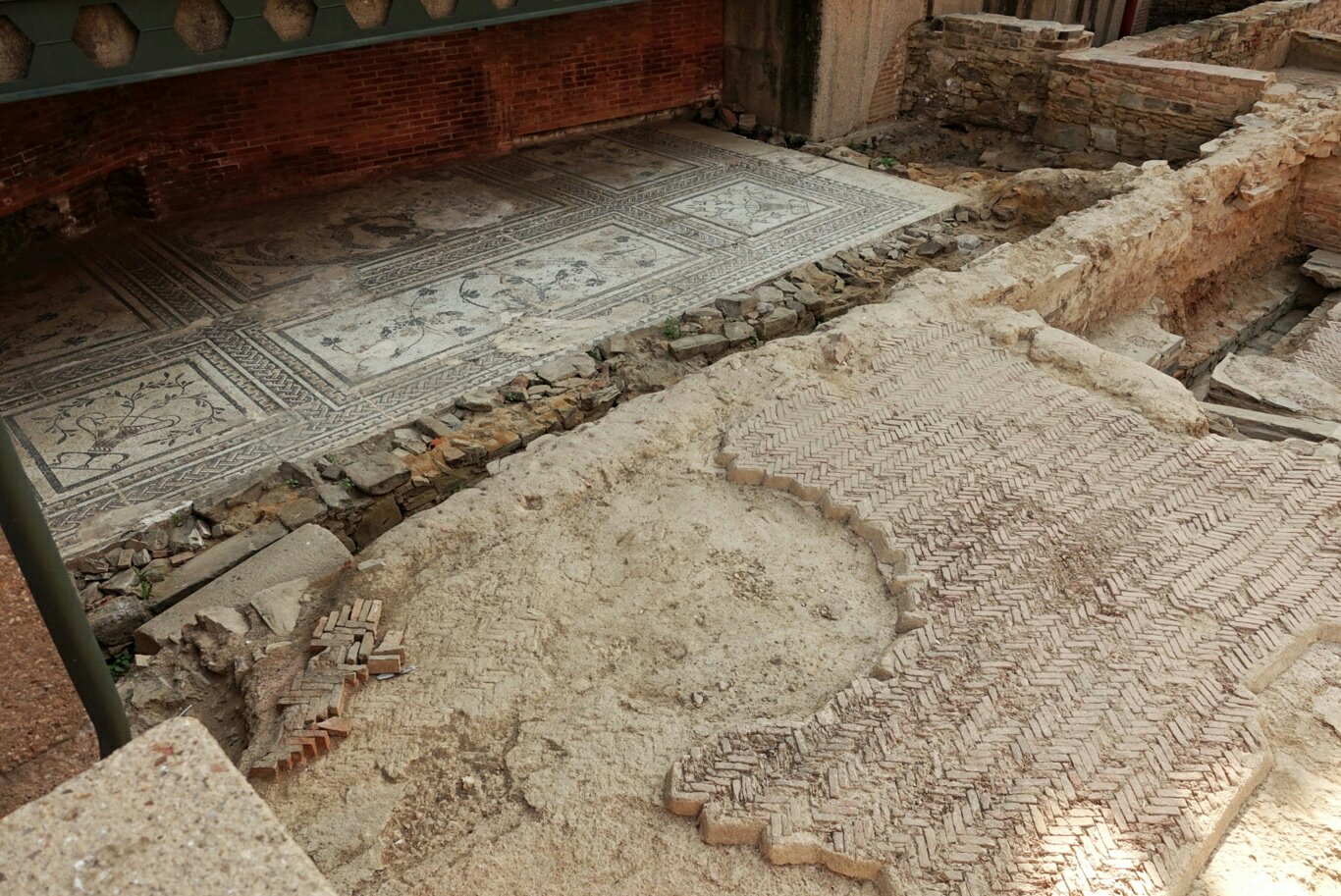 A Roman mosaic under the streets of Astorga. 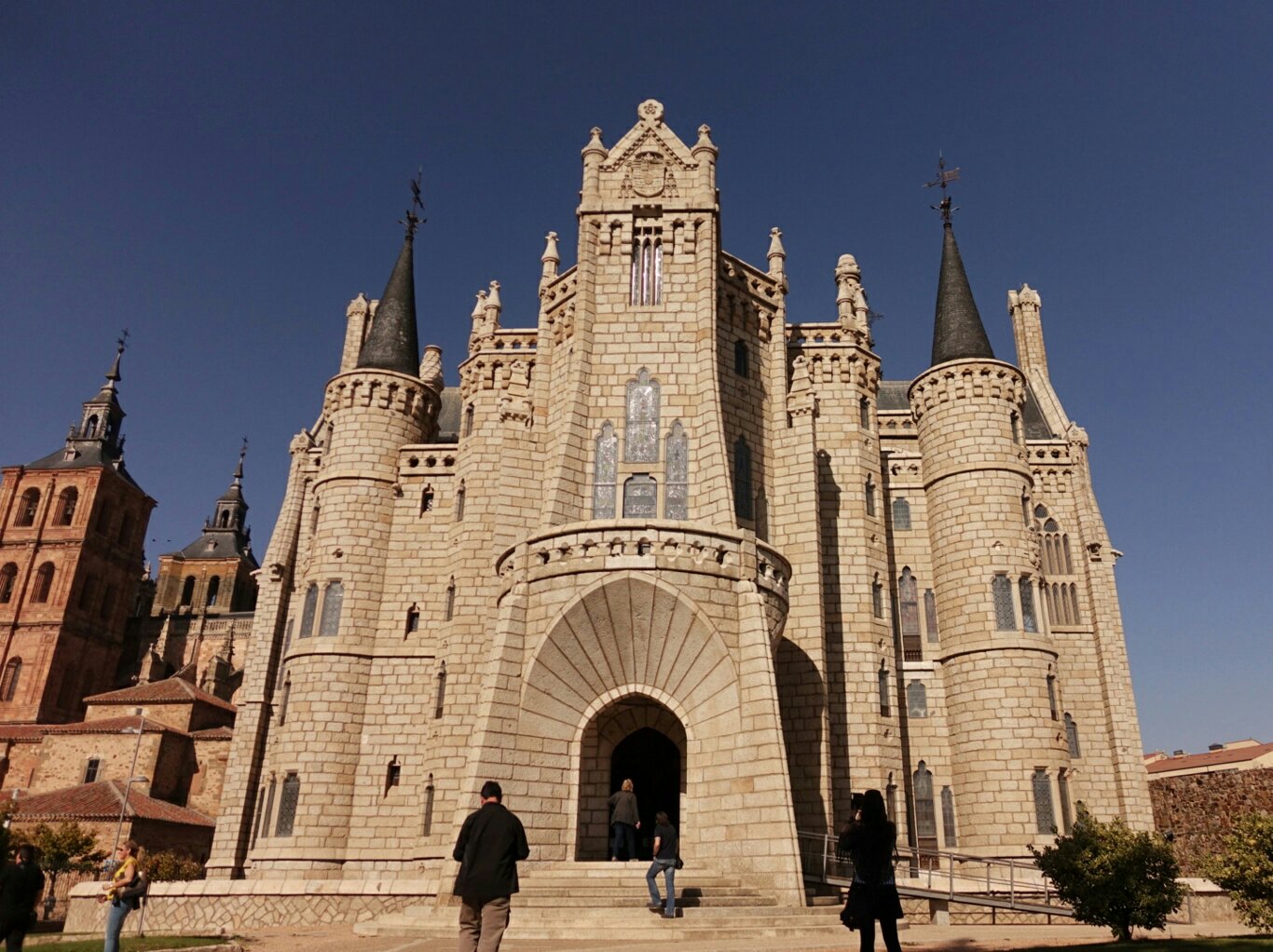