Oaxaca and the Equator

I named only one of the two cats who were my buddies at the apartment on Crespo, and that name came at the last second. I gave them the scritches they demanded, explaining to their complete unconcern that I might never see them again, and then walked around the corner, to a museum that my neighbor, Michelle, had mentioned to me, and which I had walked past many times without wondering what was going on inside its enormous ancient doors. This was the Museo de Arte Prehispanico de Mexico Rufino Tamayo, or the Museo Rufino Tamayo, for short. Tamayo was a famous artist in Oaxaca, Michelle had told me, who had amassed a large collection of pre-Columbian art and left it to the city. 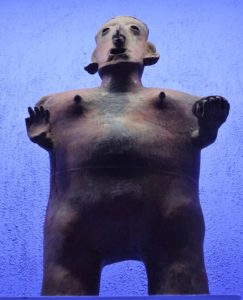 Most of the objects at Rufino Tamayo are dated roughly to 1000 B.C.

The collection is arranged by the artistic themes of the pieces, not by their provenance, age, or other scholarly concerns. The objects had an effect on me that I have experienced before, but not often enough – the effect of suddenly understanding the power of a previously unimagined aesthetic. This realization, that there is beauty in places where the viewer had never previously thought to look, is one of the most important functions of great art. I have seen pre-Columbian art before, but never like this. At the Museo Rufino Tamayo, I realized that the odd representations of human forms weren’t naive errors, or early struggles toward a more fulsome ability to render objects representationally; these weren’t like the kouroi of Archaic Greece, standing somewhat uncertainly astride Egyptian forms and the magnificent realism to come. The aesthetic on display at Rufino Tamayo is complete and stable, fully mature, like Assyrian bas reliefs or Haida thunderbird masks. Fantastic and realistic and strange and abstract and intimate. Thrilling.

I had a delicious and absurdly inexpensive three-course meal at Xunca Choco – my favorite little restaurant – and then walked the familiar streets, past many places where I had struggled to buy a loaf of bread, or forced myself to take a seat among people who seemed different from me, or stopped to admire the colors or the people or the age of a building. I ended up down at the zócalo, where I sat and watched the touts selling their snacks, and the lovers teasing each other, and young parents chasing their children. After a while, I checked my watch, and realized that I should go pack my bags. My flight was three hours away. 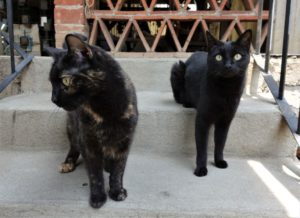 Nameless and Nipply, my two buddies at the apartment on Crespo.

I saw the black cat again when I returned to the apartment; the other one was off somewhere. He rolled onto his back and showed me his boy-nipples, daring me to put a finger on his belly so that he, like every cat who has made that offer for the last three-thousand years, could open a few of the veins in the outstretched hand.

I suppose I should have also named the other one.

I assume that some of you are interested in what this adventure is costing me. I have been diligent about keeping track of my expenses since I left the United States. Now that slightly more than a month has gone by, it is possible to make some rough approximations.

My cost of living in Oaxaca averaged about $78/day, in U.S. dollars. This figure includes all of my expenses, including the flight from San Francisco, my health insurance, and my Spanish lessons. Extrapolated over a year, living like this would cost me a little more than $28,000.

I expect my daily average to climb as I continue to travel; more airfare will add to the burden, and living like a tourist is more expensive than living something like a local – and by “living something like a local” I mean doing some cooking, spending money on buses and taxis only occasionally, and not feeling compelled to splurge on restaurants or other special indulgences in a brand-new, never-to-be-seen-again location. It will be relatively expensive to be a tourist in Quito and Baños (a little town between Quito and Cuenca), but I’ll settle back into a less-expensive way of life soon, when I arrive in Cuenca.

Here is a pie chart that breaks down my Oaxacan daily expenses by category: 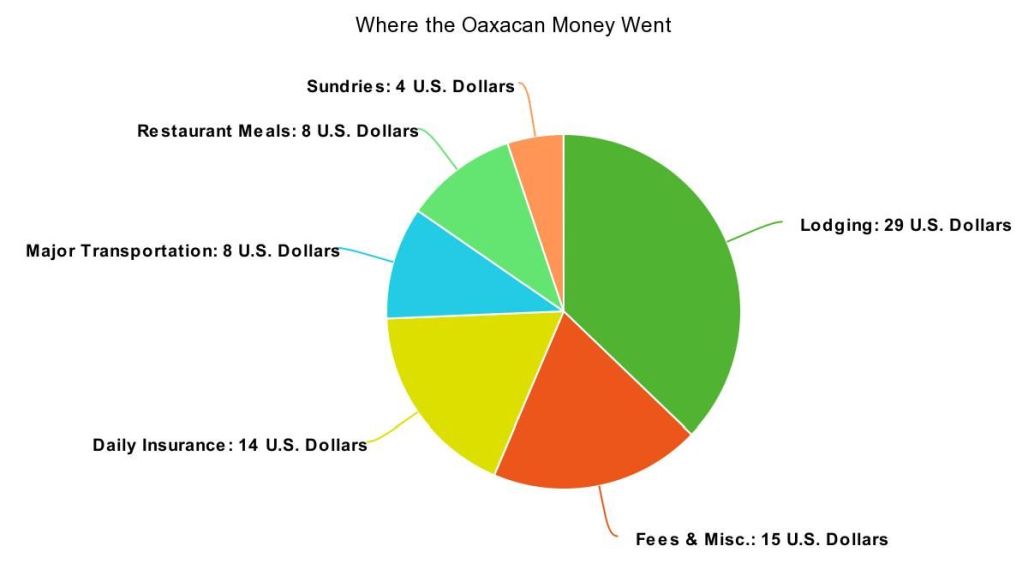 Sundries are groceries and other odds & ends – consumables.
Lodging was my single biggest expense. It is possible to rent an apartment on a long-term basis for significantly less than this, but, as a traveler, $29/night is not too bad.
Fees and Misc. include the Spanish classes I was taking, plus museum-entrance fees and occasional taxis.
Daily Insurance is what I’m spending for health insurance. This category also includes the pittance I’m spending to keep my car insured, under a tarp in Seattle.
Major Transportation is the airfare to get from San Francisco to Oaxaca, plus ground transportation from the airport.
Restaurant Meals probably seem cheap to you, at $8/day. This seems cheap to me, at any rate.

The first things any Norte Americano does when visiting Quito are:

Many of the items on this list are true.

I was then placed on a plank, which could be easily tilted up into a large bath of water. — They then lathered my face & mouth with pitch and paint, & scraped some of it off with a piece of roughened iron hoop. —a signal being given I was tilted head over heels into the water, where two men received me & ducked me. —at last, glad enough, I escaped. — most of the others were treated much worse, dirty mixtures being put in their mouths & rubbed on their faces. — The whole ship was a shower bath: & water was flying about in every direction: of course not one person, even the Captain, got clear of being wet through.

And here is one of Patrick O’Brian’s descriptions of the event, in The Mauritius Command:

But they crossed the line itself in style, with studdingsails aloft and alow, and with more than the usual merriment, for when they reduced sail to let Neptune come aboard, accompanied by an outrageously lewd Amphitrite and Badger-Bag, he found no less than a hundred and twenty-three souls who had to be made free of the equator by being lathered with rancid grease – tar was forbidden, being in short supply – and shaved with a piece of barrel-hoop before being ducked.

I am a tourist in the old part of Quito; my next post will have to do with museums, churches, and restaurants. I plan to spend a few days in Baños de Agua Santa, a little town halfway between Quito and Cuenca, during the next week. It’s likely that I’ll be writing the next post from Baños, so you should also expect reflections on zip-lines, white-water kayaking, and natural hot tubs. Bungee-jumping and sacred art. Finding a theme is going to be tricky.

For more photos from my last days in Oaxaca – and an action shot of a toilet – see Oaxaca: Last Days.