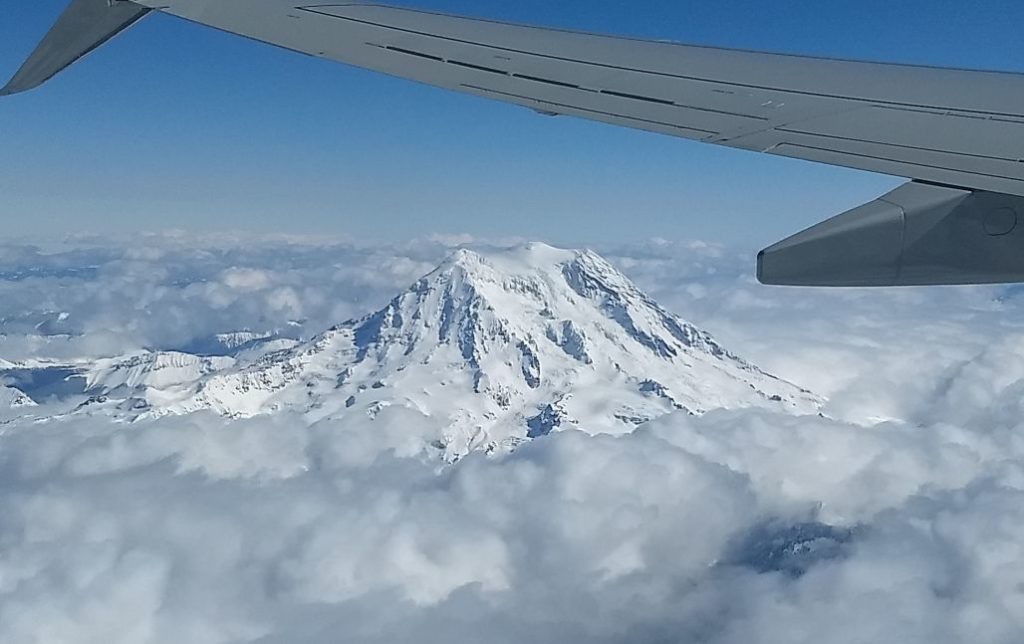 My last glimpse of Mt. Rainier for a while.

I left Seattle on March 13, flying to San Diego to keep house for my friend, Frans, while he recuperated from hip-replacement surgery. After a few weeks, when he was able to hobble around in an encouraging way, I flew to the Bay Area, where I rented an Airbnb in Palo Alto and spent a few days with my son and daughter. On the evening of Monday, April 8, I flew from San Francisco to Oaxaca City, where I moved into another Airbnb and began the process of making a temporary home. I’m finally out. 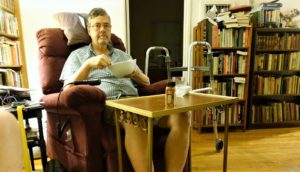 Frans recuperates in his motorized recliner, gamely working away at my latest meal.

Being in San Diego with Frans was pleasant, but it didn’t feel like being out. I went for long walks every day, exploring the canyons that furrow the plateau on which his University Heights neighborhood is perched. I took distant pictures of the wild parrots, I tickled a lizard, I visited the zoo and a good museum, I ate a loquat right off the tree – it was much better than the bedpan-changing, mopping-the-fevered-brow-of-my-delirious-old-buddy visit that I’d imagined. Frans and I ate my sub-mediocre cooking, listened to music, and gave each other the good-natured grief that is the cornerstone of practically every male friendship. It was good, but Frans’s apartment was nothing like my place, and I was not at all the master of my own time. San Diego is warm and prosperous and much too easy. When Frans was able to get up and down the flight of stairs that leads to his apartment, I was ready to leave. 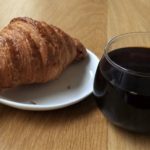 On my first morning in Palo Alto, I found a cafe in an old, repurposed movie theater, where I ordered a cup of drip coffee and a croissant. There was some confusion about how I was expected to interact with their touch-sensitive payment system, and how I was going to get my order, and whether I was allowed to sit down in the separate area where chairs were apparently being rented by the hour by serious young people with laptops and which was being guarded by a skinny gender-fluid person with an unnecessarily ambitious hairdo. The bill was $10.00, including the tip. I ate my precious breakfast in the courtyard while Teslas swept silently by on University Avenue.

Sam and Laura and I had Burmese food on Friday night. On Saturday, Sam and I walked around on the Coyote Hills near Fremont, and then the three of us went to the de Young museum, where various forms of ID and good luck got all of us in for free. After bowls of Pho, we stopped at a co-op grocery store at the north end of the Mission District, where Laura spent $275 on 35 pounds of local unfiltered olive oil for her group house. At one point Laura told me that I could look around in the store while she shopped, if I liked, and I said, “That’s okay. I’ve seen grocery stores before,” drawing such a shocked look from a bearded young man nearby that I felt compelled to add, “Never one as splendid as this, of course.” He showed me the absurdly expensive thing he was buying and explained very earnestly that one simply couldn’t find such a thing elsewhere, no matter how hard one looked. And then we went to the south end of the Mission, where an amorphous art fair didn’t materialize, but which turned into a good excuse to buy ice cream. (Sam’s flavor was “Secret Breakfast” – bourbon and corn flakes.)

On Sunday afternoon we visited a bar where Eric Douglass, an old friend of Laura’s and, now, of mine, was having his 31st birthday party. It was a crowd of very smart young people and also me. The deck behind the bar adjoined another bar, whose bass-heavy sound system was producing something that seemed to me more like a well-meaning assault than music – like a kind of CPR that, even if it were to somehow save you, might be only marginally better than cardiac arrest. After that, many of us decamped to a Muslim Chinese restaurant that Diane, the cephalopodiastical post-doc, knew about; nine of us crammed ourselves around a table where the food was mounded up before us in pleasing excess. 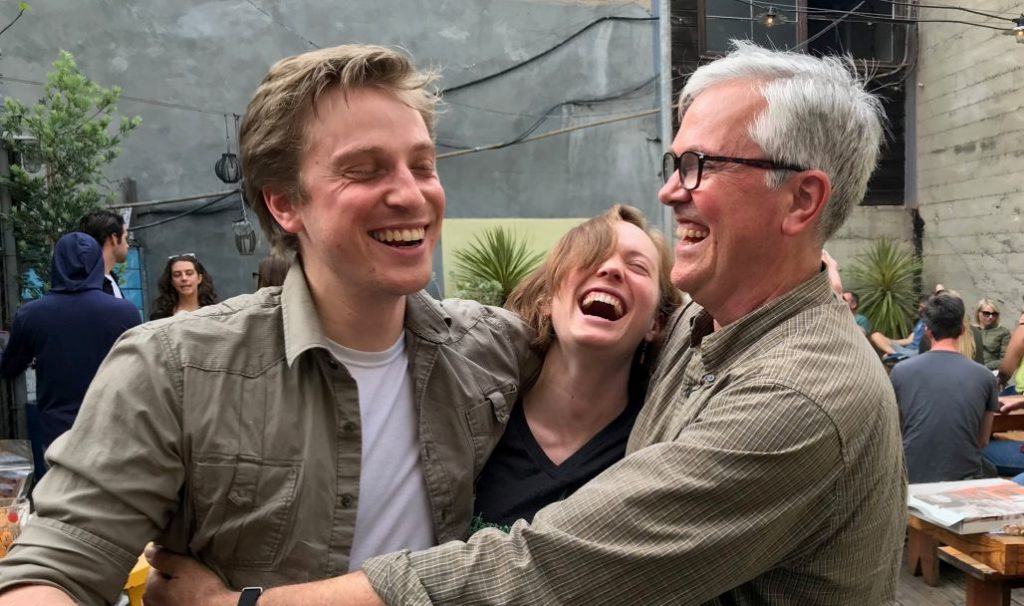 On the deck with Sam and Laura

Then I hugged my kids in the street in front of Laura’s house and walked back to my Airbnb. God knows when I’ll see them again.

More photographs from the Bay Area.

I spent much of the day on Monday walking through San Francisco, doing a big loop that took me counterclockwise through the Financial District, Chinatown, Little Italy, up Lombard Street to Russian Hill, and then south through the sad and appalling and frightening Tenderloin District. I got to the airport at 8:00 p.m., three hours before my flight was due to leave, mostly because I had nowhere else to go. I changed planes in Mexico City, at an hour poised between night and morning, and arrived in Oaxaca at 8:00 on Monday morning. 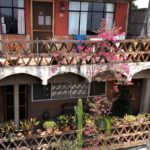 And now it’s Thursday evening. I had the usual misadventures with finding a way to contact my Airbnb host, with changing money, and with that first-day exhaustion that feels like a species of despair, but now those problems are behind me. My third-floor apartment opens up onto a balcony with a view south over the city, with bougainvillea twining around the railing. I have met five of the expats with whom I share this apartment complex, all of them friendly and helpful. I bought a one-month membership at the Oaxaca Lending Library, a local resource for expats, whose enormous collection of English-language books made me laugh with delight; while there, I signed up for a tour that will take me to a Palm Sunday procession at a nearby village this weekend, and got some good leads on Spanish classes. I have a loaf of whole wheat bread here at the apartment that contains bits of husk and straw. Last night, my sumptuous dinner cost me four U.S. dollars, including the tip. A beetle the size of a squash ball tried to batter through my screen door this morning. The walls are yellow and orange. The air is warm. It’s heaven. 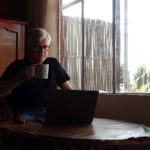 Me in my apartment

I’m out. Out of America, yes, and out of my old routine, but also out of this last, depressing period of my life. It has been a tough couple of years, but all that is over now. I know that I am not done with grief and hardship — that everyone’s life is one damn thing after another, until the last damn thing brings it all to a close — but right now I’m in a pristine little apartment in a city I had hardly heard of a few months ago, and I have practically no idea at all what might happen next. For now, and for a while, some unpredictable and indeterminate and precious while, I’m free.

More photographs from my first days in Mexico.