I accidentally put a thumb through the side of one of my few pairs of underpants. This seems like a bad omen, although I am not at all sure what it portends. I may have read an old Spanish saying, Es un hombre sabio que entiende completamente las aperturas en su ropa interior. Or I may have made that up.

There is only one albergue in the tiny village of San Juan de Ortega, which is a 25-kilometer hike from the city of Burgos. This albergue is built into an ancient monastery; to get to the WC, I needed to go out into the colonnaded central courtyard, whose red stone sobriety was only slightly marred by all the washing that had been hung out to dry.

After finding a bunk and changing my clothes, I visited the village’s only café, where I asked the man behind the counter if he could heat up my empanada. “Caliente?!” he roared. “Nonono. Si caliente…” he mimed something growing to the size of a basketball, puffing out his cheeks. “Entonces,” he intoned, and then mimed a basketball squelching down to the size of an overripe mango, complete with a long farting sound. I took it at room temperature, you can be sure.

Attending mass wasn’t exactly a prerequisite for getting dinner at the albergue, but it might as well have been. Since the dinner served by the albergue is the only option in San Juan de Ortega – and since I was sure the mass would be interesting – I was happy to go.

Every word was in Spanish, of course, so I didn’t catch much beyond the concluding “Buen Camino,” and the service lacked the censer swinging and monotonous droning that I’d been hoping for. At one point, a Spanish-speaking pilgrim was supposed to read the next part of the service, but she had lost her place in the printed program; the priest stepped forward and, while he was guiding her to the right spot, someone started booming out the words from the back. It was the “don’t heat an empanada, for the love of God” guy from the café. The priest returned to his place, giving the woman who had lost her chance a smile and an apologetic shrug. Often being right is less useful than being patient.

During the quiet parts of the service I had started to enjoy some self-pity about my tinnitus, but then realized that the man standing next to me was wearing a hearing aid that appeared to weigh half a pound and which featured a plug that entered his skull slightly behind his ear.

Despite my nearly complete incomprehension, I was moved by the matter-of-fact performance of a ritual that everyone there had been through thousands of times, and, despite this casual familiarity, the unmistakable seriousness of it – the attention of the congregants and the concentration of the priest. Everything mattered.

The walk to Burgos started more than an hour before sunup. It threatened to rain a few times, but the occasional drops never even became a drizzle. It took a few hours to leave the uninhabited forest in which San Juan de Ortega is a kind of oasis. For 12 kilometers or so, this village is the only sign that anyone has ever lived along the Camino. This was probably a dangerous stretch of road, back in the Middle Ages; people must have traveled in groups as protection against thieves.

I passed a young couple with whom I had shared a room in Belorado: Alan, from Dublin, and a Swedish woman whose name may be Angelica or Evangeline. We exchanged a few pleasantries before I left them behind.

When I arrived in Burgos, I snagged the first cheap hotel I could find and then went for a walk through the old quarter. I was having a beer at a streetside café when – there they were! Alan and Evangelica! We exchanged a few pleasantries before I went off to tour the cathedral. A few hours later, I found a “cheap eats” restaurant that was well reviewed on TripAdvisor, climbed the stairs to the packed dining room, and – there they were again! This time, though, they hadn’t seen me, and I was plumb out of pleasantries, so I made my escape. My nightly attempts to find food are always stressful experiences for me – the last thing I needed was the added stress of having to be friendly. With people.

There is obviously something wrong with me.

On my way to Burgos from San Juan de Ortega, I walked through the little village of Atapuerca, which is famous for the remains of hominids that have been found in nearby caves. Today I toured the excellent Museum of Human Evolution here in Burgos, where the Atapuerca finds are discussed in clear, detailed English, and where the fossils themselves are shiver-inducing. I had an excellent lunch in the restaurant I fled from last night, and now I am catching up on this narrative while the city readies itself for its nightly revelries.

Tomorrow I’m setting off across the meseta – Spain’s high central plateau. It will be eight days with little shade and little to look at, I hear, before the next big town. I expect it to be challenging, but I’m also eager to start walking again.

Say a prayer for my underpants.

The door to San Juan de Ortega’s albergue is at the left side of this photo. 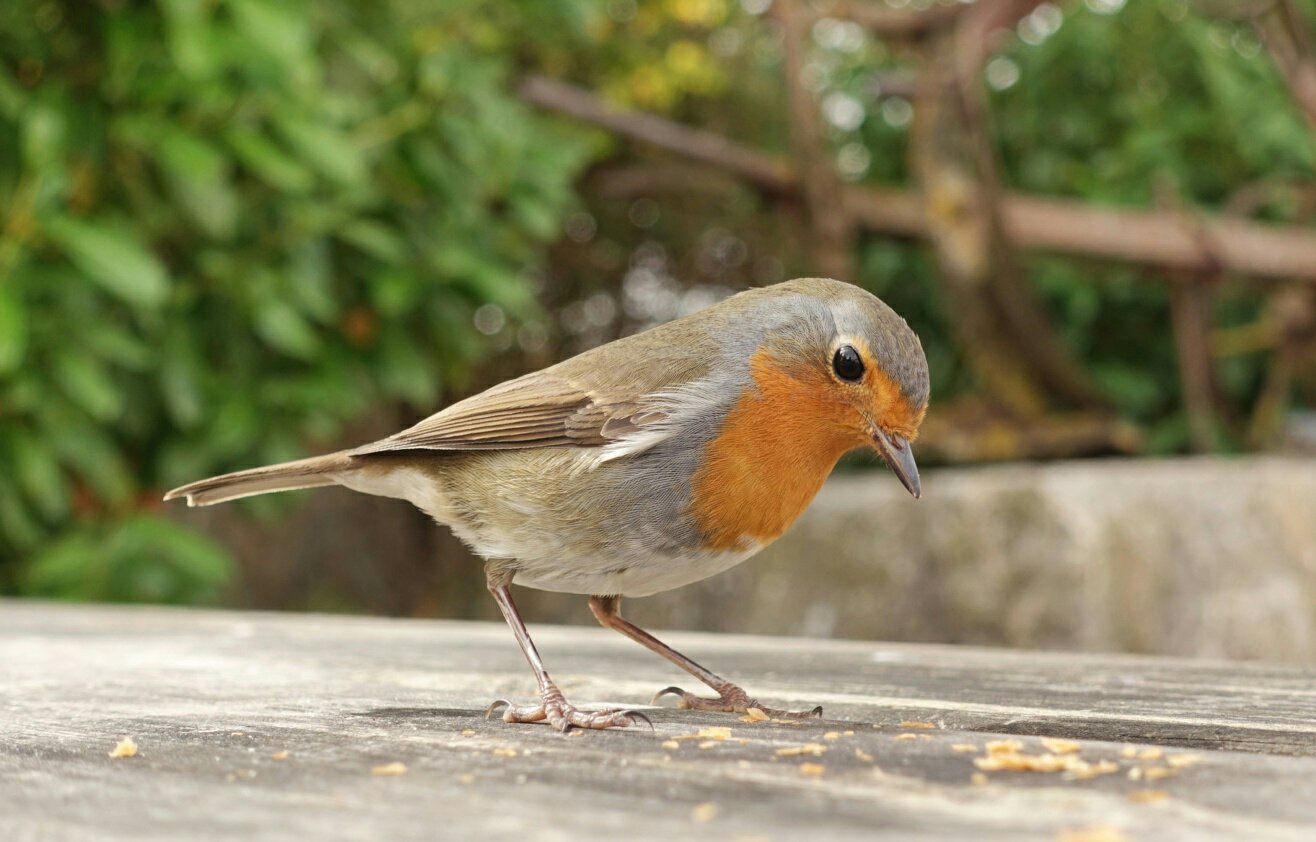 This visitor helped me with my empanada crumbs. 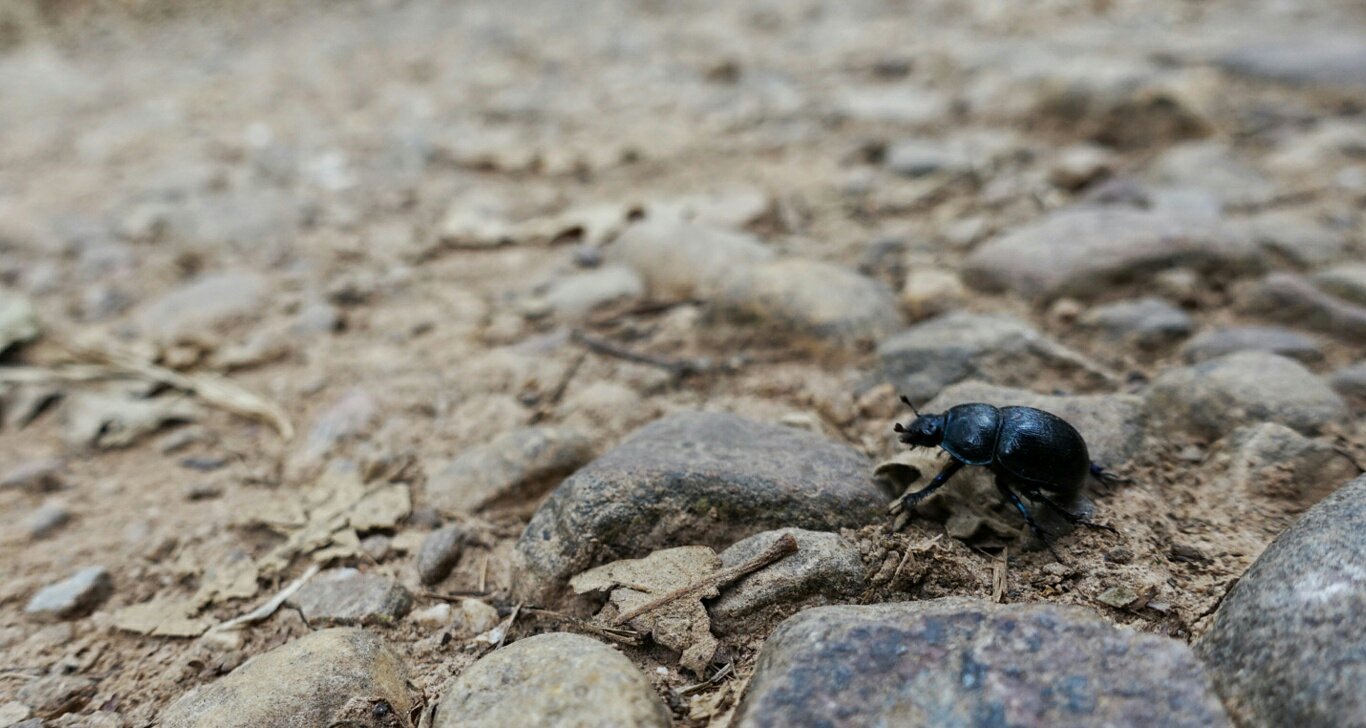 I flipped this beetle onto his legs when I found him upsidedown on the trail. He got back to work without a word of thanks. 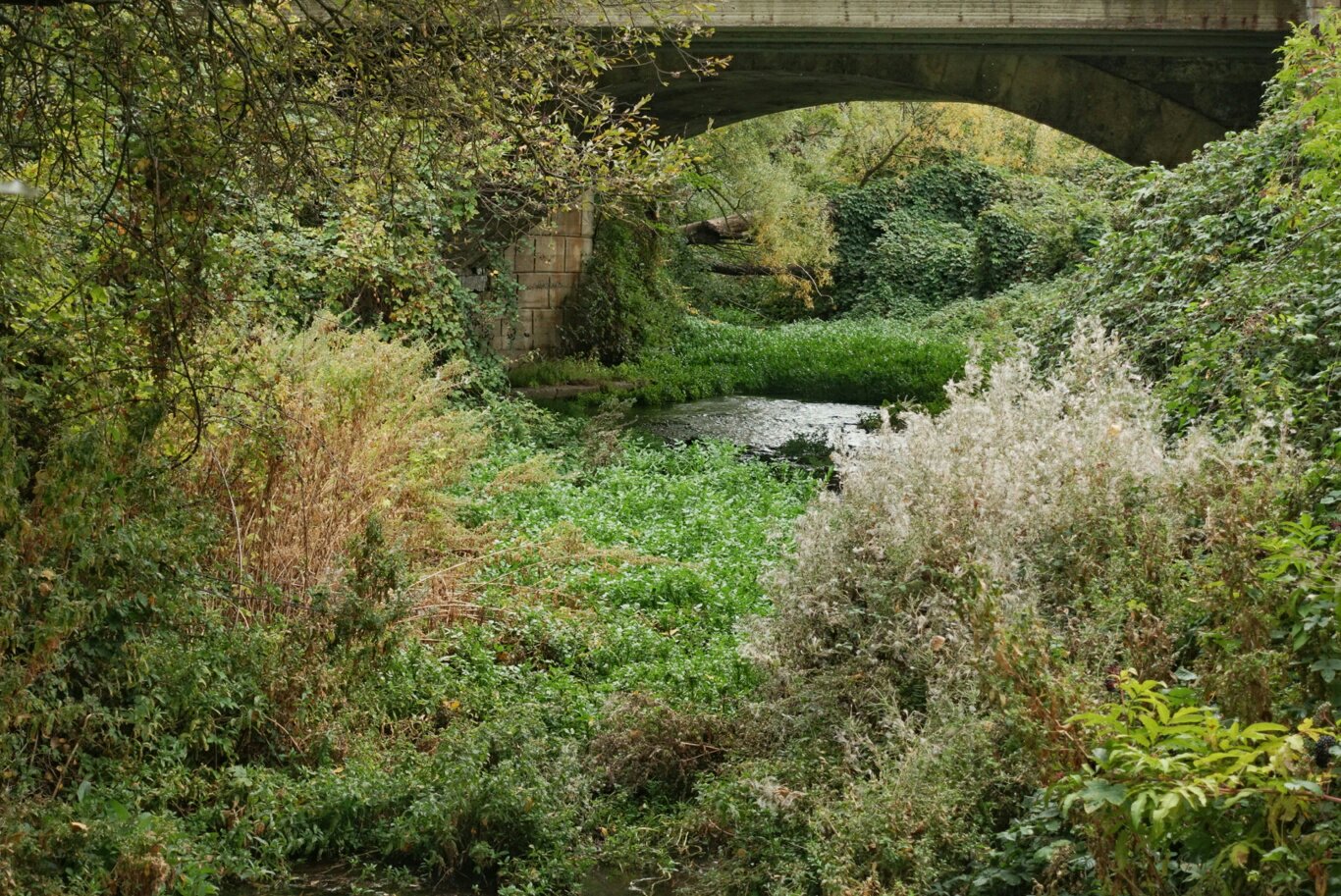 A sylvan scene outside Burgos. 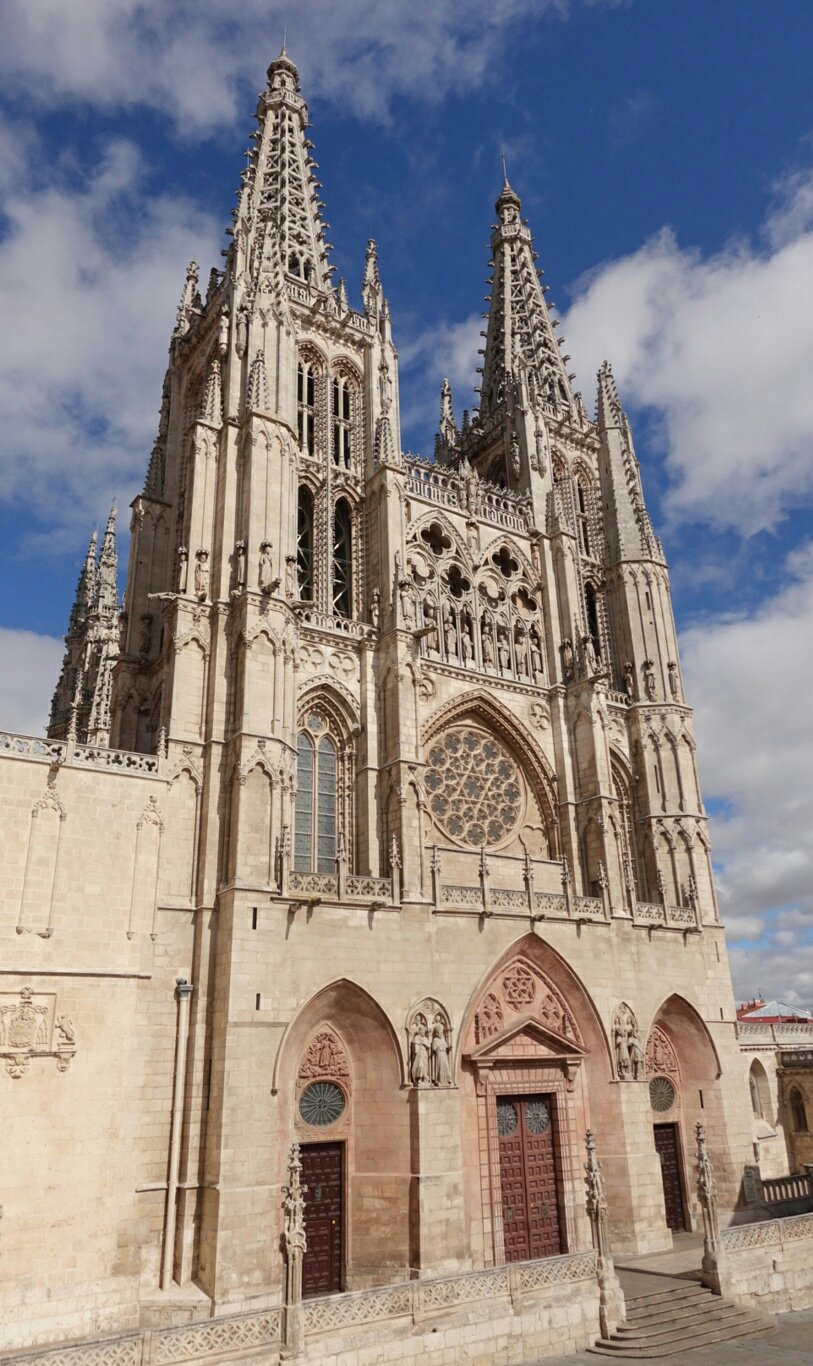 The cathedral at Burgos. 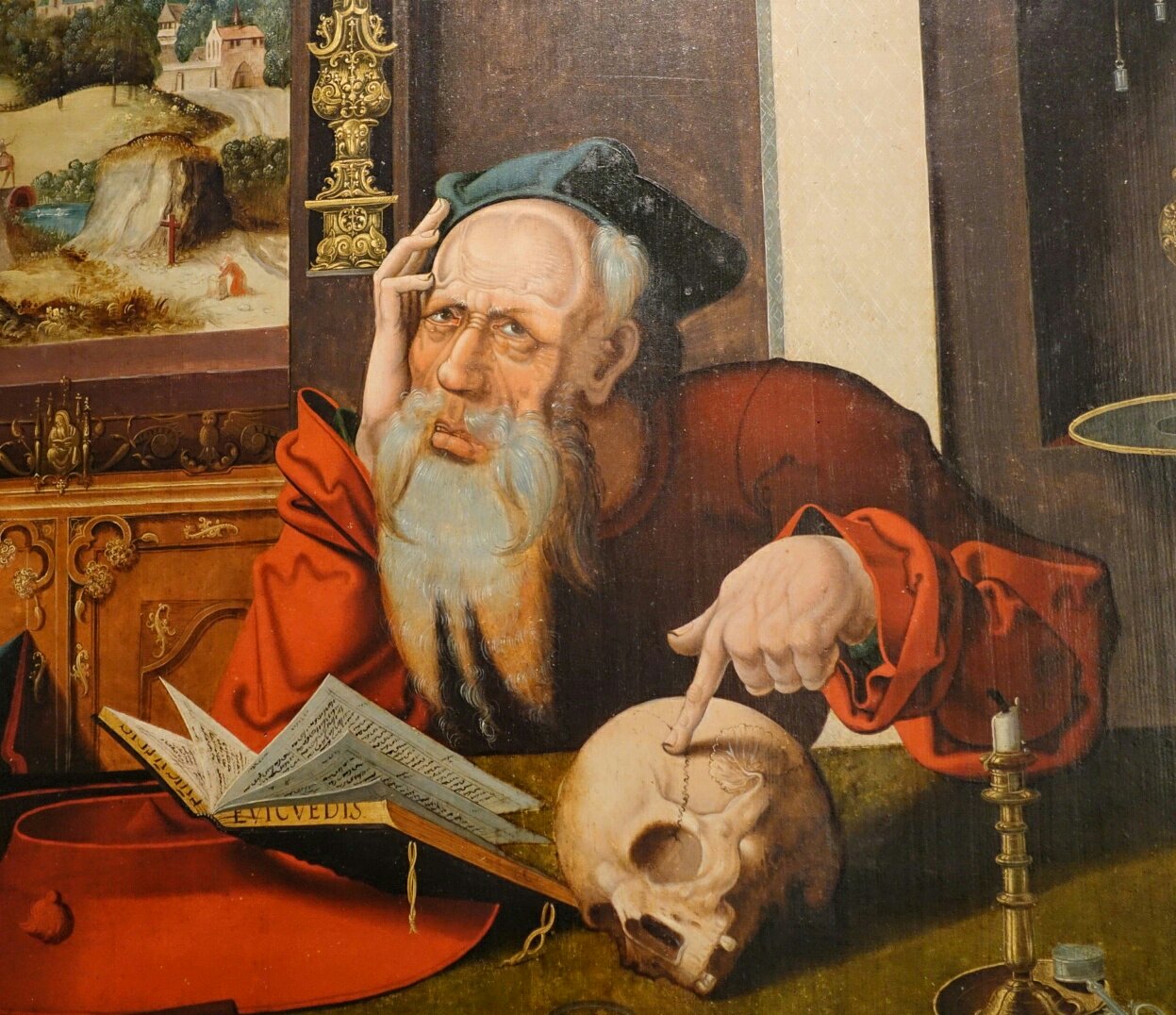 I am not sure what Saint Jeronimo is worried about here, but I think he might want to take a break. 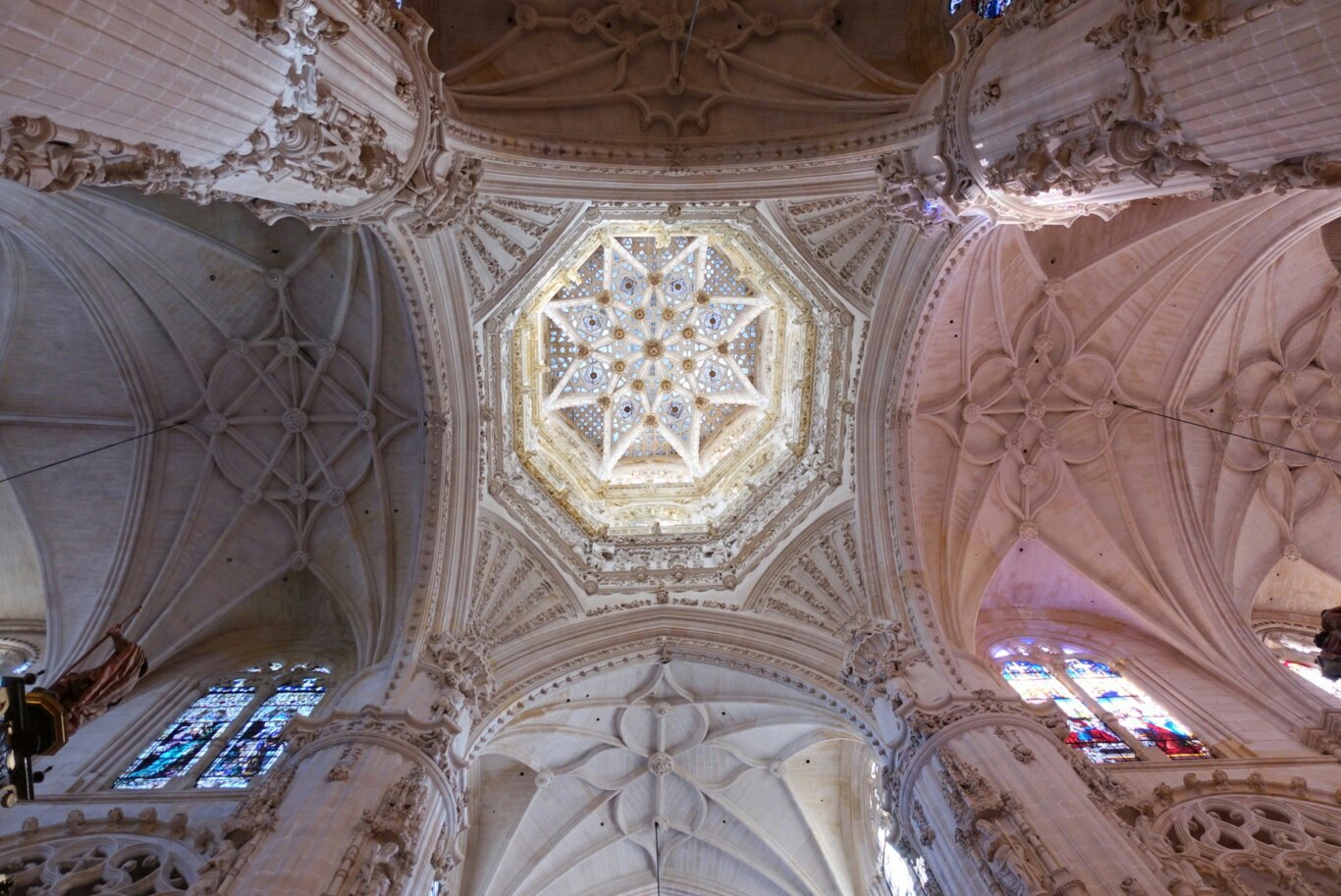 The view straight up inside the cathedral. 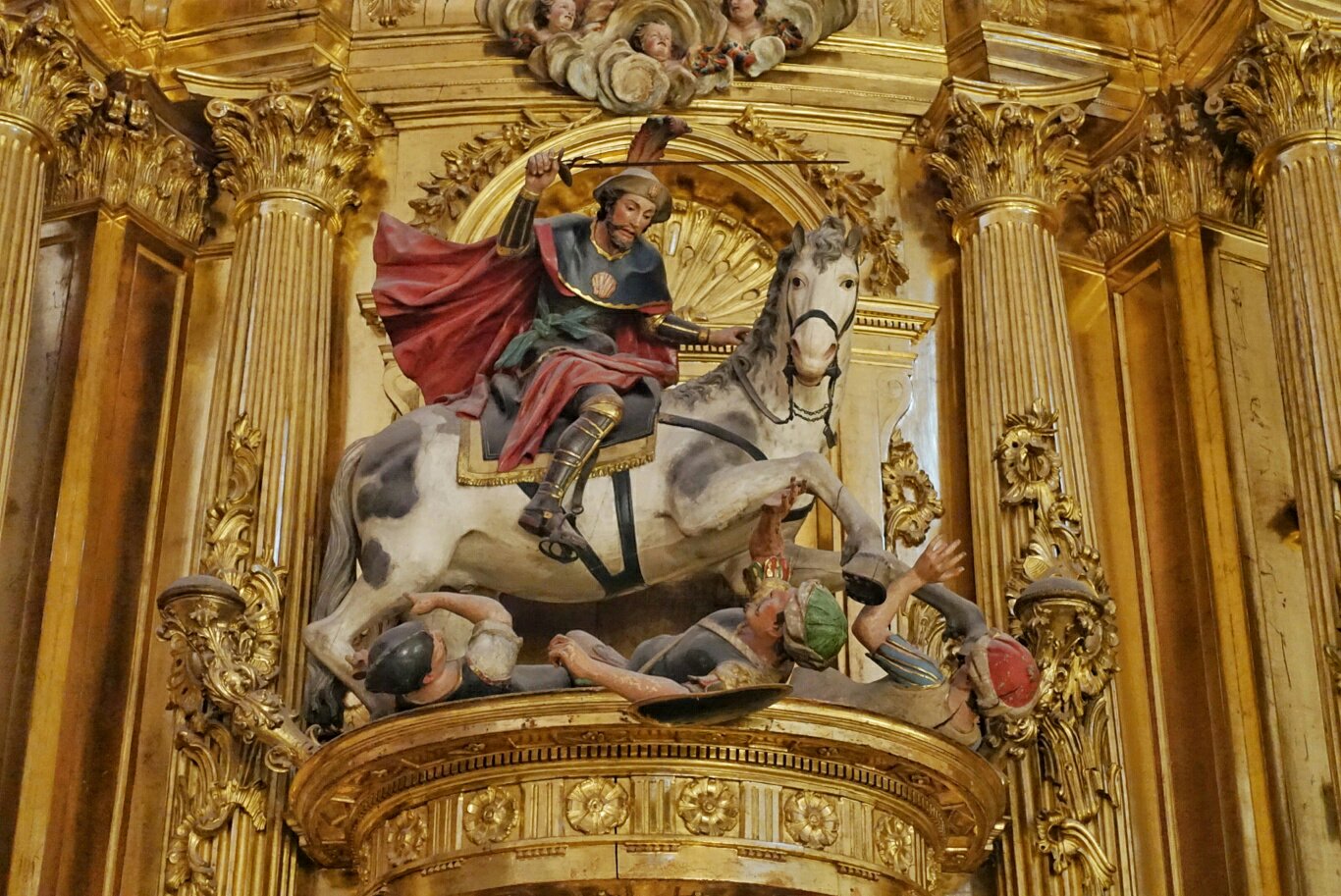