Slightly Too Long in Bayonne

I am in Bayonne because I read that a typical route to St. Jean Pied de Port, the quasi-official start of the Camino Frances, involves flying to Paris, taking the train to Bayonne, and then taking another train to St Jean “Foot Port.” It is also typical for pilgrims to fly into Madrid or Barcelona, but, fine as those cities are, Paris is in a class of its own.

The “Camino Frances” is the “French Road” – the path to Santiago de Compostela that starts in France. It is the most famous of the various Caminos, which means that it is the most crowded, and which also means it has the most pilgrim infrastructure: the most hostels, the best waymarking, the most restaurants, the attention of the world. If someone tells you that they “walked the Camino,” they are saying they walked the Camino Frances. Otherwise, they might tell you that they walked to Santiago via the Camino Norte (which skirts the Bay of Biscay, on Spain’s north coast) or the Camino Portugues (which heads north to Santiago through Portugal). Anyone who tells you something like deserves your respect; they have chosen the hard way of doing something whose easy way is already very difficult.

This is my third “introductory” post – the third post that is not about the experience of walking the Camino. At my current rate, of a new post every day-and-a-half, I will have inflicted something like 25 of these on my few friends and family members who possess the constitutions to attempt to read them. I assume that I will have less time for writing when I start walking. In addition, I am addressing these posts to myself, to a greater extent than I am to any hypothetical reader; if I weren’t talking in this electronic journal, I wouldn’t be talking at all. And, finally, it is the easiest thing in the world to skip a piece when you find it boring. Try it!

I am sitting at a riverside café named “Les Tontons Flingueurs,”a series of glyphs that means nothing to me at all. “Sweet Home Alabama” is playing softly in the background. Raindrops streak the canopy that protects the streetside tables. The sun has set.

When I arrived in Bayonne, yesterday afternoon, I walked into town from the train station, found my superbly situated hotel, in the heart of the medieval district, and checked in. When I reserved a room with a shared bath, back in Seattle, I had thought I was being continental – I hadn’t imagined that the bathroom would be at the end of the hall and down a flight of stairs. Or that the floor of my bedroom would be canted like the deck of a wrecked ship being beaten to death on a reef. On the other hand, I also had not imagined that turning on the TV would immediately show me an obliging young woman who removed her blouse almost as if she were unaware of the watching camera.

After getting established, I walked up the hill to the 13th century cathedral, where an accomplished string quartet in the circumflex* was apparently rehearsing for an upcoming concert. I examined the hoardings on a bulletin board in the marthamble and saw that they were planning to perform the Mozart Requiem in one hour! (This version, pour quatuor à cordes, was produced more than a century ago by someone named Lichtenthal.) One hour is not enough time for a sit-down meal in France, but I was sure I could find something to eat, somewhere, and be back at the cathedral well before the music started. One block away, a restaurant served me a steaming wedge of quiche in a to-go bag, which I devoured wolfishly in an alleyway — assuming that a hungry wolf might attempt to eat a savory gobbet that has been heated to the temperature of molten steel.

The music was lovely, although the acoustics of a cathedral are not really correct for a string quartet. The dark pews were full of quiet, attentive listeners. Not a single cellphone chirped during the entire performance.

I took a few photographs of the dark city on the way back to my hotel, but none of them convey the cool air, the glow of rain between the cobbles, or the clatter of conversation in the bars.

Today is Sunday and, to my surprise, much of Bayonne’s tourist infrastructure has vanished. I wandered through the ancient part of the city, admiring the architecture and wishing someone would sell me a sandwich. Finding Les Tontons Flingueurs this evening was a relief. To be fair, there are many restaurants that are still open, but I had a hard time finding one that was neither deserted nor crowded, swanky nor funky, loud nor sepulchral. I’d rather be hungry than intimidated.

I’m sure this is enough for a post that exists mainly as a buffer before the photos you see below. Tomorrow I’m going to St. Jean Pied de Port, and on Tuesday I’m walking over the Pyrenees.

* I continue here my tradition of abandoning any attempt to remember the actual names of the parts of church buildings. 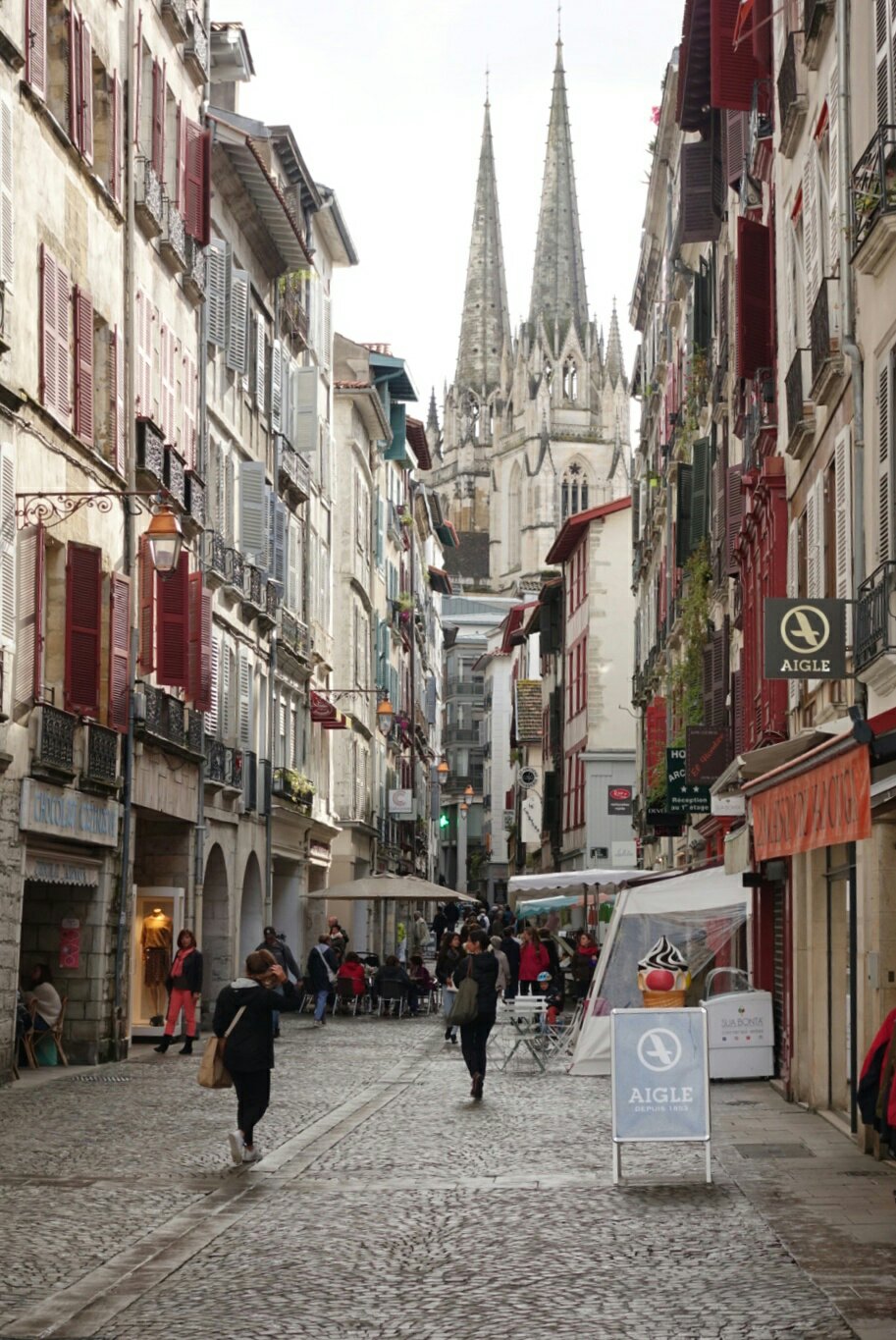 This photo was taken a few feet from the entrance to my hotel.

Making an impression with your knockers. 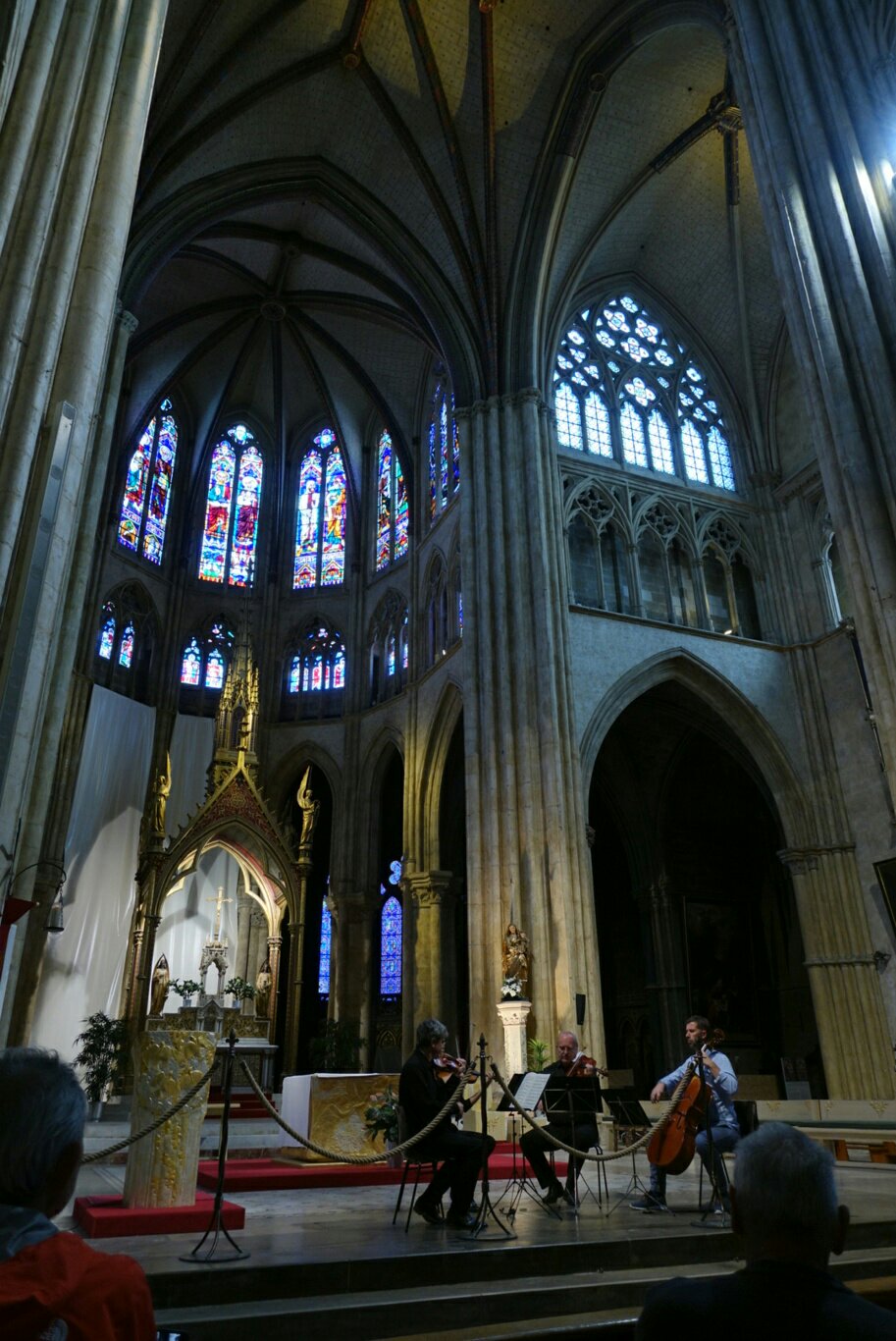 The quartet rehearses in Bayonne’s cathedral. 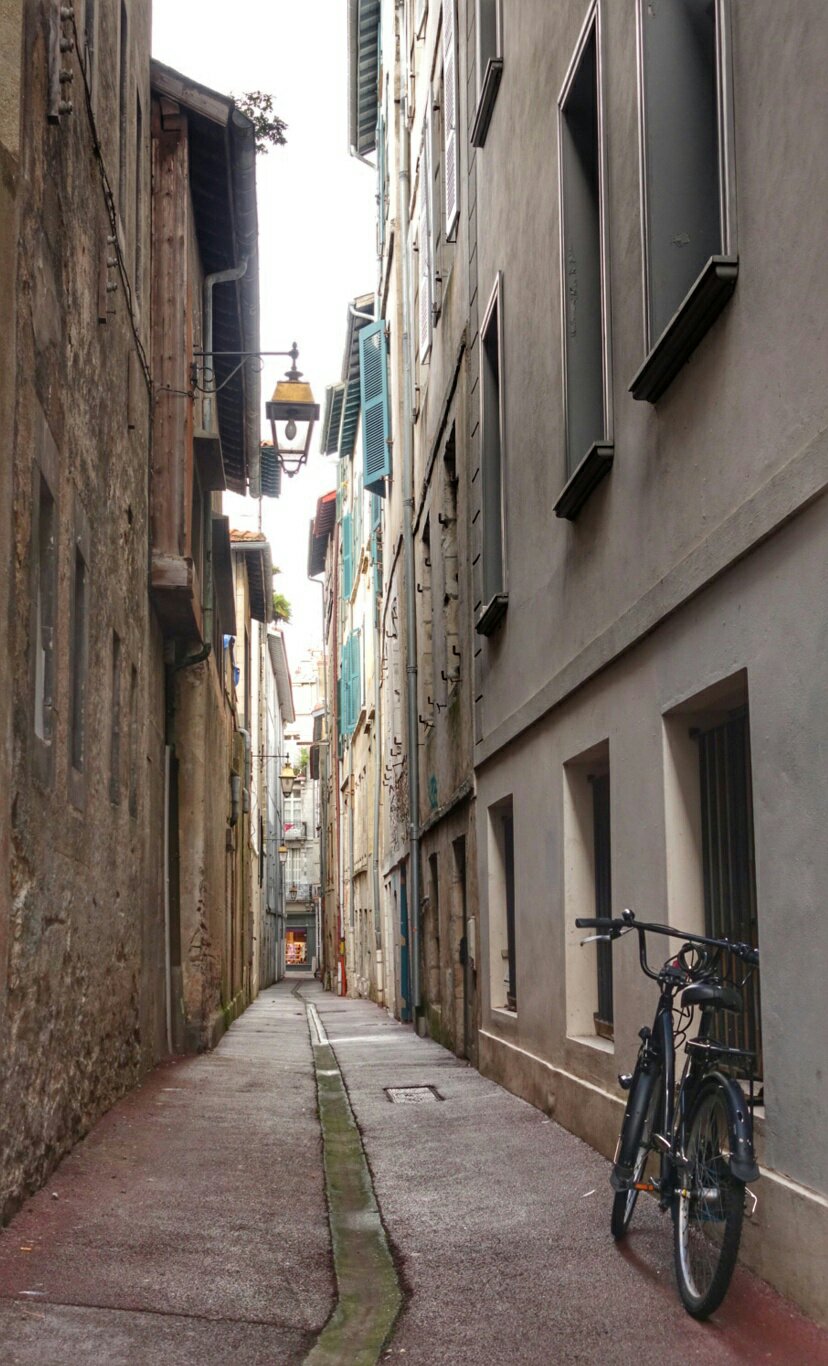 A good place to devour a quiche. 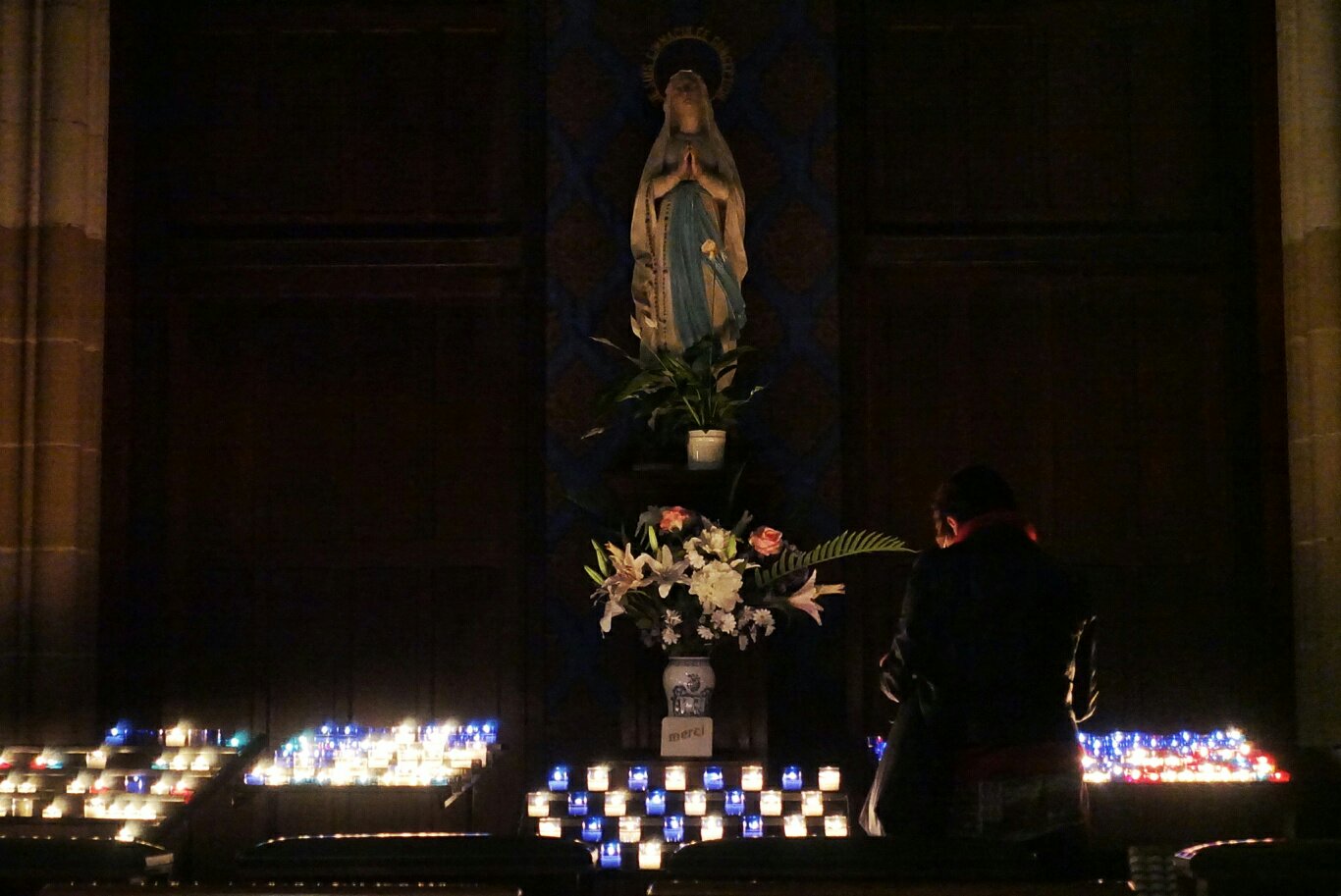 Blue and white candles for the virgin. 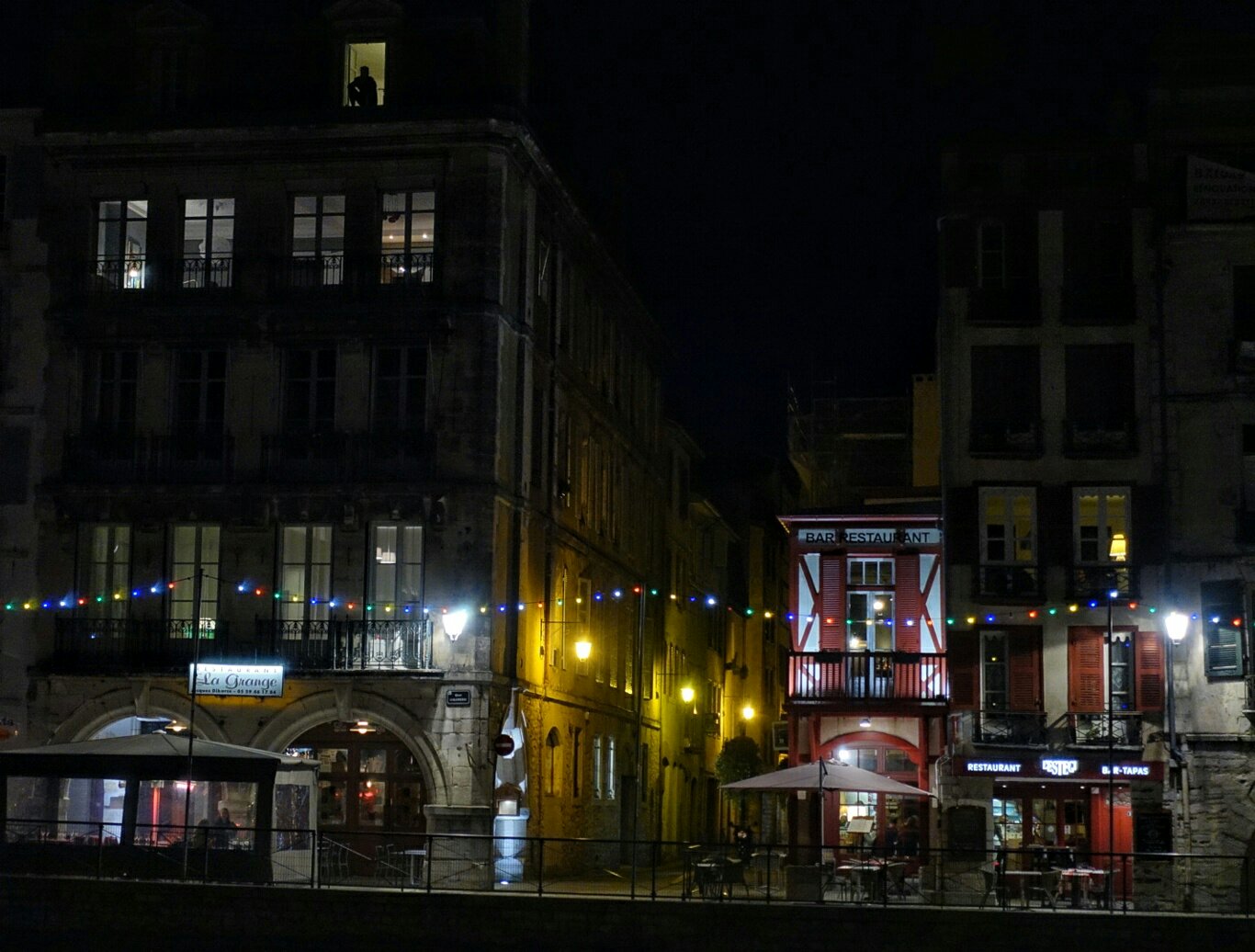 A silhouetted figure can be seen relaxing in a window in the top left corner of this picture. 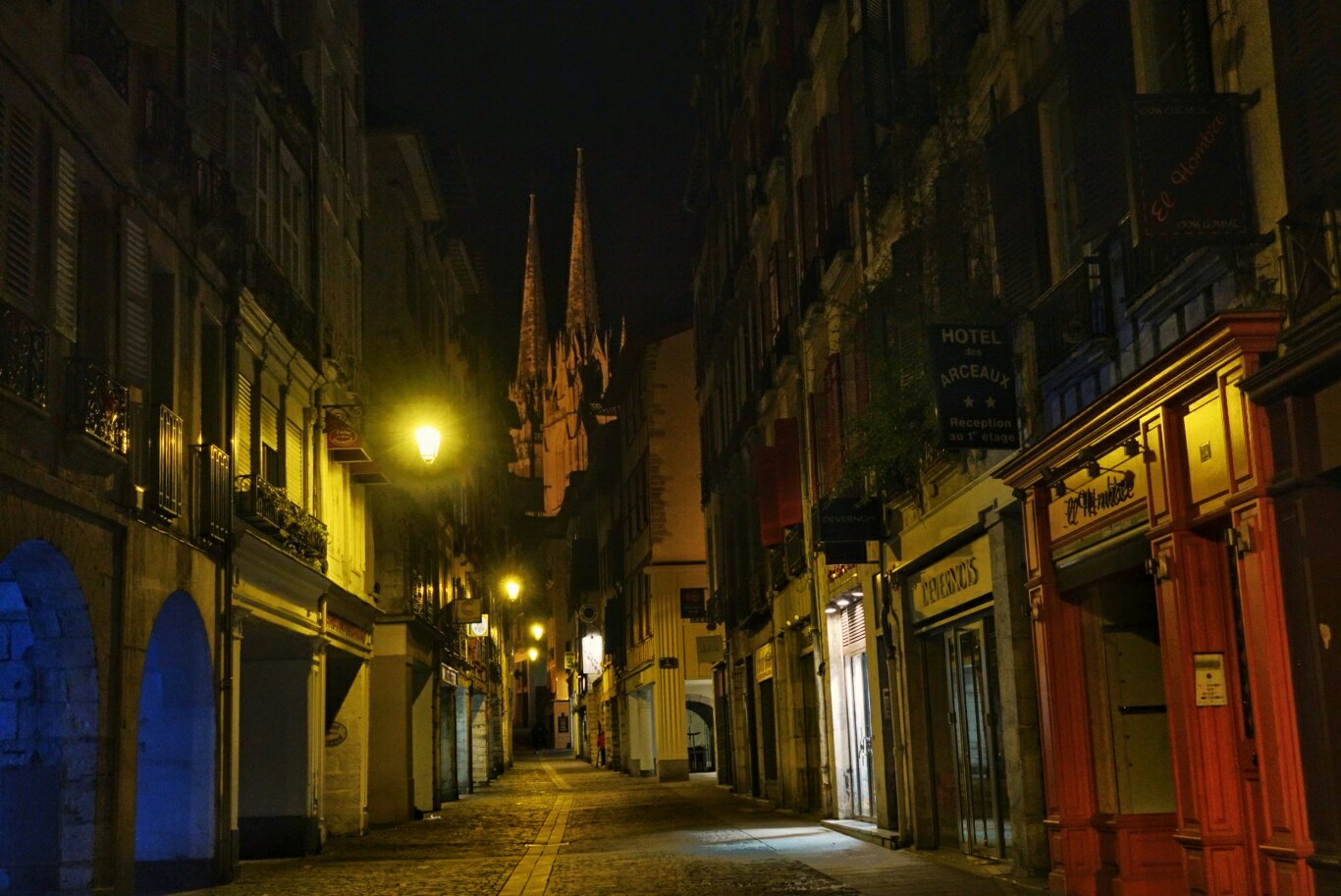 Walking back to the hotel. 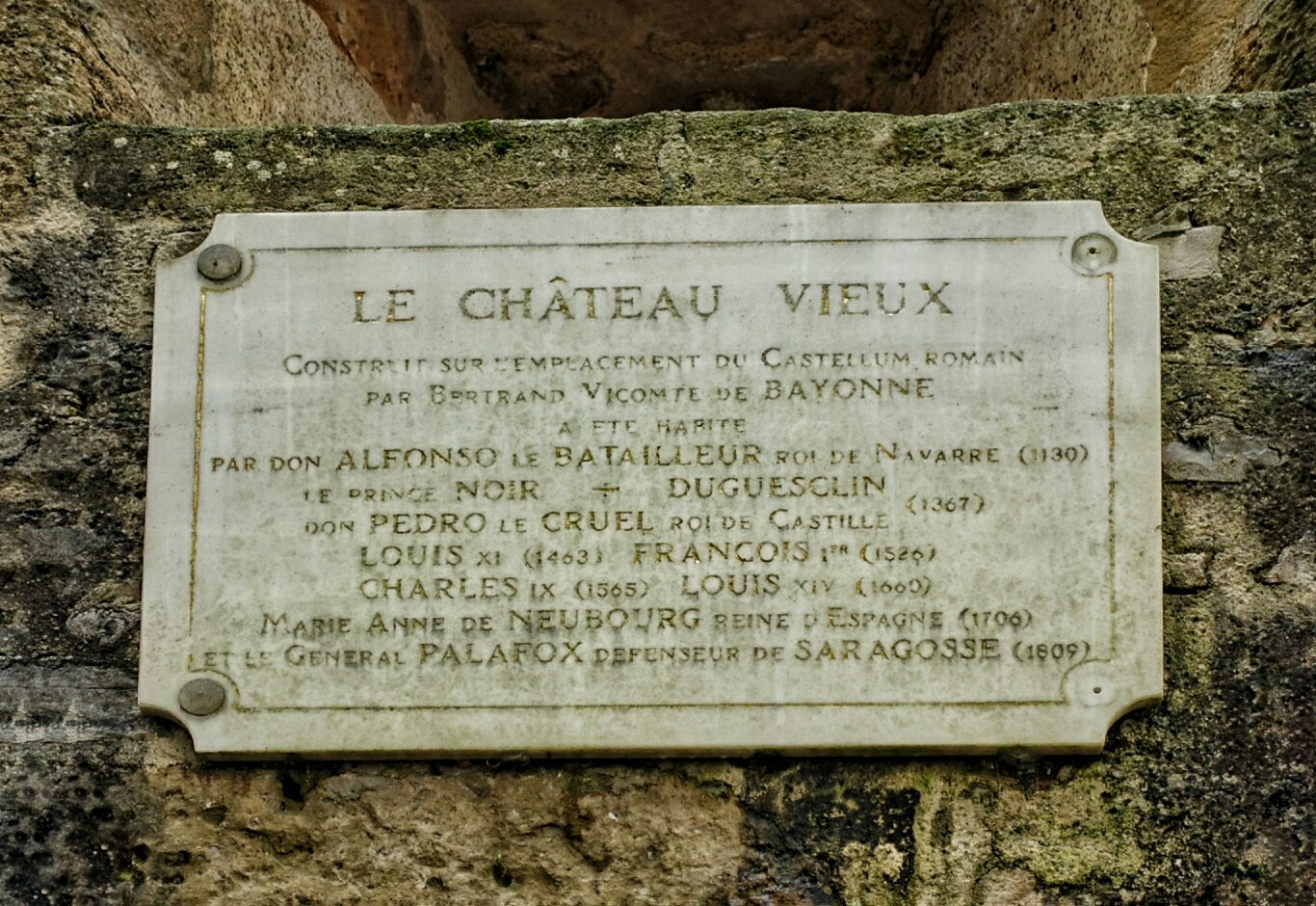 This commemorative slab is a reminder of how much better our names could be. Don Alfonso the Battler, King of Navarre! The Black Prince! Don Pedro the Cruel, King of Castille! 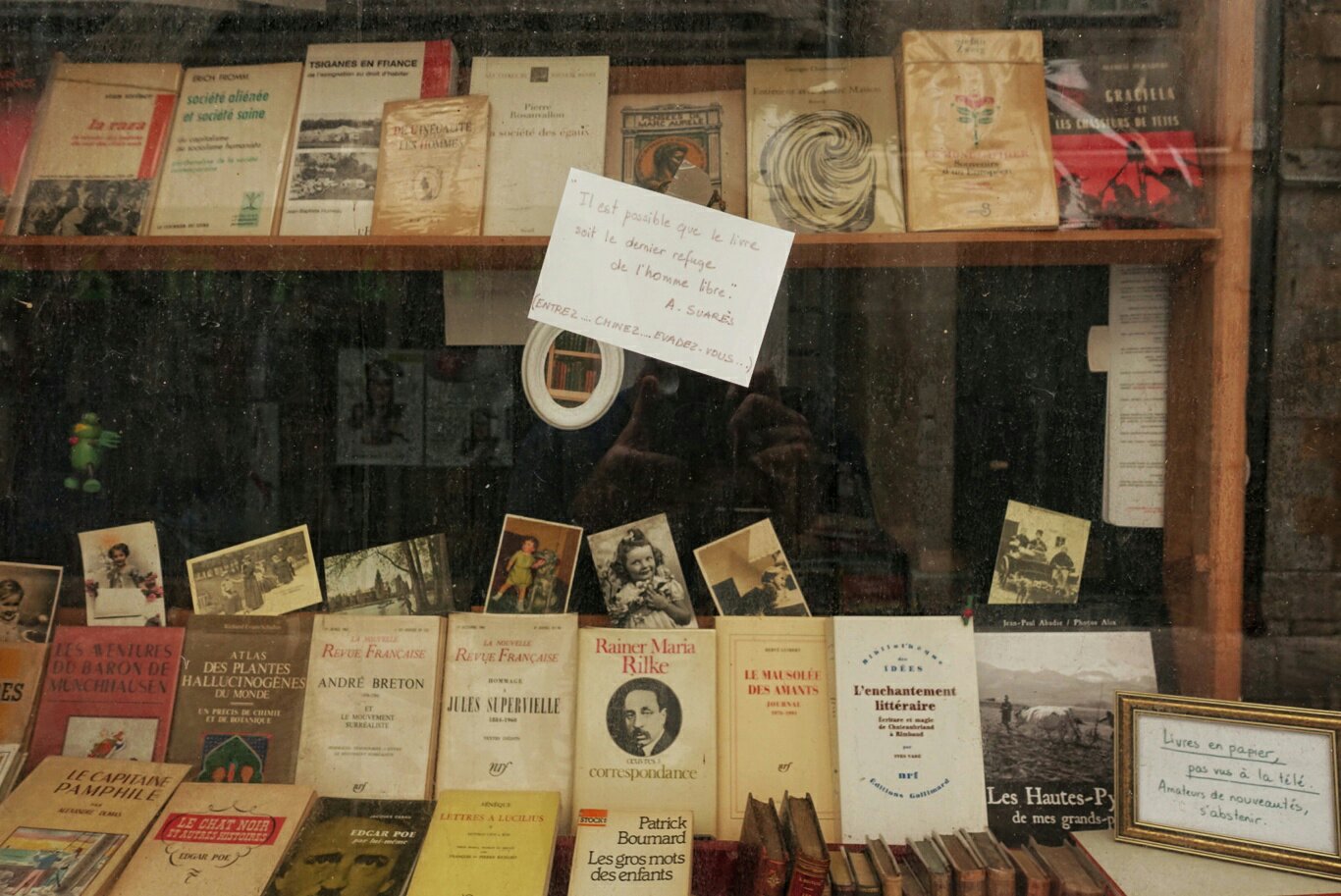 The card taped to the window of this bookshop says, “It is possible that the book is the last refuge of the free man. – A. Suarez”