The Sorrows of Young Rocky

I was working on my next blog entry at Café del Parque early last week, and had made my way through two Cafe Americanos and perhaps 1500 words, when I drew a line across the page in my revoltingly darling teddy-bear notebook and wrote these words:

What am I doing? Why would anyone be interested in this? This is terrible. 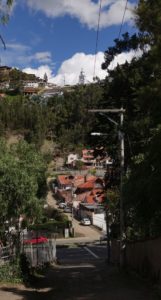 So I started over. The second effort, which I built around a theme that could be summed up as “no pain, no gain,” ran to 2000 words. It started by quoting the theme song of Super Chicken, the Saturday-morning cartoon from 1967, and then moved on to my musings about how hard it has been to skip lunch lately, and it told the exciting story about how I climbed the stairs to the Mirador de Turi without stopping to rest, and it recounted my brief meeting with a bunch of friendly expats, who almost but not quite invited me along on their next day’s activities, and then it concluded with an overworked account of an encounter with sublimity one night not long ago. It was an uncomfortable melange that combined the self obsession of The Sorrows of Young Werther with the brainless optimism of Rocky, but I had decided that it would have to be good enough, because it is absurd for me to spend so much time on these blog posts.

But the damn thing is just wrong. I can’t inflict it on you. 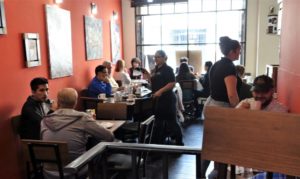 I realized I would have to make a third effort this morning, while I was sitting in The Sunrise Cafe. This diner would not be out of place in Ballard – they offer enormous American-style breakfasts, unlimited refills of weak coffee, friendly waiters who speak perfect, idiomatic English, and it is packed with gringos. I had my Kindle open in front of me, as usual, where I was reading Sean Carroll’s The Big Picture while waiting for my omelet to arrive.

The Big Picture is a pop-science book (cosmology, quantum field theory, and so on) that also grapples with philosophy. I finished David Hume’s An Enquiry Concerning Human Understanding not long ago, which I filled with notes about the many ways in which his ideas about cause and effect were obviously incorrect – but here was Sean Carroll advancing much the same argument, and bringing along with him such heavyweights as Bertrand Russell, who he quotes as follows:

The law of causality, I believe, like much that passes muster among philosophers, is a relic of a bygone age, surviving, like the monarchy, only because it is erroneously supposed to do no harm.

I was enjoying the hell out of this intelligent attempt to change my mind when it occurred to me that the books I’ve been reading lately have given me an enormous amount of pleasure: An Enquiry Concerning Human Understanding, Steven Pinker’s The Better Angels of Our Nature, The Best Travel Writing 2000, Alain de Botton’s The Art of Travel, Jared Diamond’s latest book, Upheaval, and now The Big Picture. And it isn’t just books that have been giving me jolts of happiness. A recent visit to El Museo de las Culturas Aborigenes was terrific, for example. I’ve been revisiting my collections of Beethoven and Rick and Morty and loving them both. Talking about climbing the stairs at the Mirador de Turi may be self-congratulatory, but the exercise has made me happy, however indelicate it may be to discuss it. Last week I watched the video feed of my daughter’s defense of her doctoral dissertation, which left me almost incoherent with pride and affection. 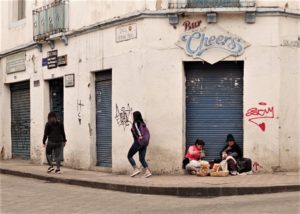 And there are hundreds of smaller sources of pleasure, too. The conclusion of my second attempt at this blog entry included this: “It is pouring rain outside the windows of the Café Austria, where I am typing these words. A young man, almost a boy, who pushes a cart laden with individual bags of nuts, has taken shelter under the eaves. The nuts look delicious, but I can’t eat for another three hours. A cop in a bright yellow rain slicker is directing traffic in the intersection; the color is so intense that it tickles at the possibility that I could see it with real clarity, in a moment that might relieve me of my selfhood for just a moment….” You see the problem. While I was writing those words, I was conscientiously ignoring the fact that I was enjoying myself. I was so intent on keeping that cringe-inducing “relieve me of my selfhood” fiction aloft that I had become blind to my actual, present happiness.

Strong coffee, walking through Cuenca’s old, dark streets at night, the ridiculous, friendly high-fives that Teresa, my new Spanish teacher, insists on giving me when I conjugate something correctly – there are too many such moments to list. Despite the impression I was laboring to convey in my second abortive attempt at this post, it is not the case that I am trudging along in the darkness, waiting for an occasional supernova to brighten the sky and remind me of why I am alive. I do love those flashes of unalloyed joy – they are better than high-fives and strong coffee – but my life is full of smaller glimmers of happiness, too.

Here is the supernova climax of the post you will never see:

One of the many fine restaurants within a short walk of my hotel room is A Pedir de Boca – “A Request of the Mouth,” I guess – where the Dutch owner and chef creates remarkable conflations of pasta and vegetables and sauces and then checks to make sure that you’re enjoying them; his pride is just what you’d expect of someone who is so good at what he does. After an excellent dinner there, a few days ago, I thanked the young man who had been waiting on me and then walked home in the dark through Cuenca’s ancient streets. It was cool, as usual, and late enough that traffic was no longer an issue. Some of the street-corner vendors still had their carts set up, with candy bars and fruit and cigarettes and tchotchkes and so on, but most of them had gone home for the night. The blue domes of the cathedral hung over the darkness as I walked up to the main public square, where I turned right on Calle Mariscal Sucre. I was only three or four blocks away from home at this point. The trees of the Parque de Calderón were on my left, and ahead of me were the white walls of the old cathedral, when suddenly, for no obvious reason, I fully understood where I was and what I was doing. I am alive in Ecuador, for God’s sake. Look how lovely it all is.

Ten years ago, or maybe more, I embarked on a solo hike up to Tuck and Robin Lakes, above Cle Elum. After a steep climb up from the river bottom, I arrived at Tuck Lake, where the trail came to an end. Robin Lakes were above me and to the right somewhere; since the cliffs on the left side of the ridge were clearly impassable, and the cliffs on the right side of the ridge were even worse, I took the only remaining option and went straight up the ridgeline. At one point I accidentally tore the toe off one of my boots, because the only way to make progress was by jamming my feet into a crack in the granite. After a couple of hours of this – and confirmation from occasional cairns that I was not lost – I crossed an enormous gentle shoulder and entered the Robin Lakes basin.

This remains one of the prettiest places I have ever visited. I made camp on a little promontory jutting out into Lower Robin Lake and then strolled happily along the streams and lakeshores, admiring the granite and water and cliffs, until dinnertime. When it got dark, I sat by the water near my tent and watched as the brightest display of the Milky Way I had ever seen appeared over the lake. The crescent of stars arced over my head and touched the water, and then its reflection continued, curving across the lake to my feet. My attempts to take a photograph of this were a failure; it exists only in my memory now.

I mention this here because there were things about that hike that are analogous to the solitary traveling I’m doing now. I was alone on that hike to Robin Lakes, as I am here, and I remember it today as one of the supreme outdoor experiences of my life. It was a difficult trip but it was absolutely worth the effort. Also, the supernova metaphor is dismantled by my experience of the Milky Way at Robin Lakes. The Milky Way is something like 100 billion stars, most of them far too distant to be resolved by the naked eye – it’s a wash of light, a glow speckled with stars. It would not be improved by supernovae.

I’ll never see the Milky Way like that again. Even if I were to someday find myself in the backcountry on another night as dark as that, and even if I were at the shore of another small, still lake, where the galaxy was reflected back at me in an enormous circle, I am not as capable now as I was then. It is harder for me to get to places like that now, and my eyes don’t gather light the way they used to. (I talk about this, and provide shocking visual examples, in a blog post I wrote while I was in Guatemala, here.)

I treasure those bright individual moments of clarity, like when I was walking home past the Parque de Calderón, but the wash of light is more important. It’s the accumulation of small joys – of high-fives, and watching the vendors taking shelter from the rain, and the pain in my chest while I watch my daughter explaining ectomycorrhizal fungi, and a big breakfast at The Sunrise Cafe – that matters. As my vision fades, and my muscles fail, and my stumbling faculties allow me to consider such false and tasteless posturing as I only narrowly avoided publishing on this blog – and even as my disintegrating memory no longer allows me to recall moments that I used to think were defining features of my life – that beautiful, dim, almost unbelievable glow will remain.

Photos from early June can be found here. 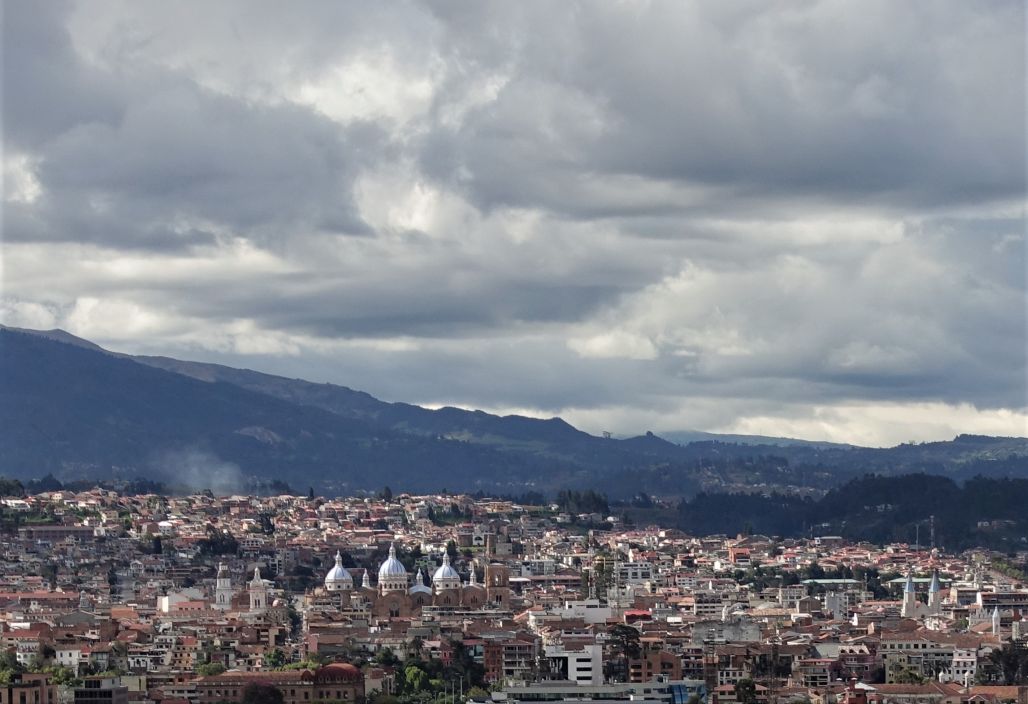