This post has no theme. It is a potpourri of notes I’ve taken on my phone, details of daily life, budget accounting, and other snapshots.

Unmemorable
After spending two hours every day for a month with him, in a small room at the Becari Language School in Oaxaca, my teacher, Manuel, had still never learned my name.

Gilded Lilies in Quito
Jesuit church – where am I, anyway? Gold leaf everywhere. This is Donald Trump’s idea of a classy church. A guy I met on the street told me that churches would sometimes hide solid chunks of gold behind the gold leaf, for safekeeping – unlikely. All of the paintings and statuary and the mannequins in clothing stores show European faces and skin. Even the Virgen de Quito, which some people say is modeled after a mestizo woman, is clearly not.

In the Iglesia de San Francisco now, only slightly less gaudy than the Jesuit monstrosity. This is the Baroque crossed with a display window at Macy’s.

On Seeing a Pomeranian in Baños
It just occurred to me that the remarkably different morphologies of dogs and their amusing unwillingness and perhaps inability to judge each other by their size and appearance may be connected. If a dog noticed the differences between dogs, it would prefer to mate with the best dogs – those that looked like themselves. They would speciate. But, since they make no such distinctions, a pomeranian may dream of the charms of a greyhound, and dogs remain dogs.

Music in Baños
A street guitarist just entered the Casa Hood restaurant and did “Stand By Me” – I didn’t recognize the lyrics, but the tune is unmistakable. His guitar is better than his larynx. He leaves and the sound system plays “Clair de Lune,” which turns out to be exactly what I wanted to hear.

It’s the following morning. I’m at a breakfast restaurant, waiting for the bus that will take me to Cuenca. An Andean band comes in and plays – the final number, “I’d Rather Be a Hammer that a Nail,” works surprisingly well as a panpipe tune. After a few minutes, the “Stand By Me” guitarist appears. I can’t get away from this guy.

Swath
Three strutting transvestites cross the Parque Calderón, cutting a swath with their six preposterous boobs, and leaving in their wake dozens of wide-eyed, grinning groups of bench sitters.

Expats
Met a group of expats at a Thai restaurant the other night. There was some talk of my joining them on an expedition to a nearby hot spring on the following day, but they didn’t reach out to me afterward. I’m sure my peculiarities were off-putting; my mistake may have been telling the table that this small event was the longest sustained conversation I’d had for a month. 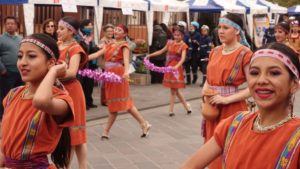 I met a frighteningly gregarious American man at the Yanapuma Language School and ran into him a few days later at the Inti Raymi parade. “Bill!” he said, clapping me on the shoulder. “I want you to meet my buddy, Kevin. Kevin, Bill.”

“Oh,” said my acquaintance, “You also need to meet Luis, my teacher at Yanapuma! He’s right here. Luis! Do you know Bill? Bill, you should get to know Luis. He’s the best.”

It was too late.

A video I made of the Inti Raymi parade.

One morning last week I took a taxi to the Termini Terrestre bus station, found the office of the bus company I needed (among dozens of different companies), bought a ticket using my pidgin, found the bus I needed, watched it drive away empty, because it was leaking some sort of dark aceite onto the, I don’t know, piso, waited an hour for a new bus, and then rode up to Parque Nacional El Cajas for some rambling.

El Cajas is high tundra, almost treeless, speckled with lakes and carpeted by plants I’d never seen before. I spent five hours up there before going back to the road and flagging down a bus that brought me back to Cuenca. That was the best five hours I’ve spent since I don’t know when.

The visitor center at El Cajas is at about 12,500’, and the walking route I’d decided to attempt took me higher still, so I was on guard against altitude sickness – looking for symptoms like headache, nausea, and the sad realization that there is no point whatsoever to anything at all – but I didn’t have any trouble beyond gasping like a dowager at a gay-pride parade. Ruta Dos took me up to the top of a knob with magnificent views on all sides and then down to Laguna Toreadora, where I took another trail through a little wooded area of what appeared to be dwarf madronas, past innumerable little lakes, over a lot of extremely boggy ground, past a flock of Andean gulls, which decided that I should be hovered over and screeched loudly at for a few hundred yards, and then back to the visitor center for a late lunch. 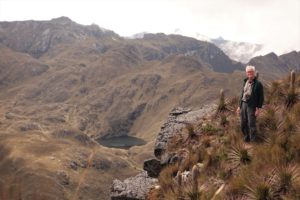 One of the trail markers told me that the high point of Ruta Dos was 4267 meters. When I got back to Cuenca, I used the Internet to convert this to feet, just to put a number I could understand to the altitude. The top of that knob, according to my conversion, is 13,999’4” above sea level. My first reaction to this number was disgust – this could have been my first hike above 14,000’ since climbing Mt. Whitney, if I had only known that I needed to hop into the air when I got to the summit. But then I realized that I don’t really care about the altitude reached by my boots. My boots may not have crested 14,000’, but my eyeballs, which, at 5” under the top of my head are about 5’8” off the ground, soaked up the view from 14,005’ exactly.

You can see photos from El Cajas here.

Going to Peru
On July 11 I’m taking an overnight bus south across the border into Peru (a border crossing that Lonely Planet says is the worst on the continent, measured by inconvenience and thievery), and then flying from the town of Tumbes, in NW Peru, to Cusco. There are no direct flights from Cuenca into Peru, and the indirect flights would require an overnight stay in Guayaquil, a big, dangerous city on the Ecuadorian coast, and then spending $350 on the ticket to Cusco. Taking a bus into Peru and then flying from Tumbes will be faster and will cost me a total of $160. The downsides are the misery of an overnight bus trip and the potential for robbery, kidnapping, and murder. No problem.

Budget Update
As of June 30, I have been in Ecuador for 47 days. Including the airfare from Oaxaca to Quito, and my tuition at the Yanapuma Language School, it has cost me $77.26/day to be here.

When I did this same calculation for the 34 days I spent in Oaxaca, the figure I arrived at was $77.69/day. That’s a 45-cent difference – which is to say no difference at all. I’m incredulous at the similarity of these numbers.

The Peruvian part of this adventure is going to be more expensive; I’ll be signing up for guided trips into the Andes and the Amazon, and being more nomadic than usual always entails extra costs. After Peru – sometime in August – I will probably be flying to Europe, where my budget will simply explode. It doesn’t bear thinking about.

Here is a pie chart that shows my expenses in various categories. It’s much like the chart I published in Oaxaca and the Equator.

Sundries are groceries and other odds & ends – consumables.

Lodging was my single biggest expense.

Fees and Misc. include the Spanish classes I was taking, plus museum-entrance fees and occasional taxis.

Daily Insurance is what I’m spending for health insurance. This category also includes the pittance I’m spending to keep my car insured, under a tarp in Seattle.

Transportation is the airfare to get from Oaxaca to Quito and then buses from Quito to Baños and from Baños to Cuenca.

Restaurant Meals, at $13/day, are a little higher than my Oaxacan costs – probably because I spent the first half of my stay in Cuenca in a hotel, where cooking was effectively impossible.

Recent photos from Cuenca can be found here.