In the 18th century, no one was sure whether the Earth was perfectly spherical, or, if it was misshapen in some way, where and exactly how it diverged from perfection. The French astronomer Jacques Cassini (after whom the Saturn probe was named) thought that it bulged at the poles; Issac Newton thought it bulged at the equator. To settle the matter, Louis XV sent out two expeditions in 1735: one to Lapland, under the direction of Anders Celsius, and the other to Ecuador. In 1739, Charles Marie de La Condamine, of the French Geodesic Mission, climbed the tower of the church on the east side of Cuenca’s main square and measured the last segment of a carefully surveyed line that stretched all the way up to Quito, 192 very rugged straight-line miles to the north.

None of my sources for this information specify precisely how the French Geodesic Mission did its work. I assume that the scientists used a sextant or astrolabe to determine the precise latitudes of Quito and Cuenca, and then used surveying tools to triangulate distances from one prominence to another all the way from Quito to Cuenca. The scientists already knew the exact length of a degree of latitude in the area of Paris, which is at about 49 degrees; if a degree of latitude was shorter in Ecuador, that meant the earth bulged at the equator.

This explanation makes sense to me, but it’s just speculation, and it is almost certainly wrong in some important ways. I’m sure it’s within sniffing distance of the truth, though. The basic elements of establishing latitudes, carefully triangulating distances, and comparing the results against known distances in Europe, must be correct. I can’t visualize exactly why a bulge at the equator produces a shorter distance between latitude lines. I also can’t imagine how the scientists took into account the changes in altitude as they progressed and the zig-zag course their measurements must have run; the calculations must have been infinitely ticklish.

The French Geodesic Mission was nearly scuttled by problems that had nothing to do with their scientific goals. By the time it arrived in Quito, one of the members had spent a large chunk of their funds on a diamond for a Haitian prostitute, and the expedition had split into three quarreling factions that were traveling separately. La Condamine had to travel to Lima at one point, to replenish expedition funds after an expected disbursal from Paris hadn’t arrived. In 1739, here in Cuenca, the expedition’s surgeon got drunk and joined his local lover at a bullfight, where she was sitting with her father; the locals quickly became irate at his effrontery and stabbed him to death, shouting “Kill the French foreigners!” By this time, the expedition to Lapland had already produced its results, proving that the Earth was flattened at the poles, and eliminating most of the justification for the measurements that the expedition to Ecuador had been laboring over for years. Still, tragedy and farce like this are the essence of a good story. If everything had gone well for the French Geodesic Mission, I wouldn’t have written this paragraph.

In the end, the expedition determined that a degree of latitude at the equator is equal to 68.7 miles – a measurement that was accurate to within 50 yards. This confirmed Newton’s idea about the shape of the Earth. Modern measurements give the distance as 68.703 miles at the equator and 69.407 miles at the poles.

I spent half an hour in the square under La Condamine’s church today, watching the ice cream vendors flapping the lids of their Igloo coolers open and closed, and the kids wailing in grief at their tiny injustices, and the shoe-shine ruffians smacking each other’s caps off onto the ground. Two days ago I had dinner at a little place up by the square where bullfights used to be held, and where the surgeon of the French Geodesic Mission made his last crapulous error in judgment. I have been doing what I can to see the city. 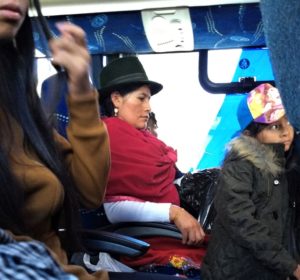 It is an eight-hour bus trip from Baños to Cuenca. I spent it gazing out the window and listening to podcasts. Sometimes I tried to take photographs of towns at the bottoms of shocking green declivities. People got aboard at the infrequent stops and went up and down the aisle, selling potato and plantain chips, candy, bottled water, and ice cream. An indigenous woman in one of the front seats used her teeth to tear ribbons from a 16-inch-long piece of sugar cane, which she then tucked into her mouth and chewed thoughtfully.

My Airbnb here in Cuenca is a small hotel room that would hardly be out of place in the U.S., in a building whose quiet and cleanliness and tasteful appointments leave me feeling deflated. The room contains a chair and a small shelf that may be intended as a desk, but I cannot work there; the chair is so low and the desk so high that trying to type leaves me looking like Glenn Gould at the keyboard – or, if comparing myself to such a genius seems untoward, like a squirrel trying to open an acorn. The room is incredibly cheap, though – $15 a night – and there is an open-air patio on the 4th floor where I can work – so I think I will stay there.

Cuenca is Ecuador’s third-largest city, behind Quito and Guayaquil– it is home to something half a million people. The air is cool, the sidewalks are broad and clean, the traffic is sedate, by Latin American standards, the architecture is lovely. It is full of cafés and restaurants. The crime rate is lower than in most American cities. It has been at the top of Forbes magazine’s list of best places to retire overseas for more than a decade; I write these words in a café where I am one of six customers, all gringos.

Cuenca may well be the retirement mecca that I’ve been looking for, but I am not sure. Despite having been here for more than a week, I feel as though I have hardly engaged with the city at all. I am floating above it. Adrift.

I just read a wonderful book by Alain de Botton called The Art of Travel. This may be the first thing I have ever read that talks about traveling with psychological honesty. Botton knows that it is impossible to be alive to your surroundings with every moment of a visit to an exotic locale; that days can go by in which the best thing to happen to you is a snatch of music, or rubbing the ears of a small dog, or reading a passage in an unexpectedly stylish and evocative book. Here is Botton talking about a visit to Madrid:

When I awoke the next morning, it was to an intense lethargy, as though my veins had become silted up with fine sugar or sand. Sunlight shone through the pink-and-grey plastic-coated curtains, and traffic could be heard along the avenue. On the desk lay several magazines provided by the hotel, offering information about the city and two guidebooks that I had brought from home. In their different ways, they conspired to suggest that an exciting and multifarious phenomenon called Madrid was waiting to be discovered outside, promising an embarrassment of monuments, churches, museums, fountains, plazas and shopping streets. And yet the prospect of those enticements, about which I had heard so much and which I knew I was privileged to be able to see, merely provoked in me a combination of listlessness and self-disgust at the contrast between my own indolence and what I imagined would have been the eagerness of more normal visitors. My overwhelming wish was to remain in bed and, if possible, catch an early flight home.

I have not had an overwhelming wish to remain in bed, but I have been doing something similar. My body goes out into the streets, but my mind remains under the bedclothes. I do not engage, except in occasional moments that have nothing to do with being in Ecuador. 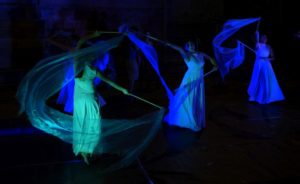 On one of my first nights here, my usual angst-filled search for a dinner restaurant ended at a place down by the river that was full of gringos. I ate a dinner whose details I can no longer recall while people in an adjoining square set up for some kind of a show. As I was leaving, a dance performance began.

Watching the dancers was one of those moments of engagement.

I have visited the churches and the parks. There is a museum next to the site of an Incan village of which nothing remains but a series of knee-high foundation walls. I have walked the streets of the old colonial city. None of it has moved me.

But the boy whose sister pushed his bicycle past me as I sat in the park, while he sat astride it and sobbed, his cheeks glistening with tears – that mattered to me. The beauty of the hard-boiled quail eggs that are sold as snacks left me unable to think about anything else. The kids in their Sunday clothes, rough-housing in a way that implied they were experiencing a rare unsupervised moment, and the tiny girl in her absurd, off-the-shoulder gown, who tugged at the bodice as though she had never worn such a garment before – yes. The long climb up the stairs to Mirador de Turi, with its splendid view of Cuenca laid out to the north, and the lovers draping themselves over each other along the balustrade at the top, did nothing for me, but the pounding of my heart, and the driving of my lungs – the confirmation of my animal life – yes.

I admire La Condamine’s dedication to the French Geodesic Mission , and his precision, and his learning, and his ability to keep such an abstract goal in the forefront of his mind, but I don’t envy him for these things. I envy the people I do not admire. I envy the man who bought an enormous diamond for a Haitian prostitute. I envy the man who declared his drunken love at a bullfight and was killed for his stupidity. Their passion was deranged and beautiful.

These fools were experts at picking two points in space and using them to determine, with wonderful precision, their exact position on the globe. This expertise did nothing for them in their personal lives, though. There is no promontory high enough to allow you to triangulate five years into your past, and ten years into your future, to determine, with wonderful precision, whether you should pursue the lovely girl you met at the market three days ago. There is no astrolabe so precise that it will tell you whether buying an enormous diamond will win a woman’s heart. No mathematics compare to children at play, or to a quail’s egg, or to sheets of tears and sweat.

Photographs from my first week in Cuenca are here.