Sahagún was once an important town, my guidebook says, but “owing to the lack of stone for building purposes, many of the grand edifices were constructed with brick and, accordingly, many have disappeared.” I found an albergue by following my usual practice, of walking through town until the architecture became interesting, then checking my “Camino Pilgrim” Android app for the nearest place to stay. In Sahagún, this meant that I walked all the way through town, to the decayed remains of the Iglesia San Tirso, and then checked in next door. This albergue, El Labriego (“The Farmworker”), is a bar/restaurant next to the street with an albergue behind. That night a party started in the bar. A saucy, dark-haired woman in a tight rayon dress was encouraging everyone to dance and sing to the flamenco that was blasting out of the speakers. People were undulating and singing and clapping their hands and stomping their feet and shouting and waving cervesas when the proprietor, flushed and happy, gestured at the dark-haired woman, bent to my ear, and roared, “Typical Spanish!”

The next morning was cold. I walked for the first half hour with my poles tucked under one arm and my hands jammed in my pockets. The sun, when it finally rose, revealed even more nothing than usual; endless empty fields, and a path that paralleled the road for the entire day. The day ended in Reliegos, a town so small and insignificant that my usual method for finding lodging didn’t work at all; there was no interesting architecture to use as a starting point. I sat at a streetside table at the only open café, watching emaciated cats mince warily by, and wrote an email to a friend in which I described the place as “a genital wart on the 312th extra in a battle scene of a Bible epic that flopped at the box office of a town.” Sorry to quote myself, but I wanted to use that phrase more than once in my life.

I had breakfast the following morning in a lovely little town surrounded by a nearly complete medieval wall. From there, John Brierly, the author of the guidebook, encourages his readers to take a bus to León, rather than walk the remaining 18 kilometers through the city’s outskirts. John Brierly has walked the Camino more than a dozen times; it’s hard for me to imagine that he would offer this advice if he hadn’t become so casual about the idea of walking across Spain. And besides, the industrial outskirts of León aren’t so bad if you walk through them while listening to a podcast in which someone tells a story about the time Jim Morrison and Mama Cass Elliot came over to his house and danced with his performing circus monkey.

I came into León with no preconceptions. I knew it was a city large enough to justify a rest day, and that it possessed a cathedral, but that was all I knew. I didn’t know about its largely intact medieval wall, with long stretches that date back to the Romans, or about its enormous historic center, full of winding, narrow streets, jammed with cafes and tourists, or about the Museo Panteon San Isidoro de León, where I was shown an object that some people believe is the actual Holy Grail, and an 11th century frescoed ceiling, in superb condition and entirely unrestored, that is called “the Sistine Chapel of Romanesque Art,” or about the superb cathedral, whose perfect gothic vaults and more than 1400 square meters of medieval stained glass made spending an hour there feel too short. Everything in León closes at 2:00, so I returned to my hotel to update this blog before returning to the streets.

Tomorrow morning I’ll be getting out of bed before sunrise and walking out of this city, likely never to see it again. This thought would hardly be bearable, except that it is only by leaving that I can see all the interesting things that are waiting for me a day or two down the road. I wish I had a memory that might give me some consolation in 2047 – that might allow me to stop worrying for a few minutes about why the nurse is trying to poison me, relax against the bed restraints, and replay days like today in León. 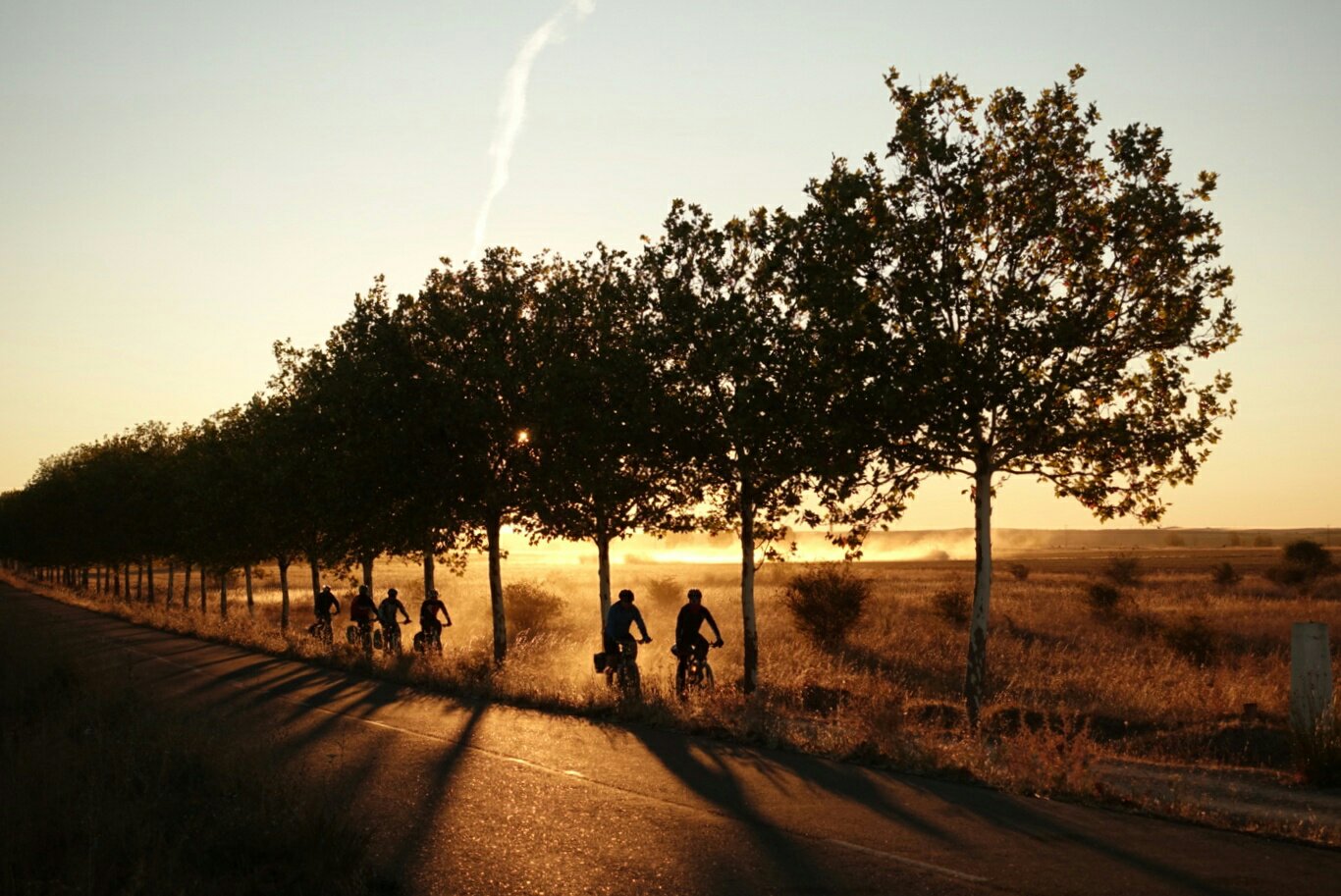 Bicyclists on the Camino at dawn. 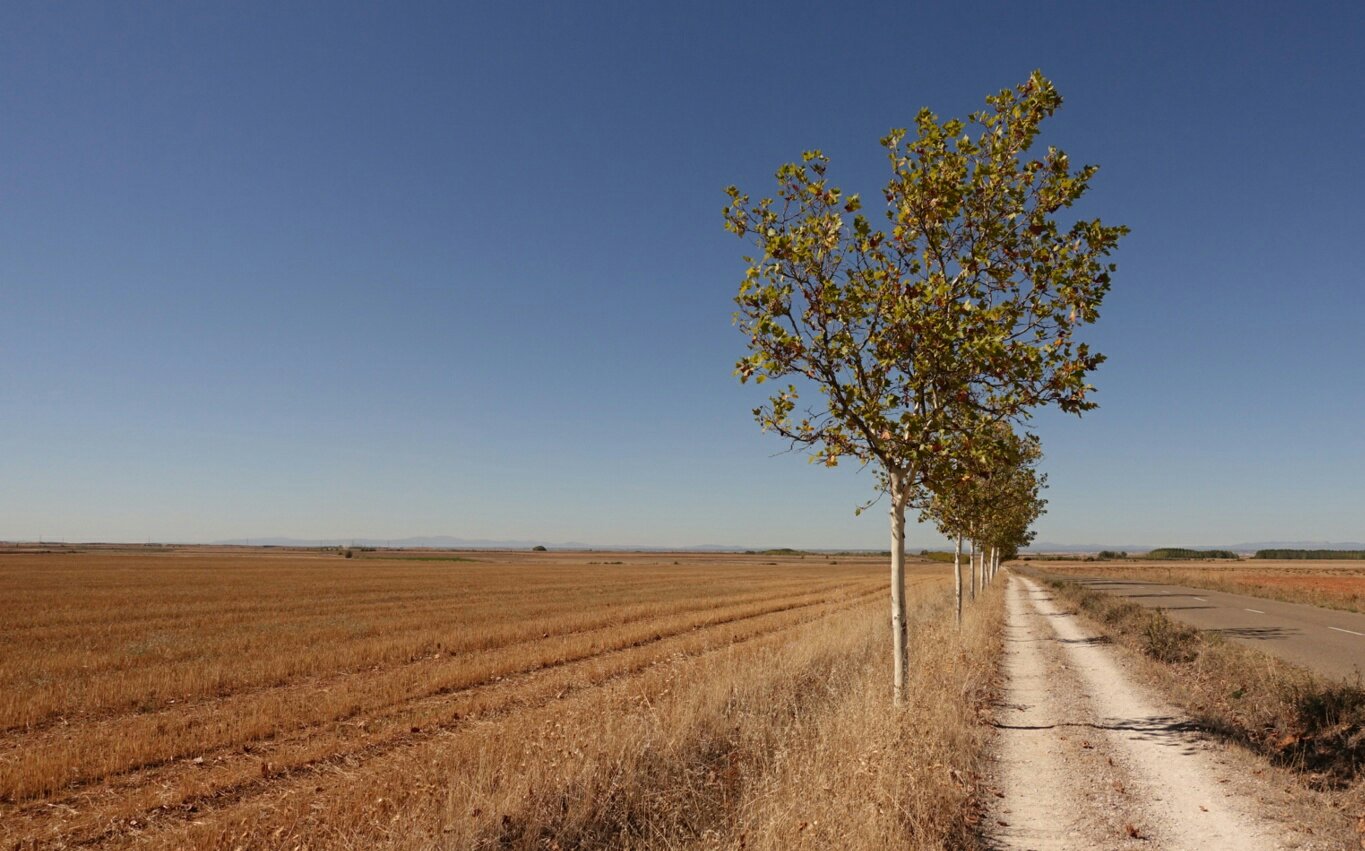 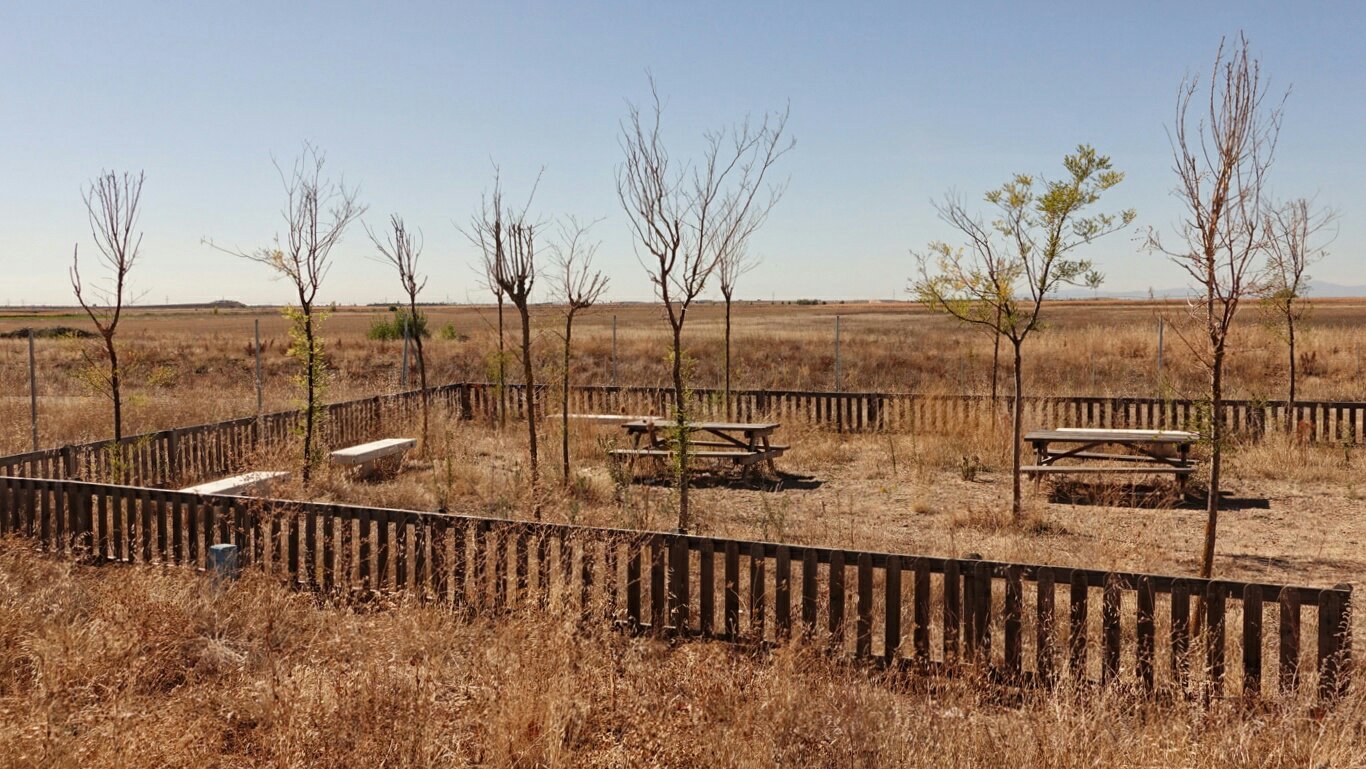 This rest area, although it has no water and no shade, does boast one sapling that is not yet dead. 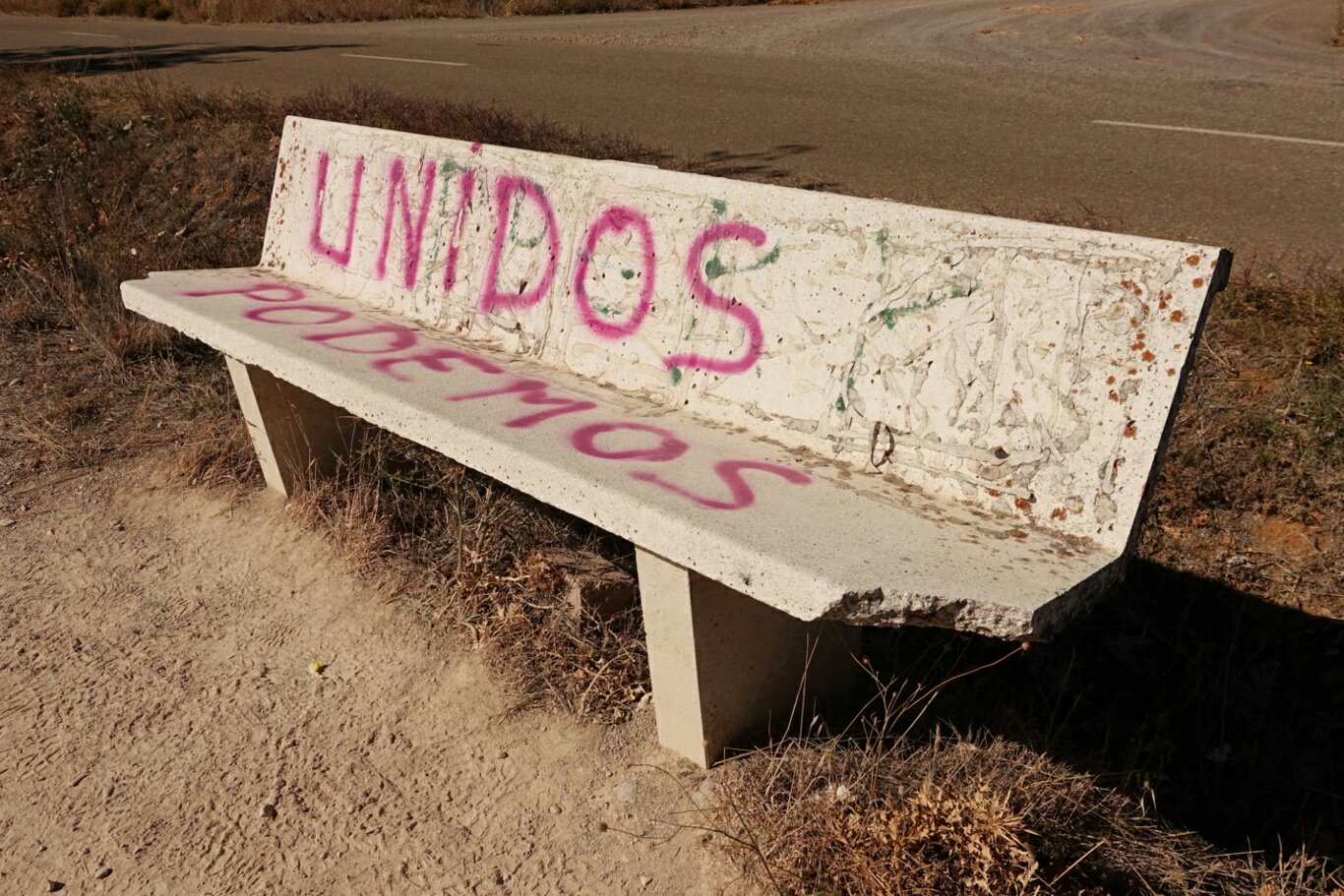 Catalan independence doesn’t seem to be popular in northern Spain. 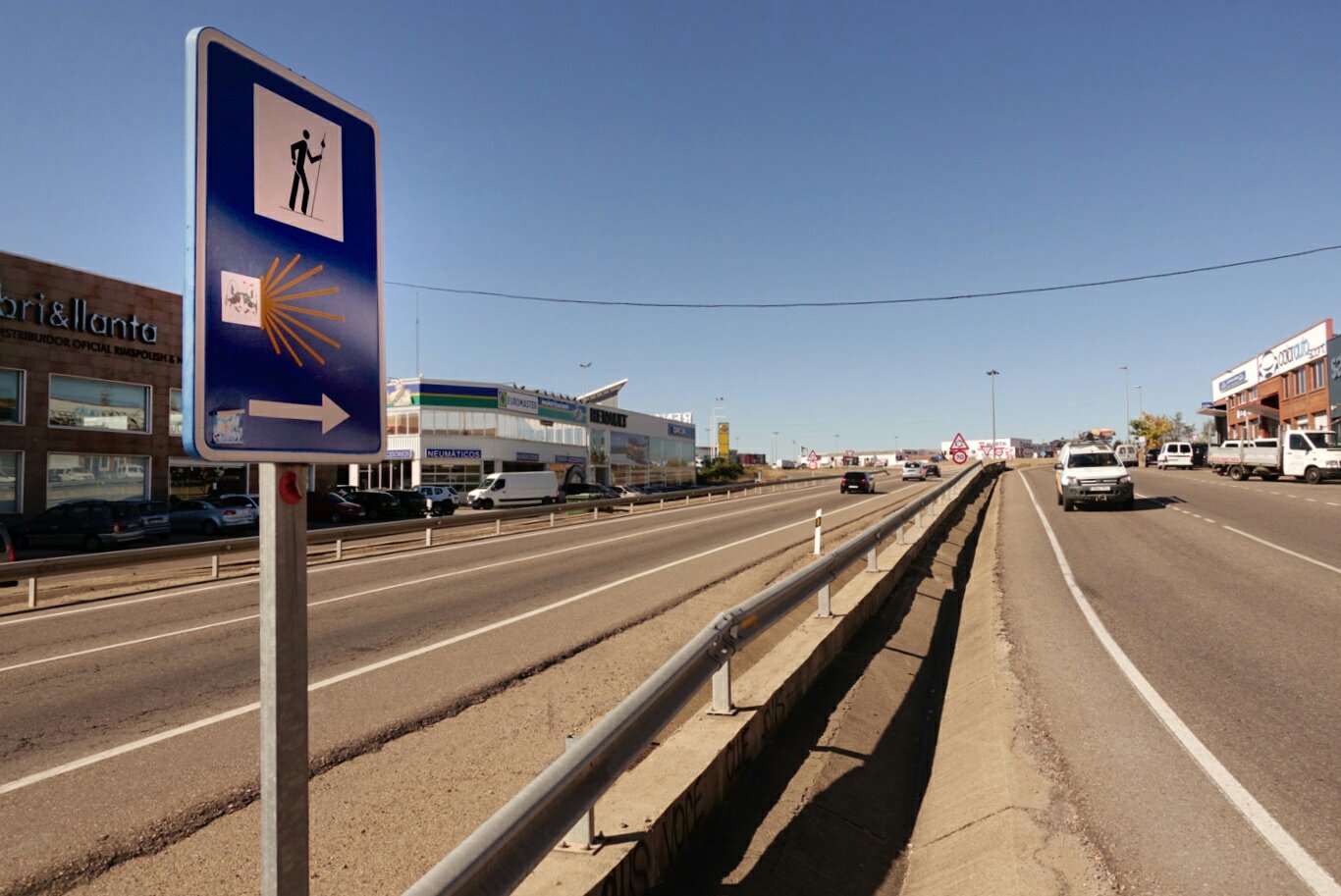 This part of the Camino is between the guardrail and the stripe of white paint. 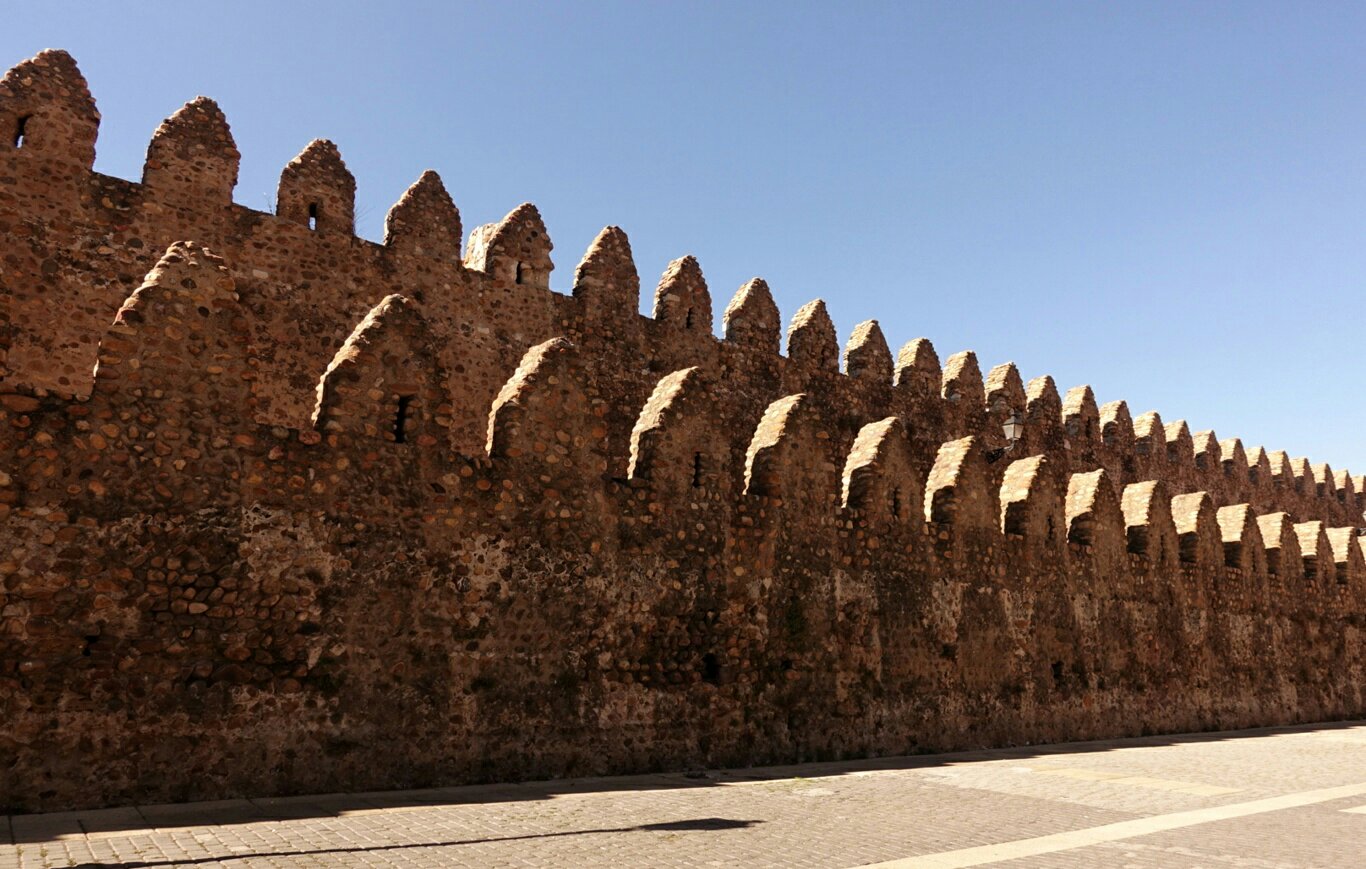 The medieval wall at León. 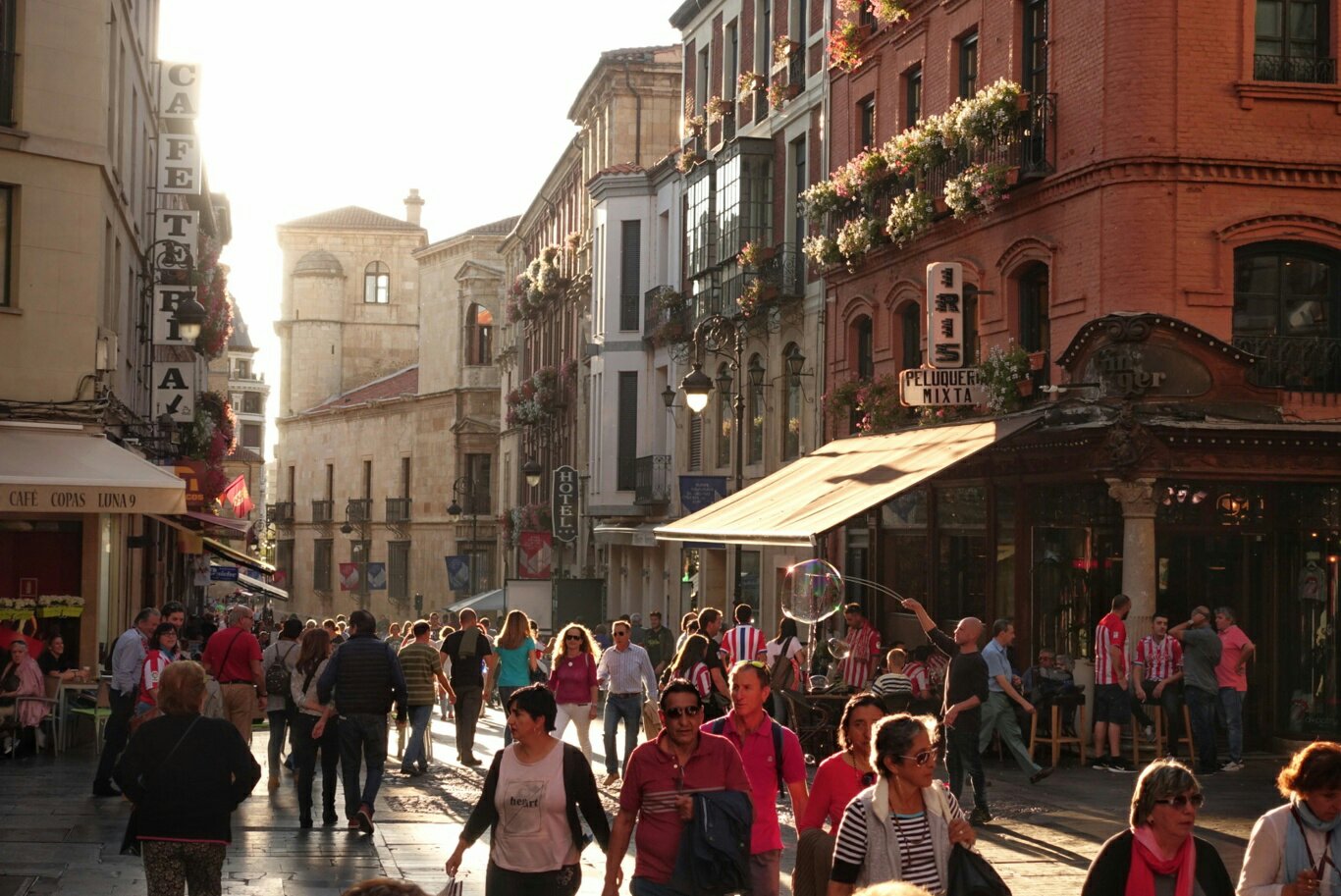 The harrowing loneliness of the blower of giant bubbles.