The fields outside Pamplona are stubble, or even less – clods of ocher dirt and stones. White snails cling to the wild anise that lines the trail. At the high point on the trail, where the wind turbines turn with such slow, solemn gravity and the pilgrims jostle for photographs in front of the sheet-iron Camino art, the climate changes. The trail leading down to the villages of the plain runs through glades of oak, and then through almond trees, heavy with mistletoe. Today there have been olive groves and grape orchards and sugar cane and prickly pear. A walking pace is fast enough to see the world change, if you walk long enough.

I have only been walking for five days – enough time for my feet to have started to complain, but not enough to toughen them. I expect it to take another week or so for the discomfort to ease. I smear antibiotic cream around the blisters and frown over the meticulous dressing; barring bad luck, I’ll be fine. An awful lot of my fellows at the Municipal Albergue here in Estella are limping, so my experience is not unique. I sat in the sunny common area for a little while when I arrived today and watched person after person pause at the top of the high step that leads down to the courtyard, squint their eyes, and then totter over the edge like a fledgling leaving the nest, grimacing and holding their elbows high. Some sad-looking people were soaking their feet in tubs of water.

I met a good person yesterday, a woman of about my age, who has an excellent attitude about committing herself to adventures but may be too big and untrained for this amount of exercise. I hope I’m wrong about this, and I may well be, but she is suffering. She and I were trapped together in the restaurant in Puente la Reina while the bulls had taken over the street; she told me about traveling in Turkey, and about how she has been able to take her 87-year-old mother on some interesting trips, using a wheelchair, and about how she had always thought of the distracting inner voice when she meditates as a kind of an obnoxious, chattering monkey, which she combats by visualizing an actual monkey in her lap, imagining every detail of its fur, and how it looks up at her while she breathes in and breathes out. She had found the walk from Pamplona difficult, but she is not a quitter. “Slow and steady,” she said.

I passed her on the trail this morning at about 9:00. She had left Puente la Reina at 7:00, and I at 8:00 – her expression changed at the realization that I was traveling at twice her speed. I walked at her pace for a few minutes, up a moderate slope, but, when she stopped to gasp and suggested that we each get to the top at the pace we found comfortable, I left her with a “Buen Camino.”

Dear God, I hope she makes it.

I wrote the preceding words yesterday, in the little town of Estella, where the twelfth-century churches and kids playing soccer in the square and narrow streets with laundry hanging from balconies high overhead hardly seem worthy of note, they are so expected a part of the scenery by now. I enjoyed watching a self-satisfied little girl in the square, who walked by me with a knowing look and a face absolutely covered in lipstick; when her mother discovered what had happened, a minute later, she wiped off her daughter with businesslike efficiency, entirely deaf to the girl’s screams of rage, and then set her free, whereupon she instantly clapped a stopper on it and bounced off to find new mischief to perpetrate. I was charmed by the familiarity of the little scene.

The wifi in the municipal albergue was pretty good, and people started bustling around at 5:30 in the morning, making a quantity of noise that really can’t be slept through, even though they’re being as quiet as they can reasonably be. This was my opportunity to use Skype to call my son’s cell phone, since at 6:00 in the morning here it’s 9:00PM for Sam, in the Bay Area. It was great to talk to him. His incredible run of success continues; he has just landed a job as a “junior software engineer” at a company that does hard brain stuff for smart people. Sorry, but I can’t really be much more specific about his new employer, Protein Metrics, whose website brags that, with their help, I can now “Automate peptide mapping – with ease!” I feel like Orville and Wilbur Wright’s father – “You say you’re doing what with those bicycles, now?” Sam’s concerns are for things like his commute, in the few weeks he’ll have before moving closer to the company, and about how difficult it’s going to be to continue to be the Dungeon Master of his D&D group when he’s living on the far side of the bridge. These are such great problems to have.

Then, since it was still evening on the West Coast and Oh-Dark-Thirty in Estella, I called my brother Bob, who is continuing to work himself half to death in Astoria. He and I will be meeting in Barcelona at the end of October, doing some touring in southern France, and then meeting his old exchange student, Saskia, and her husband Rein in Rome. This is going to be a wonderful end to my trip to Europe, but there is a lot of planning to be done to get ready for it. He and I will both be flying back to the United States on November 15, although we’ll be on different flights.

The walk from Estella to Los Arcos took me past the famous spigot of free wine – which I didn’t sample, since it was 8:00 in the morning and I had a lot of hiking to do – and then up into a lovely forest of oak and pine, with vistas of cliffs and ruined castles on hilltops in the distance. Los Arcos itself is not as charming as most of the villages where I’ve been staying, but it’s a relief, in a way, to be staying somewhere that doesn’t feel like a history lesson. The square is nice, the church is old, the food is slow, the beer is cold – and now my story is all told. (Apologies to Dr. Seuss.)

The standard itinerary, at this point, is to break up the next part of the journey into two short stages – of 18.3 and 9.5 kilometers – taking two days to arrive in Logroño, the next big town. I think I’ll try to walk the entire distance of 27.8 kilometers tomorrow, but I reserve the right to change my mind if my feet say “No.” I’ll be taking a rest day in Logroño, so I’d like to have earned it.

After getting settled in the albergue at Los Arcos, I found an unoccupied table in the square and, to the consternation of the waiter, ordered a cheese, egg, and aioli sandwich. While I was eating it, my slow and steady friend from Puente la Reina walked up the street, wearing her backpack and leaning on a stick, but looking surprisingly fresh! I was delighted to see her. May I be so wrong more often.

On the way to Estella. 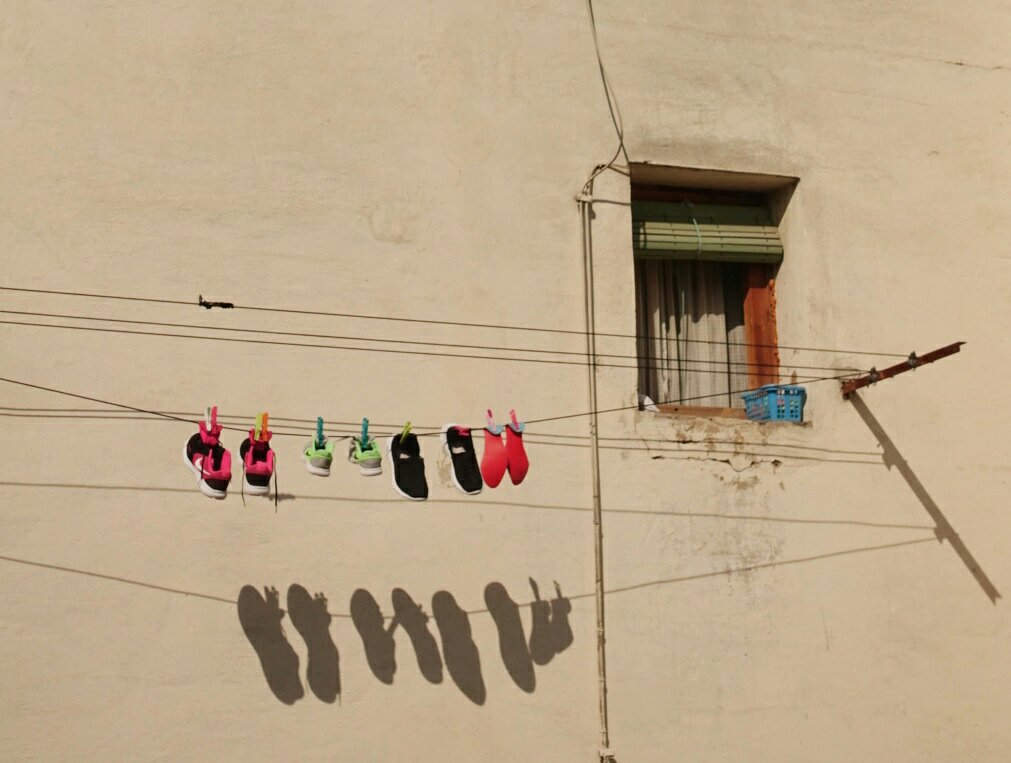 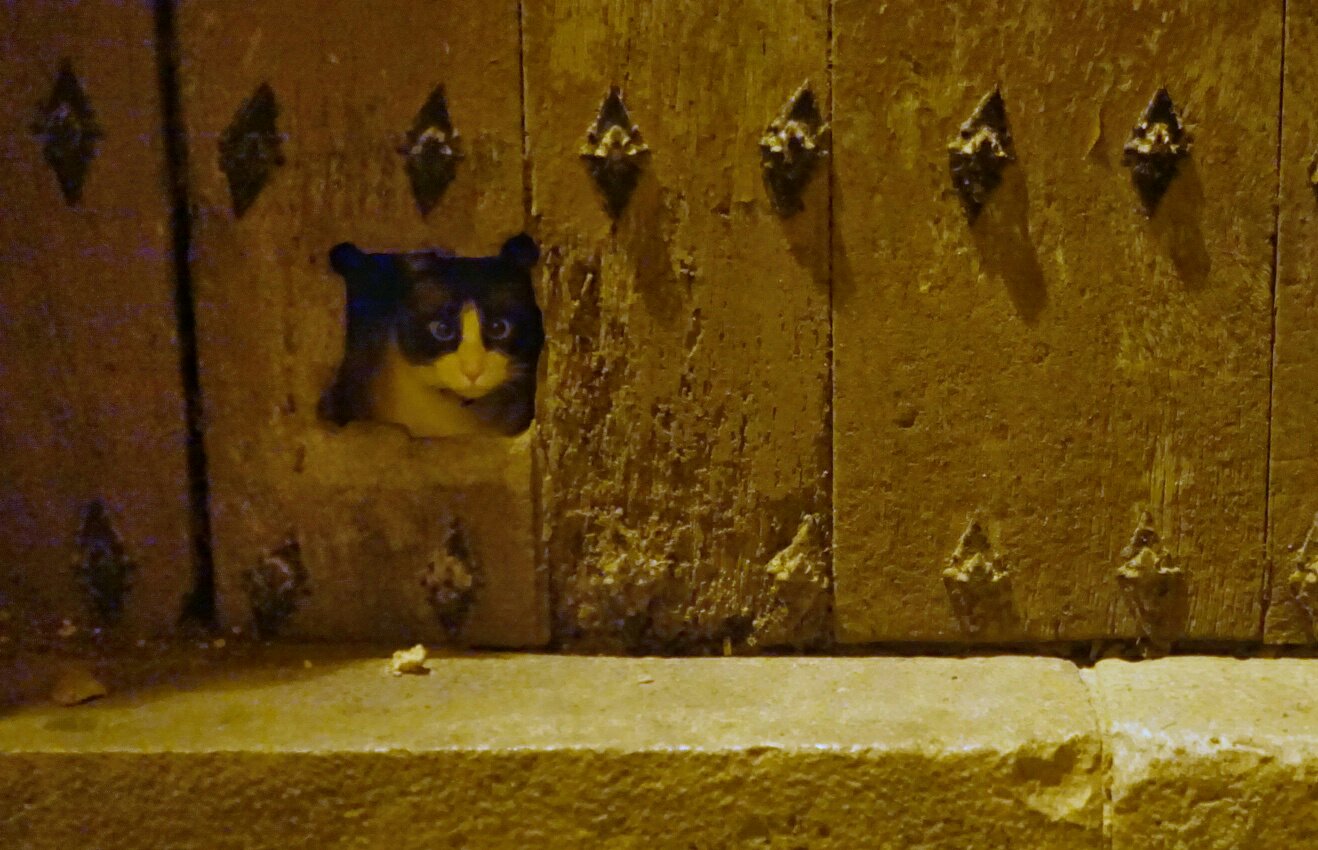 I was watched while leaving Estella in the darkness this morning.

A morning view of the cliffs north across the valley. 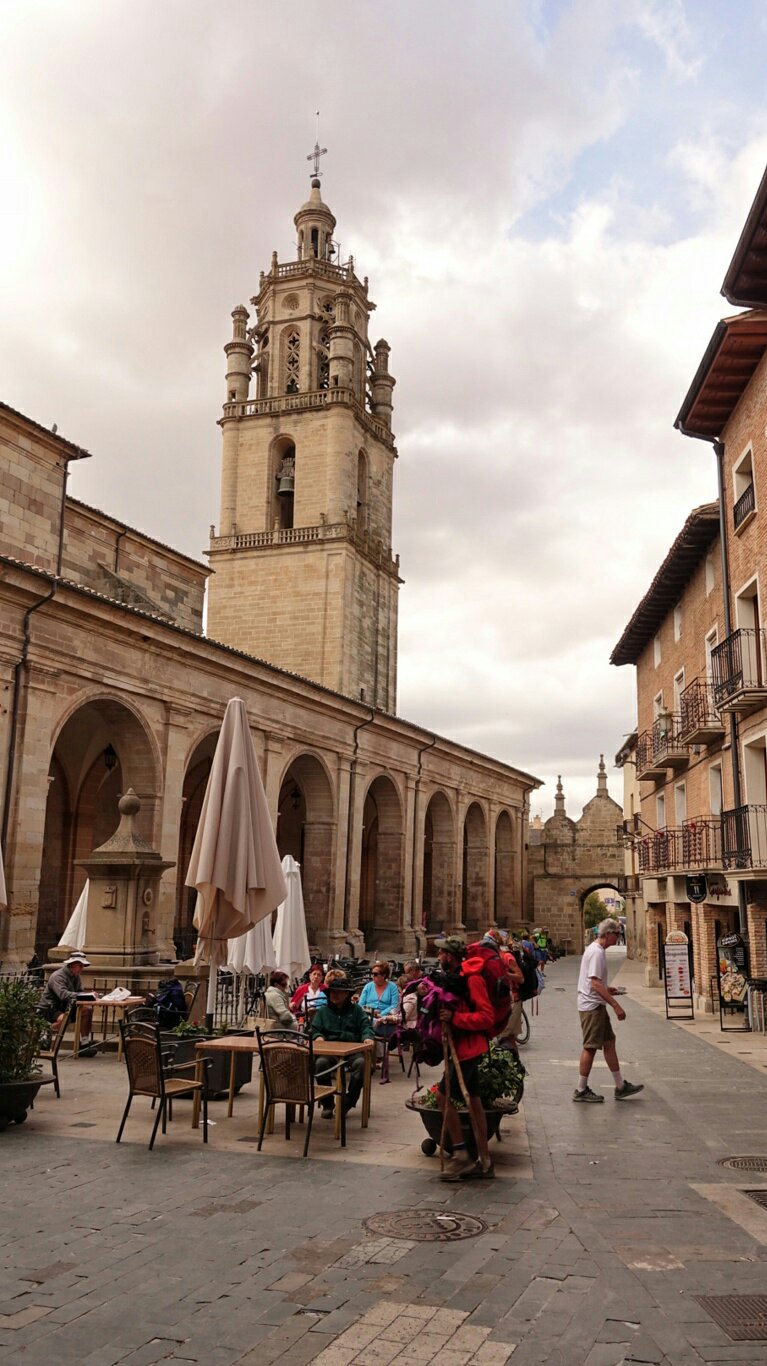 The square in Los Arcos.